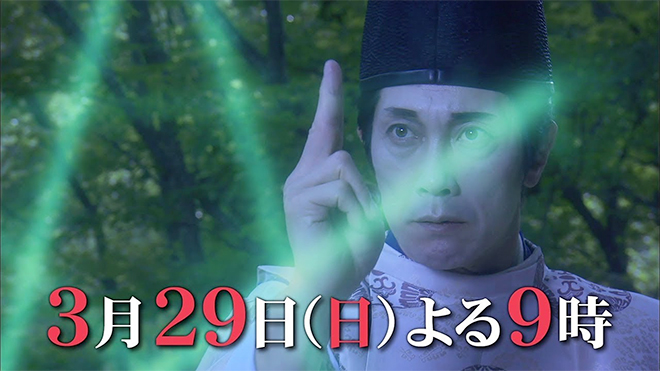 Date: From 9.00 p.m., 29 March 2020
Original Work: Onmyoji Takiyashahime by Yumemakura Baku
Scriptwriter: Yamamoto Mutsumi (Byouin no Naoshikata, Kounodori Season 1, Yae no Sakura)
Cast: Sasaki Kuranosuke, Ichihara Hayato, Goriki Ayame, Honda Miyu, Saito Megumi, Hashimoto Jun, Sakou Yoshi, Fueki Yuko, Kaneko Noboru, Akisawa Kentaro, Minamide Ryoka, Tsukumo Hajime, Okuda Tatsuhito, Kawano Taro, Oide Shun, Sugata Shun, Masu Takeshi, Terada Minori, Kunihiro Tomiyuki, Takenaka Naoto
Synopsis: It is the year 960 during the Tentoku era. The exorcist Abe no Seimei (Sasaki Kuranosuke) and his friend Minamoto no Hiromasa (Ichihara Hayato) are drinking together as they talk. According to Hiromasa, a woman with a white headdress and men in black masks broke into Ono no Yoshifuru’s (Kawano Taro) estate in the dead of night. They searched around for something he was holding for Jozo (Terada Minori) of Ungoji but left without taking anything. The two of them are puzzling over this strange story when Seimei’s senior disciple Kamo no Yasunori (Hashimoto Jun) arrives. Yasunori feels that the hideous pox on the face of Taira no Sadamori (Sakou Yoshi), who was involved in quelling the revolt of Taira no Masakado 20 years ago, is the result of someone’s curse and wants him to come and take a look. Seimei and Hiromasa visit Sadamori’s residence and get a briefing from the doctor Shosen (Masu Takeshi) and his assistant Kisaragi (Goriki Ayame). They are shocked to see Sadamori’s pox. When Seimei places his hand on Sadamori’s forehead, an eyeball appears … … Seimei tells Hiromasa that someone has started taking over Sadamori. Meanwhile, Seimei hears of another episode of the heroism of Tawara no Tota (Kunihiro Tomiyuki) who is said to have made an appearance again and fought off thieves. He realises that the string of peculiar incidents are linked to a person. Ono no Yoshifuru, Taira no Sadamori and Tawara no Tota all stood against Taira no Masakado. But Masakado perished in the revolt 20 years earlier. Seimei finds out from Jozo that the ashes that had been searing Masakado’s head for two months was stolen by someone. He is convinced that the ashes which the woman with the white headdress has been searching for, is necessary to bring Masakado back to life. Intrigue is rife in the Heian capital and a fierce battle like never before is about to begin.
Official Website: www.tv-asahi.co.jp/onmyoji2020

This blog contains information and musings on current and upcoming Japanese dramas but is not intended to be comprehensive.
View all posts by jadefrost →
This entry was posted in Spring 2020 Drama Specials, TV Asahi and tagged Honda Miyu, Onmyoji, Sasaki Kuranosuke. Bookmark the permalink.