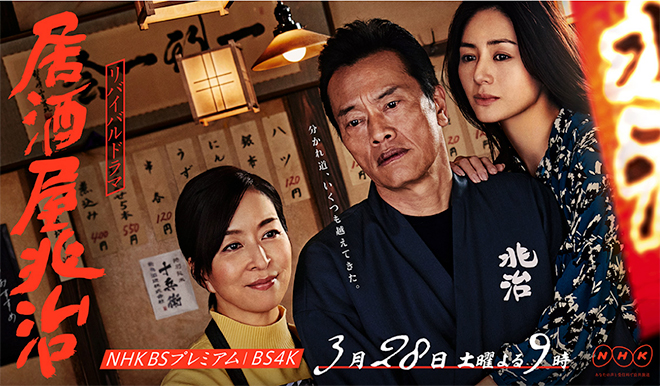 Date: From 9.00 p.m., 28 March 2020
Scriptwriter: Sakurai Tsuyoshi (Fuwaku no Scrum, Bakumatsu Gurume Series, Marumo no Okite Series)
Original Work: Izakaya Choji by Yamaguchi Hitomi
Cast: Endo Kenichi, Igawa Haruka, Watanabe Ikkei, Nishimura Masahiko, Tezuka Toru, Tokui Yu, Ueshima Ryohei, Musaka Naomasa, Fujita Tomoko, Ishibashi Renji, Maya Miki
Synopsis: Fujino Denkichi (Endo Kenichi) runs Choji, a small Japanese-style bar, with his wife Shigeko (Maya Miki). He is called Choji by customers, just like the name of the bar. Although he is a taciturn and brusque man, business has been fairly brisk. Denkichi’s regular customers include his childhood friend Iwashita (Watanabe Ikkei) and Kawahara (Nishimura Masahiko) who has a bad drinking habit. His immediate worry is the talk that Choji will have to move out because of redevelopment but the new location has not been decided. One day, Denkichi’s first love Kamiya Sayo (Igawa Haruka) visits Choji all of a sudden. Her words “It’s your fault” before she vanishes makes him falter. In fact, Sayo is suspected of setting her home on fire and her husband and the police are seeking her whereabouts. Has she not been able to forget Denkichi whom she has not met in close to 30 years? Denkichi used to be the ace of a corporate baseball team and Sayo was his girlfriend at that time. After he damaged his shoulder, he became a salaryman but he was ordered to take charge of laying off 100 employees at the company and he resigned. He trained at a shop for roast giblets and then became the owner of Choji. His loving wife has supported him through these various forks in the road and always watched over for him. On one occasion, Kawahara makes fun of the sudden death of a regular customer’s wife which causes Denkichi to lash out and injure him seriously. He is arrested but the interrogation is pressed about Sayo and not Kawahara. Meanwhile, Sayo, who is unaware of the commotion, shows up at Choji once again while Shigeko is holding the fort, and the two women come fact to face. Denkichi is finally released and returns to his daily routine. Then he suddenly gets unexpected news about Sayo … …
Official Website: www4.nhk.or.jp/P6263

This blog contains information and musings on current and upcoming Japanese dramas but is not intended to be comprehensive.
View all posts by jadefrost →
This entry was posted in NHK, Spring 2020 Drama Specials and tagged Endo Kenichi, Igawa Haruka, Izakaya Choji, Maya Miki. Bookmark the permalink.