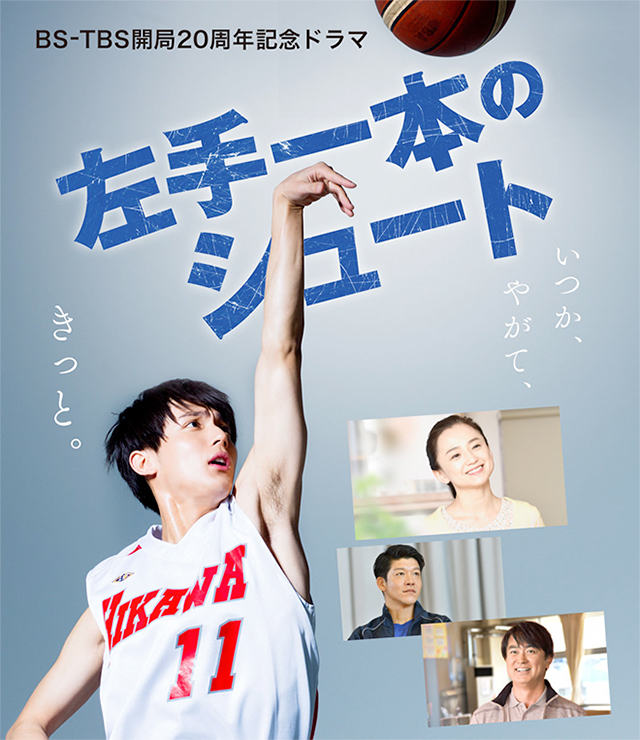 Date: From 9.00 p.m., 14 March 2020
Scriptwriter: Yoshida Noriko (Dying Eye, Mistresses, Kataomoi)
Original Work: Hidarite Ippon no Shuto ~ Yume Areba Koso! Noushukketsu Migihanshin Mahi kara no Fukkatsu by Shimazawa Yuko
Cast: Nakagawa Taishi, Suruga Taro, Ando Tamae, Katsuya, Ishiuchi Roi, Hosoda Kanata, Toyoda Shinmaru, Maeda Oshiro, Sugawara Ken, Suzuki Kei, Irie Kaito, Watanabe Tetsushi, Tomoyan, Takaoka Rinka, Koichi Mantaro, Iida Kisuke, Yoshizawa Ken, Harada Kana, Ishiguro Ken, Nagasaku Hiromi
Synopsis: Three days before the high school entrance ceremony in April 2007, Tanaka Masayuki (Nakagawa Taishi), who had been active in basketball during junior high school, participates in an away game for Hikawa High School’s basketball club which he is set to join. But he suddenly collapses at the venue of the match and loses consciousness. Masayuki is hurried to a hospital accompanied by the basketball club’s adviser Yoshida Koji (Suruga Taro). The doctor Miyazaki Hiromichi (Iida Kisuke) diagnoses brain haemorrhage due to cerebral arteriovenous malformation. Masayuki’s mother Kazume (Nagasaku Hiromi), father Masaki (Koichi Mantaro) and even his mentor Morikawa Toru (Ishiguro Ken), the adviser to Tatomi Junior High School’s basketball club, rush over to the hospital after phone calls from Yoshida. Although his life is saved by an emergency surgery, he remains in a coma for several days. When Masayuki finally wakes up, the right side of his body is paralysed. It is a difficult reality for him to accept. He deflates after hearing Miyazaki say it will be tough for him to play basketball as he had done in the past. His mother visits the hospital intending to cheer him up but sees him doing walking exercises in the rehabilitation room as if one’s life depends on it. Masayuki tells her, “I won’t give up. I’ll play basketball.” He begins rehabilitation as he focuses on his dream of standing on the basketball court once again. In June, Masayuki transfers to a rehabilitation hospital and works with physiotherapist Maruya Moriyasu (Katsuya) and a staff Onuki Haruna (Harada Kana). In April 2008, Masayuki finally starts high school life one year later with the support of Yoshida, Morikawa, his junior high school form teacher Ninomiya Noriko (Ando Tamae) and the rehabilitation trainer Kashiwagi Masayoshi (Yoshizawa Ken). He also develops bonds with his teammates, classmates and schoolmates. Even though Masayuki is not able to participate in matches, he becomes indispensable to Hikawa High School’s basketball team because of the precise instructions he gives from the bench. Morikawa’s casually murmured words that Masayuki will surely play again someday spurs him to continue working towards his dream. Will Masayuki be able to make his comeback to the court?
Website: www.bs-tbs.co.jp/hidarite
Twitter: twitter.com/hidarite_bstbs

This blog contains information and musings on current and upcoming Japanese dramas but is not intended to be comprehensive.
View all posts by jadefrost →
This entry was posted in Spring 2020 Drama Specials, TBS/MBS and tagged Hidarite Ippon no Shuto, Ishiguro Ken, Nagasaku Hiromi, Nakagawa Taishi. Bookmark the permalink.