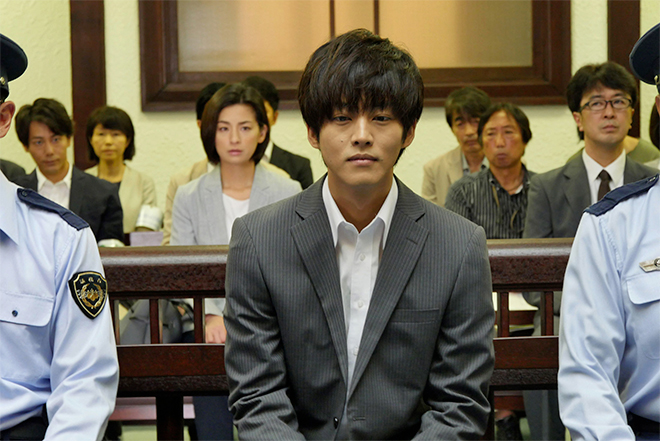 Date: From 9.00 p.m., 1 March 2020
Scriptwriter: Hata Takehiko (Tokumei Keiji Kakuho no Onna Series, Soshite Daremo Inakunatta, Maruho no Onna)
Original Work: Hohoemu Hito by Nukui Tokuro
Cast: Matsuzaka Tori, Ono Machiko, Namase Katsuhisa, Fukuda Tenkyuu, Tanaka Yoji, Abe Ryohei, Yakumaru Sho, Sato Nori, Kokubo Toshihito
Synopsis: Nito Toshimi (Matsuzaka Tori) has been charged with the murder of his wife and young child. At his trial, he reveals a shocking motive for the crime, “I wanted space for books.” Nito is the accused in the Azumigawa Case, named after the river in the northwestern part of Sagamihara City, Kanagawa Prefecture where he drowned his wife Shoko (Kanko) and daughter Amina (Iketani Mion) one and half years ago. After graduating from Japan’s most difficult university, he found a job at a major city bank. He got married to Shoko whom he met while working at a bank branch. They moved into an upscale apartment building in Setagaya and had their daughter a year later. Nito led a life that looked like the picture of happiness and was the envy of everyone. Why would he murder his wife and child? Kamoi Akira (Ono Machiko), a reporter with the weekly magazine Shukan Kaichou, had been personally acquainted with Nito before the crime because their daughters go to the same kindergarten. She cannot accept the motive he spoke about in court and goes straight to her editor Inoue Hajime (Namase Katsuhisa) with a vow to expose the truth. Akira is promised the opening pages of the magazine and begins to delve into Nito’s character as she conducts interviews with people who know him as well as people familiar with the case. The more she learns about the situation when the ambulance crew arrived on the scene and the circumstances at the hospital where his wife and daughter were transferred to, her suspicions about him gradually grow. Akira wonders which is the real Nito – the man with the gentle smile that she had known or the one that she hears from all these people. She seems overwhelmed by a mixed bag of feelings. Nito’s shocking past eventually comes to light and she finds out that several more people associated with him had died under suspicious circumstances.
Website: www.tv-asahi.co.jp/hohoemu

This blog contains information and musings on current and upcoming Japanese dramas but is not intended to be comprehensive.
View all posts by jadefrost →
This entry was posted in TV Asahi, Winter 2020 Drama Specials and tagged Hohoemu Hito, Namase Katsuhisa, Ono Machiko. Bookmark the permalink.