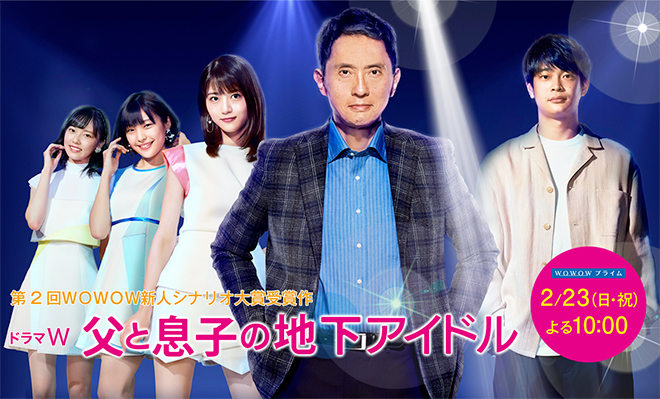 Date: From 10.00 p.m., 23 February 2020
Scriptwriter: Mitsumasu Yoshiyuki
Cast: Matsushige Yutaka, Wakatsuki Yumi, Imai Yuki, Imou Haruka, Kato Konatsu, Endo Kumiko, Tsuruta Mayu, Takimoto Miori, Fukami Motoki, Inowaki Kai
Synopsis: Sendo Masumi (Matsushige Yutaka) is a middle-aged Japanese language teacher at Fujiura High School who once taught students with passion in the traditional way. However, this no longer works with the children nowadays and he feels frustrated. A widower who lives alone, he has been estranged from his only son Katsuyoshi (Inowaki Kai) ever since he opposed Katsuyoshi’s career in music. One day, Sendo is suddenly informed that Katsuyoshi was involved in a traffic accident and rushes over to the hospital. He sees his son lying there in a vegetative state. While Sendo is standing there in a daze, three young ladies dressed in colourful costumes unexpectedly arrive at the ward. They are Kiyonaga Shiina (Wakatsuki Yumi), Hashimoto Reo (Imou Haruka) and Ato Hirari (Kato Konatsu) of the underground idol group Otomegatari that Katsuyoshi created. Although the group is on the verge of breaking up, Sendo is so moved by the enthusiasm of the girls that he makes the decision to become an idol producer on his son’s behalf. He struggles hard to protect the group until Katsuyoshi wakes up even though the special world of underground idols bewilders him, but … …
Website: www.wowow.co.jp/dramaw/chika_idol

This blog contains information and musings on current and upcoming Japanese dramas but is not intended to be comprehensive.
View all posts by jadefrost →
This entry was posted in Winter 2020 Drama Specials, WOWOW and tagged Matsushige Yutaka, Papa to Musuko no Chika Idol, Tsuruta Mayu. Bookmark the permalink.