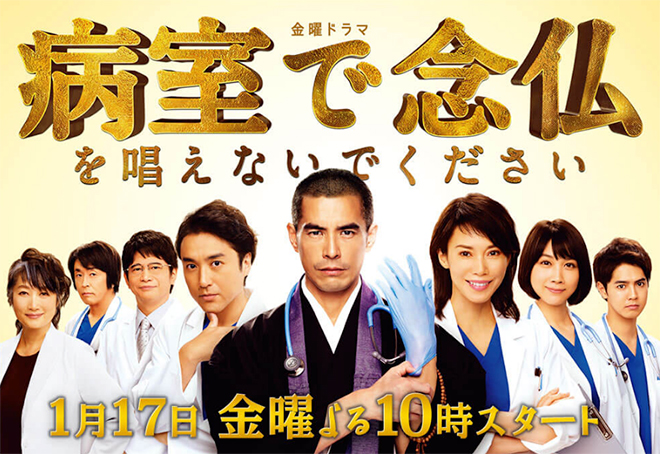 Story
Matsumoto Shouen entered monkhood because he could not rescue his childhood friend who was drowning right in front of him when he was a kid. Wanting to save the lives of the people important to him in their last moments, he also aspired to be a doctor. At Aobadai Hospital’s Emergency Medical Care Centre, Matsumoto provides medical care as an emergency doctor and also chants sutra for the deceased at the morgue or provides spiritual care for terminally ill patients as a Buddhist monk. Although he is disliked not only by patients but also colleagues for chanting prayers to Buddha and preaching for everything, he is cheerful and sincere. As Matsumoto grapples with how he should save lives, attend to deaths and support the families of patients, he grows as a doctor, a monk and a person. One day, emergency patients who were involved in a car accident are brought over to the Emergency Medical Care Centre. While the emergency doctor Miyake Ryoko, houseman Tanaka Reiichi, orthopaedic surgeon Aida Ippei are swamped, Matsumoto runs in in his robes and sneakers. He treats a woman called Yoko who was in the car that caused the accident. Although Yoko hangs on to life, she does not regain consciousness and remains in the intensive care unit. However, the next day, her condition suddenly takes a turn for the worse and she is pronounced brain dead. Matsumoto has no qualms asking her 13-year-old son Shota to make a decision about her treatment but … … Meanwhile, Hamada Tatsuya, an excellent cardiovascular surgeon who has also practiced overseas, is seconded from a university hospital to the department of cardiovascular surgery. Aobadai Hospital’s chairwoman Shibusawa Wakako is delighted to welcome Hamada and is about to introduce big changes to the hospital.

Characters
Ito Hideaki as Matsumoto Shouen
An emergency doctor at Aobadai Hospital’s Emergency Medical Care Centre and the hospital’s monk who provides spiritual care for patients. Believing the death of a childhood friend was his fault, he entered monkhood because of that trauma and became a doctor to save lives. He is disliked for chanting prayers to Buddha in hospital wards. And at times, he makes patients fearful that they are near death when he performs emergency medical treatment in his black garb. However, is deadly serious about saving lives both as a monk and a doctor. He is mocked as a “degenerate monk”, “depraved monk”, “monk in cosplay” as he eats a lot, drinks alcohol and collects sealed lewd magazines.

Muro Tsuyoshi as Hamada Tatsuya
An elite cardiovascular surgeon who graduated from a prestigious university and also had clinical training in the US. A famous heart surgeon who is respected in the medical association and even performs pediatric cardiovascular surgery which is especially difficult. He has even been covered in the media. He came from a university hospital with much fanfare after he was invited by Shibusawa Wakako, the chairwoman of Aobadai Hospital who wants the hospital to be known for cardiovascular surgery and expand its operations. He believes in treating patients through “exquisite surgeries” and discharging them from hospital, and clashes with Matsumoto Shouen who will resort to seemingly reckless measures in order to save lives.

Matsumoto Honoka as Kojima Mashiro
A rookie heart surgeon who works under Hamada Tatsuya. She is still in the early days as a medical specialist. Although she is highly competent, she cracks under pressure. After she made a mistake while she was Hamada’s surgical first assistant, she was treated as worthless and had her role taken away from her. However even though she is left-handed, her skills itself are not bad with the help of her right hand. Then she meets Matsumoto Shouen and starts to question Hamada’s focus only on achieving results and heart surgeons’ condescending attitude towards emergency medical treatment. She wants to be involved in the emergency medical care which saves lives but … …

Horiuchi Ken as Aida Ippei
An intolerable orthopaedic surgeon who behaves as if he is an intellectual and has an insolent attitude. However, he is a sincere and outstanding doctor with a personality that is difficult to grasp. While he cares about patients and will stay in the hospital for those that he operated on, he makes a deal with Matsumoto Shouen regarding the patients he accepts from Emergency Medical Care Centre. He has to have the last word when he trade insults with Matsumoto, but he understands emergency medical care and supports the Emergency Medical Care Centre, which is in conflict with all sections in the hospital, from behind the scenes.

Yo Kimiko as Shibusawa Wakako
The chairwoman of Aobadai Hospital. She has been a friend of the monks of Enmyoji from a long time ago and specially hires Matsumoto Shouen, who was at the temple, to be an emergency doctor and monk at Aobadai Hospital. She also knows the teachings of Buddhism and casually offers hints to Matsumoto who is the source of friction in the hospital and agonises over emergency medical care on the frontline. On the other hand, she makes tough decisions as the chairwoman and it is difficult to know what is on her mind. She has brought the cardiovascular surgeon Hamada Tatsuya in with the aim of expanding the hospital’s operations. She is well connected with university hospitals, government administration and even politicians.

Hagiwara Masato as Tamai Junichiro
The head of the Emergency Medical Care Centre. He once aspired to in the Department of Internal Medicine. However, he was drafted to the Emergency Medical Care Centre which was short of people and could not escape. He could not bring himself to ask to change departments and by the time he realised it, he had become the head of the centre. Because he is a coward and indecisive to the extent that he even wavers on his choice of boxed lunch regularly, he feels bad about coming to the centre where decisions are constantly required. He wishes for peace and hopes Matsumoto Shouen will focus on emergency medical care. He lectures Matsumoto about behaving normally in his attempt to defend the position of the Emergency Medical Care Centre which is disliked within the hospital. While he is a veteran emergency doctor, his skills are average. He understands the feelings of hesitation of the weak and unenlightened.

Nakatani Miki as Miyake Ryoko
Matsumoto Shouen’s colleague at the Emergency Medical Care Centre. An attractive and capable emergency doctor with a candid personality. She also has a sensitive side. She is matter-of-fact and a realist who has survived in the harsh world of emergency medical care. On the contrary, Matsumoto has a tendency to be impulsive and cross the line between doctor and patient. While she often has conflicts with Matsumoto over irreconcilable points, they recognise each other’s abilities and have a relationship of trust.

This blog contains information and musings on current and upcoming Japanese dramas but is not intended to be comprehensive.
View all posts by jadefrost →
This entry was posted in TBS/MBS, Winter 2020 Dramas and tagged Byoushitsu de Nenbutsu o Tonaenaide Kudasai, Hagiwara Masato, Ito Hideaki, Matsumoto Honoka, Muro Tsuyoshi, Nakatani Miki, Yo Kimiko. Bookmark the permalink.