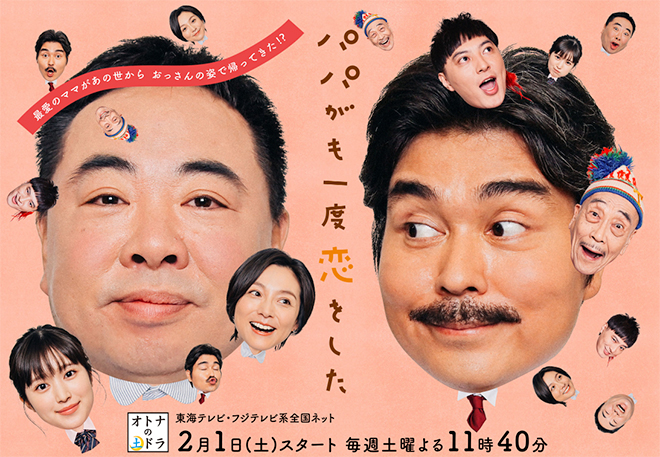 Story
Three years ago, Yamashita Goro lost his beloved wife Taeko in a traffic accident. Grieved by her death, he resigned from his job and confined himself to his room. His daughter Tomo worries about him and does her best with the housework. She believes that her cool and kind father will return some day. One day, a middle-aged man shows up at their house, claiming to be Taeko. Goro and Tomo stare at him in disbelief. However, Tomo’s grandfather Tarosuke cries out that this man is Taeko and says she has come back, which causes an uproar. How has Tomo’s beautiful and gentle mother been reincarnated as this man? Meanwhile, Taeko’s father Juro comes to Goro’s house. He has lost his patience with Goro who has not worked and even left the household chores to Tomo in these three years. He gives him an ultimatum to find a job within a week or he will take his granddaughter into his care. Goro cannot afford to lose his daughter as well and starts job hunting while the middle-aged man hovers around him … …

Characters
Ozawa Yukiyoshi as Yamashita Goro
He has been withdrawn ever since he lost his beloved wife Taeko three years ago. He used to work for a trading company and was a cool and kind father who was good at his job and loved his family dearly. However, his love for Taeko was so great that he has not been able to overcome the shock and accept her death. He still cannot bring himself to visit her grave.

Tsukaji Muga as Ossan Taeko
The reincarnation of Yamashita Taeko. Although she passed away three years ago, she could not stand watching her husband Goro behaving like a recluse and has somehow been given a new lease of life as a middle-aged man. She is perplexed but genuinely thrilled that she is able to live with Goro and the rest of the family again. She is gentle and endearing and with great cooking skills to boot. She is conscious of her leg hair and still girlish at heart.

Honjo Manami as Yamashita Taeko
Yamashita Goro’s wife who died in a traffic accident three years ago. She was like a goddess and the emotional anchor of the family. She was a beautiful woman with a gentle nature that made her likeable. Although she has been watching over the family from heaven, she cannot bear to see that her husband has not moved on and comes down to earth.

Fukumoto Riko as Yamashita Tomo
Yamashita Goro’s only daughter. A second year high student. She used to be a pampered child but after her mother died when she was in junior high school, she could not bear to watch her father become a social recluse. She has had little choice but to get a grip and to handle the housework. Although she wants to become a veterinarian because she loves animals, she is undecided about university.

Tsukamoto Takashi as Kato Eita
Yamashita Goro’s cousin who comes to the Yamashita residence very often. He is a trouble maker who constantly provokes Goro with choice words but Goro always forgives him. He claims that he has been travelling around the world for work but no one knows the truth.

Maro Akaji as Yamashita Tarosuke
Yamashita Goro’s father. He has been watching over his son who has been in despair ever since he lost his wife Taeko, but that deteriorated to him becoming a social recluse. He is the first to recognise his daughter-in-law in Ossan Taeko and shows excellent intuition at times.

This blog contains information and musings on current and upcoming Japanese dramas but is not intended to be comprehensive.
View all posts by jadefrost →
This entry was posted in Fuji TV, Winter 2020 Dramas and tagged Ozawa Yukiyoshi, Papa ga Moichido Koi o Shita. Bookmark the permalink.