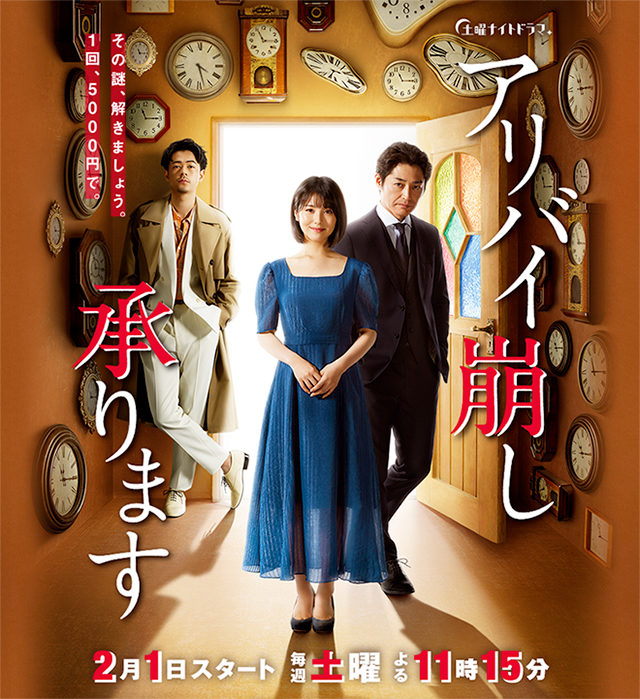 Story
20-year-old Mitani Tokino runs a clock shop at a shopping street far from the city centre in Nano Prefecture. Besides repairing clocks at the shop which she inherited from her late grandfather, the inquisitive Tokino is also a well-known closet sleuth. She will chip away at watertight alibis related to clocks and time for 5,000 yen on each occasion, and get to the bottom of the truth. One day, she encounters Saji Yoshiyuki, a career police officer with the Tokyo Metropolitan Police Department, who has been demoted to Nano Prefectural Police Headquarters after having the tables turned on him in his attempt to expose the corruption of an opposing faction. He ends up lodging at the main house behind Tokino’s clock shop in an unexpected turn of events. At that very moment, a man gets hit by a car right in front of them. When Tokino and Saji rush over to him, he mutters that someone was killed at an apartment building just now, then he loses consciousness. This man is Okuyama Shinichiro, a famous mystery writer. Saji heads to the apartment building that Okuyama mentioned and links up with detective Tokai Yuma, section chief Makimura Takumi and the medical examiner Higuchi Hideto. The dead body of Nakajima Kasumi is there just as Okuyama had told him. However, as the investigation progresses, it turns out that Okuyama has a solid alibi which makes it impossible for him to have committed the murder. After feeling terribly conflicted, the proud Saji secretly leaks investigation information and asks Tokino to undermine his alibi. Although he complains, he finds himself becoming a regular client and they partner to solve cases.

Characters
Hamabe Minami as Mitani Tokino
The young owner of Mitani Clock Shop at a shopping street in Nano City, Nano Prefecture. Her parents passed away in an accident when she was in kindergarten and she was taken in by her paternal grandfather who ran a small clock shop in Nano City. Since then, she developed an interest in repairing clocks and learned the skills. At the same time, she was trained by her grandfather, who was famous as an alibi breaker, from the time she was a third grader until he died six months ago, and is good at breaking alibis too. She finds it tedious to repair clocks in the cramped clock shop. She has obeyed her grandfather’s words not to break alibis which could incur someone’s hatred until she gets married and has a person to protect her. However, after she mistakenly let out an empty room to Saji Yoshiyuki, she starts charging 5,000 yen each time to break alibis. She very easily does so in difficult cases that confound the detectives.

Yasuda Ken as Saji Yoshiyuki
The director of Nano Prefectural Police’s Criminal Investigations Department. A career police officer with the Tokyo Metropolitan Police, he had been on fast track but was demoted to Nano Prefectural Police Headquarters after having the tables turned on him in his attempt to expose the corruption of an opposing faction. He leaves his wife and son who express reservations about living in the countryside and goes alone for his new post. He ends up living at Mitani Tokino’s house because she misread his name as “Miyuki” and thought he was a woman. He is very proud despite his lack of field experience and gets the police officers around him annoyed. While pushing on alone in an investigation, he hears the legend of Tokino’s grandfather who was called a master alibi breaker. He also learns that Tokino is able to break alibis too and reluctantly asks her for help but keeps it secret from the other detectives.

Narita Ryo as Tokai Yuma
A detective who only looks cool because of his stylish suits. He belongs to the First Investigative Division at Nano Prefectural Police’s Criminal Investigations Department. Although he is not a career police officer, his colleagues and bosses constantly ingratiate themselves with him because his father is an influential locally elected Diet lawmaker. He seems popular and is often seen on dates with various women but Mitani Tokino is his love interest. He shows up at the shop but is snubbed and plays into her hands. His objective is to maintain public order in the prefecture and to keep Yukino happy since he will succeed his father one of these days. But he has to admit he feels that he is going nowhere. He has an instinctive aversion and resistance to Saji Yoshiyuki who comes all of a sudden even though it is not the period for personnel changes and issues instructions in a patronising way. After he pinpoints the reason for his demotion, he treats him with contempt. He has doubts about Saji’s ability to crack alibis.

Katsumura Masanobu as Makimura Takumi
A section head with the First Investigative Division of Nano Prefectural Police’s Criminal Investigations Department. He overly ingratiates himself with Tokai Yuma, whose father is a Diet lawmaker, calls him “Junior” even though he is his subordinate. He blatantly sucks up to Yuma such as praising his deductions to the skies. There was once in the past that he asked Mitani Tokino’s grandfather Tokio to break an alibi but he does not realise that Tokino has taken over.

Nakamaru Shinsho as Watanuki Tetsuji
The chief of Nano Prefectural Police. Although he heads the prefectural police, he is deferential to Tokai Yuma and constantly flatters him. He is a regular customer who not only requests Mitani Tokino to maintain a wall clock that her grandfather Mitani Tokio had gifted to the prefectural police but also clean his wrist watches on site.

Morimoto Leo as Mitani Tokio
Mitani Tokino’s grandfather who left this world six months earlier. The former owner of Mitani Clock Shop. He took custody of Tokino after her parents died in an accident and the two of them lived together for a long time. While he was alive, he was an expert at breaking alibis. He drilled Tokino hard in the techniques and knowledge of breaking alibis from a young age.

This blog contains information and musings on current and upcoming Japanese dramas but is not intended to be comprehensive.
View all posts by jadefrost →
This entry was posted in TV Asahi, Winter 2020 Dramas and tagged Alibi Kuzushi Uketamawarimasu, Hamabe Minami, Katsumura Masanobu, Narita Ryo, Yasuda Ken. Bookmark the permalink.