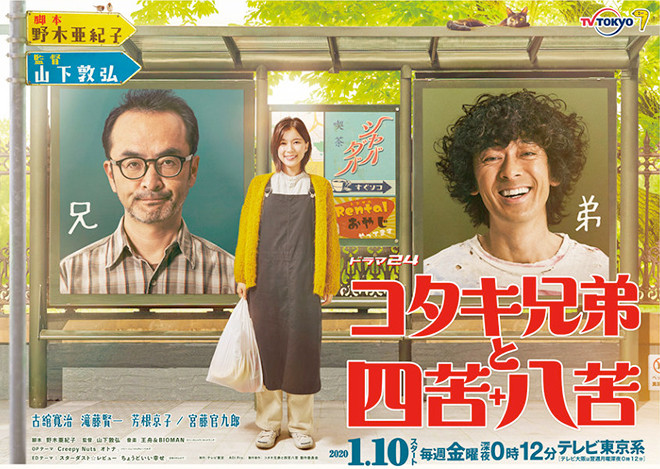 Story
Big brother Kotaki Ichiro used to be an English teacher at a cram school but is currently unemployed and living modestly. His only joy is going to the coffee shop Shabadaba in the neighbourhood. He always tries to chat up Sacchan, the cute part-timer at the shop, but his attempts never go well and end up in vain. One day, Ichiro’s younger brother Jiro suddenly moves into his house. This is the first time in eight years that the brothers are meeting ever since Ichiro announced that he was disowning Jiro. Ichiro wonders about the sudden visit. When he learns about an accident that happen just before Jiro came, he heads to the scene in a panic and encounters the victim, who is a man called Murata. The two brothers are asked by Murata to act as “middle-aged men for rent” and go to a meeting place in his stead. They see a beautiful woman waiting at the meeting place and are at a loss for words … … Through their roles as “middle-aged men for rent”, they get involved with lonely clients and somehow carry on living despite floundering at various unreasonable requests ranging from concern about a husband’s strange behaviour after retirement, fear that a friend will die alone to the world ending in three months.

Characters
Furutachi Kanji as Kotaki Ichiro
An overly serious man who is not living very well. He used to be an English teacher at a cram school but is unemployed now and living modestly. He enjoys going to the coffee shop Shabadaba and tries to chat up Sacchan, the cute part-timer at the shop.

Takito Kenichi as Kotaki Jiro
Kotaki Ichiro’s young brother. His happy-go-lucky personality is the total opposite of his overly serious older brother possibly because he watched him as he grew up. Although he was disowned by Ichiro eight years ago, he suddenly moves into his house. The two of them become “middle-aged men for rent” in an unexpected turn of events.

Yoshine Kyoko as Sacchan
A part-timer and poster girl of the coffee shop Shabadaba where Kotaki Ichiro is a regular. She initially treats the Kotaki brothers as customers, but gradually gets deeply involved with them.

This blog contains information and musings on current and upcoming Japanese dramas but is not intended to be comprehensive.
View all posts by jadefrost →
This entry was posted in TV Tokyo, Winter 2020 Dramas and tagged Kotaki Kyoudai to Shikuhakku, Takito Kenichi. Bookmark the permalink.