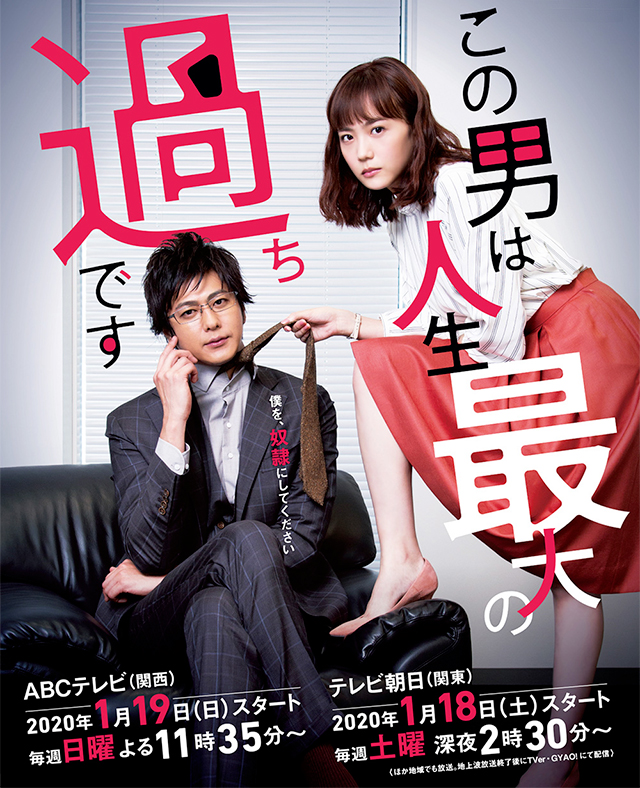 Story
Sato Yui, a temporary employee at Amagi Pharmaceutical, is at a bar drinking alcohol as she grieves over her pet dog that died. “Invent medicine that can bring it back to life!” she cries and blathers drunkenly. A man’s voice calls out, “The dead cannot be resurrected.” He says he will teach her which drug she can overdose on and meet her dog right away and then mercilessly continues, “Do this pointless howling at home.” Yui retaliates by hooking his leg to trip him. She says over her shoulder that she did it on purpose and leaves the place. She does not even realise that this man is Amagi Kyoichi, the CEO of her company. The next day, Yui is summoned to the CEO’s office and presents herself with the expectation that she will get fired. However, Amagi kneels down and tells her, “Please make me your slave.” He does her bidding and keeps out of her way. Several days later, Yui has her first birthday without her beloved dog. She is stricken with loneliness and has difficulty falling asleep when the wind battering her window gets her worried. She looks outside and sees Amagi standing there with a bouquet of flowers in the wind and rain but feigns ignorance … … On another day, Yui is invited by Ishikawa Asami, a senior at her workplace, on a group date. The guys they meet are from a rival pharmaceutical company. Yui again notices Amagi sitting in a corner of the restaurant and her mood turns sour. She gulps down alcohol in an attempt to distract herself but … …

Characters
Hayami Mokomichi as Amagi Kyoichi
The CEO of Amagi Pharmaceutical, a drug company. He is the perfect guy – good-looking, smart and comes from a family with good social standing. He is a brilliant researcher and also a leading businessman. However, he shows his very masochistic side only to Sato Yui whom he is in love with.

Matsui Airi as Sato Yui
A temporary employee at Amagi Pharmaceutical. Because she has a quiet personality in office, it is hard to imagine that she has the makings of an extreme sadist. Her heart is swayed by her CEO Amagi Kyoichi’s offer to be her slave.

Tanaka Michiko as Mishima Sae
Amagi Kyoichi’s ex-classmate. A genius scientist who developed pluripotent cells and has been nominated for a Nobel Prize. She has an innocent personality and makes her feelings for Amagi clear.

Hiraoka Yuta as Aida Koshiro
Amagi Kyoichi’s ex-classmate and friend. He is a doctor with a 100% success rate for surgeries. He has a cool character but is also prone to behaving like a goof at times.

Irie Jingi as Natori Sou
Amagi Kyoichi’s faithful secretary. He is a womaniser.

This blog contains information and musings on current and upcoming Japanese dramas but is not intended to be comprehensive.
View all posts by jadefrost →
This entry was posted in TV Asahi, Winter 2020 Dramas and tagged Hayami Mokomichi, Kono Otoko wa Jinsei Saidai no Ayamachi. Bookmark the permalink.