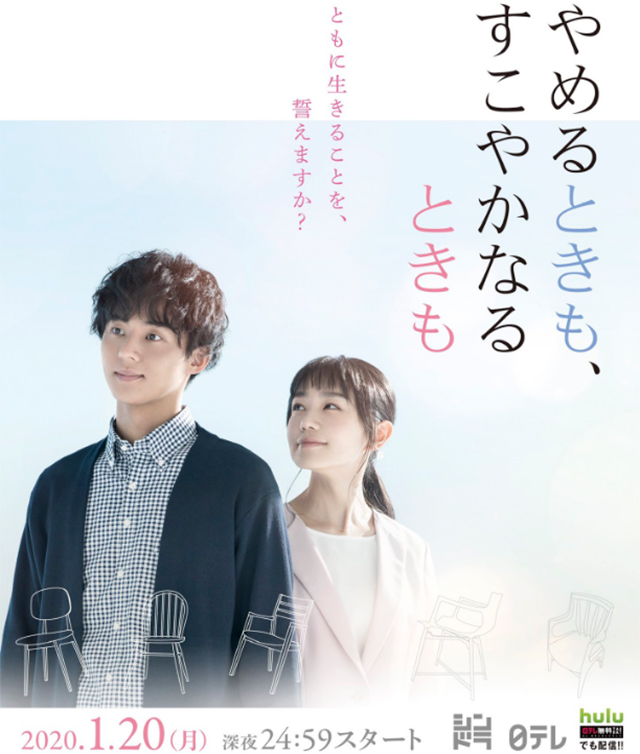 Story
Sudo Issei is a furniture maker. Although he works earnestly, he has not been able to produce a new piece that surpasses his teacher and has made little progress as a craftsman. Motohashi Sakurako works for an advertising production company. She is able to support herself with her job but has been less than successful in love. One day, Sakurako attends a wedding party for a colleague who is a junior at work. Seeing the happy bride in front of her, she hisses that she wants sneak out of this place. Sakurako is told off by her colleague and good friend Mizusawa Ayame and sent to the terrace to cool her head. She encounters Issei who has his eyes closed and a wine bottle beside him. Sakurako is captivated by his handsome sleeping face but is thrown off guard when he makes eye contact and tells her, “Why don’t the two of us get out of this place? When Sakurako wakes up, she is in her lingerie and lying on a bed in an unfamiliar room. She is disappointed that nothing happened even though they spent the night in the same bed. Several days later, Sakurako visits a furniture studio for a business meeting and sees the man whom she spent the night with there. However, Issei does not remember her at all. And he loses his voice all of a sudden. Issei is unable to forget the death of a loved one. Whenever December comes around, he would lose his ability to speak for almost a week – a symptom in reaction to the memorial day. On the other hand, Sakurako has had to support her family ever since her father’s company went bankrupt, and struggles to be freed from this reality quickly. She believes the present can be changed if she gets married. Issei and Sakurako are drawn to each other and seem to connect. But they still keep their emotional scars secret. They do not have innocent feelings for each other and the love that they begin is for their own sakes but … …

Characters
Fujigaya Taisuke as Sudo Issei
A furniture craftsman who runs a small studio by himself. He learned to make furniture from his teacher Sato Tetsu and creates each piece with great care according to his clients’ requests. However, he has made little progress in producing a new piece that surpasses his teacher. He has a gentle and kind personality but does not open his heart to other people. He has a psychological condition where he loses his voice because of an incident in the past. During that period every year, he would end up spending the night with a random woman due to a desperate sense of loneliness.

Nao as Motohashi Sakurako
She works for a small advertising production company. After her father’s company went bankrupt when she was a high school student, he would behave violently every now and then. She went to university with a scholarship and has been supporting the family on his behalf ever since she got a job. She has no time for romance much less experience with men because she has to earn money and feels small as she is still a virgin. She lives earnestly each day, but has little self-worth and confidence. She hates her father who drinks heavily. She is irritated with her mother who says nothing to her father and feels inferior to her younger sister Momoko who got married first and moved out of the house. She thinks she can change her current life and self if she gets married.

Toyama Toshiya as Motohashi Katsuki
Motohashi Sakurako’s father. He used to be adored by employees as the second-generation CEO of a printing company. But he has been indulging in alcohol after the company went bankrupt, and would occasionally act violently. He now drifts between security and cleaning jobs.

Tezuka Satomi as Motohashi Yukie
Motohashi Sakurako’s mother. She was a full-time housewife but spends all her time doing part-time jobs ever since her husband’s company went bankrupt and pays off the debts together with Sakurako. She wishes for her eldest daughter to be happy but she has given up on changing the current situation and simply goes with the flow every day.

Hino Shohei as Sato Tetsu
A talented furniture craftsman and Sudo Issei’s teacher. He was willing to hire Issei as long as he could move his hands despite Issei’s condition that makes him lose his ability to speak. Two years ago, he handed over his studio to Issei and retired but helps out during the period when Issei has no voice. He does not want Issei to become a lonely old man like him.

This blog contains information and musings on current and upcoming Japanese dramas but is not intended to be comprehensive.
View all posts by jadefrost →
This entry was posted in NTV, Winter 2020 Dramas and tagged Yameru Toki mo Sukoyaka Naru Toki mo. Bookmark the permalink.