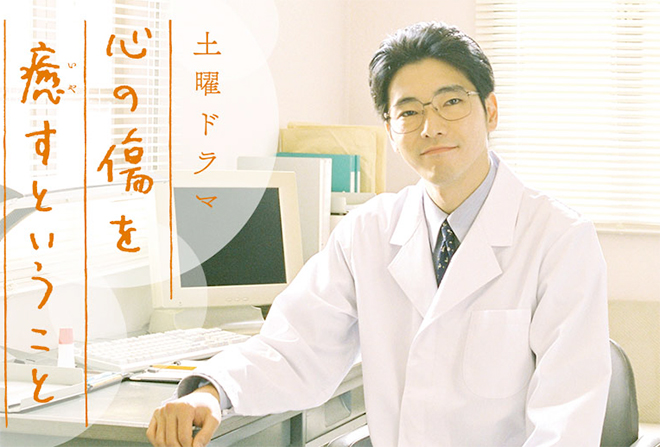 Story
An Kazutaka has a love for the jazz piano and books. He goes on to study at the faculty of medicine in the same university as his good friend Yuasa Koji and aspires to pursue a career in psychiatry under the influence of Professor Nagano Yoshio who is a psychiatrist. However, his father is strongly against his choice. Kazutaka has been questioning who he really is ever since he learned as a child that his parents were of South Korean descent. But one day, he meets the cheerful Shuko at the movies. They fall in love. She becomes his wife, and he finally feels at peace with himself. Right after they have their first child, the Great Hanshin Earthquake strikes the city of Kobe where they live. Kazutaka immediately heads to the hospital where he works after the earthquake. The scene that he witnesses is that of a battlefield hospital. Keenly aware that he is powerless to do anything as he goes around to the evacuation shelters, Kazutaka begins to search for what he can do as a psychiatrist. Meanwhile, he receives a request from an old acquaintance who is a journalist for someone within the earthquake zone to write a regular column. As Kazutaka listens to the stories of disaster victims, he realises that he can help not by treating them, but restoring their capacity to heal. Later on, he compiles his observations of the disaster-hit area as a psychiatrist into a book, and wins a prize for social sciences. He sees this as a positive sign. However, one day when he is 39, he discovers that he has cancer.

Characters
Emoto Tasuku as An Kazutaka
A young, bashful psychiatrist whose jazz piano skills are as good as a pro. He also has a love for records and books. He is working at Kobe University Medical Hospital’s Psychiatry Department when the Great Hanshin Earthquake strikes.

Ono Machiko as An Shuko
An Kazutaka’s wife. She loves movies. She meets Kazutaka by chance and they fall in love. She continues to support him with characteristic cheerfulness.

Hamada Gaku as Yuasa Koji
An Kazutaka’s only good friend who has been together with him since youth. He also goes on to become a psychiatrist just like Kazutaka, and they form a jazz band together where he plays the saxophone.

Ishibashi Ryo as An Tetsuyoshi
An Kazutaka’s father. A South Korean living in Osaka. He is a shrewd entrepreneur. Although he pins his hopes on his three sons’ future, he opposes Kazutaka’s decision to become a psychiatrist.

Kondo Masaomi as Nagano Yoshio
An authority on psychiatry who represents Japan. He is also an admired mentor who spurs An Kazutaka to decide on a career in psychiatry.

This blog contains information and musings on current and upcoming Japanese dramas but is not intended to be comprehensive.
View all posts by jadefrost →
This entry was posted in NHK, Winter 2020 Dramas and tagged Emoto Tasuku, Hamada Gaku, Ishibashi Ryo, Kokoro no Kizu o Iyasu to iu Koto, Ono Machiko. Bookmark the permalink.

2 Responses to Kokoro no Kizu o Iyasu to iu Koto