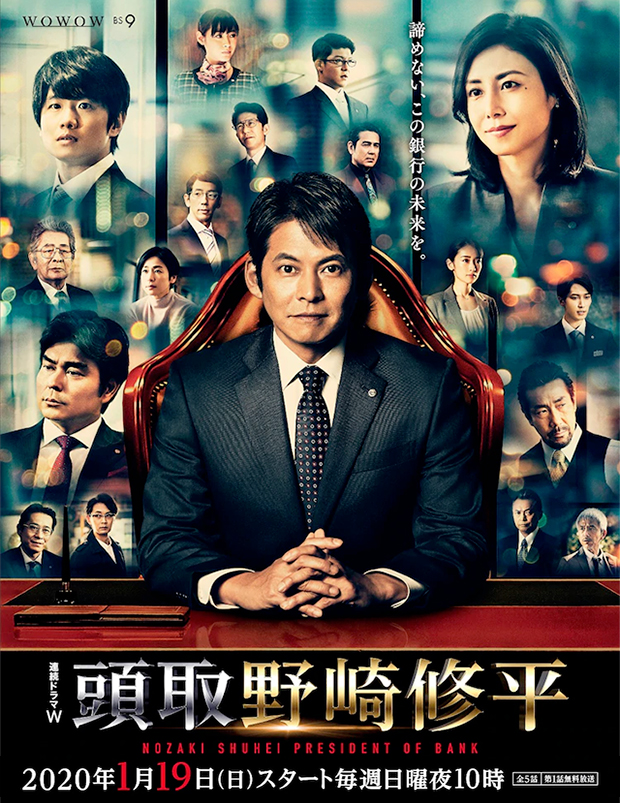 Story
Three years after Ozora Bank was nationalised, there are still no signs of a turnaround. Nozaki Shuhei, who previously exposed the bank’s illegal dealings as an internal auditor, becomes its president in an unconventional promotion. During this time, he had been involved in many corporate restructuring efforts through the Industrial Revitalization Corporation of Japan and was appointed because of his resourcefulness. In a bid to restore the confidence and pride of the bank employees who have been demoralised by the performance-driven culture and layoffs, Nozaki sets his sights on building a bank that can contribute to society and launches reforms with managing director Tachikawa Shoko and Ishihara Toshiyuki from the loan department. Then Kyogoku Haruki, a former elite government bureaucrat and the son of the former bank president, becomes a director. Announcing that he will avenge his father, he plots with Shoko to oust Nozaki and take back the position his father had built up. Will Nozaki be able to stay true to his own sense of justice and revive the bank? His battle begins again … …

Characters
Oda Yuji as Nozaki Shuhei
A man who has a strong sense of justice, empathy and makes level-headed decisions. He exposed Ozora Bank’s illegal dealings with impartiality as an internal auditor and aimed to rebuild it. However, he resigned when it was nationalised. After that, he worked for the Industrial Revitalization Corporation of Japan and was involved in many corporate restructuring efforts. He is selected to be Ozora Bank’s president again due to his resourcefulness, and is determined to rebuild the ruined bank.

Matsushima Nanako as Tachikawa Shoko
A very ambitious woman who was selected to be a managing director as a symbol of Ozora Bank’s revival. She supported the bank after Nozaki Shuhei’s departure. When Kyogoku Haruki, the son of the former bank president Kyogoku Masahiko, becomes a director, her assistance is sought to bring about Nozaki’s downfall but … …

Ozawa Yukiyoshi as Kyogoku Haruki
The son of Kyogoku Masahiko, Ozora Bank’s former president. He used to be an elite government bureaucrat at the Ministry of Finance’s Budget Bureau but he switched to work for an American bank. He later becomes a director of Ozora Bank as he wished. Together with Tachikawa Shoko, he comes into conflict Nozaki Shuhei in order to take back his father’s position.

Kazama Shunsuke as Ishihara Toshiyuki
A bank employee who is hostile to Nozaki Shuhei. Although he is skeptical of Nozaki’s policies after he returns to Ozora Bank as its president, his mindset changes while he carries out the mission entrusted to him. He begins to have faith in Nozaki and soon plays a part in rebuilding the bank.

Kishitani Goro as Takeda Shingo
The shrew and capable CEO of IRM, a corporate risk management company that he founded. He used to be Ozora Bank’s hawkish executive director. He protects Nozaki Shuhei who is being intimidated once again by Kaito Yoshimi, an extortionist that threatens to disrupt shareholder meetings, while rebuilding the bank.

This blog contains information and musings on current and upcoming Japanese dramas but is not intended to be comprehensive.
View all posts by jadefrost →
This entry was posted in Winter 2020 Dramas, WOWOW and tagged Maekawa Yoichi, Matsushima Nanako, Nozaki Shuhei Series, Oda Yuji, Ozawa Yukiyoshi. Bookmark the permalink.