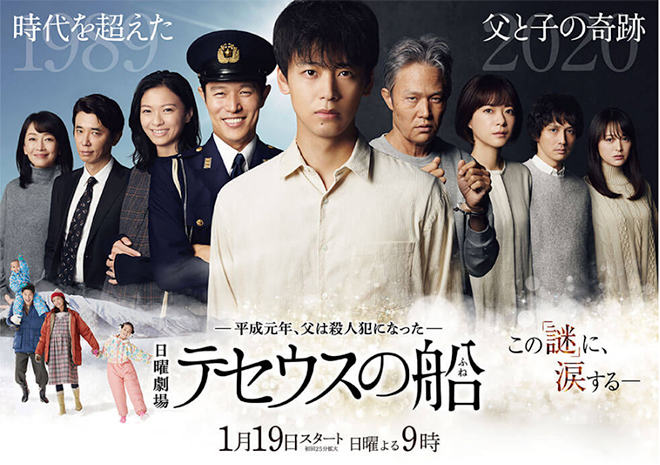 Story
Tamura Shin is a young man who has been pursuing the mystery of the murder that his father Sano Bungo, a police officer, caused and changed the fate of their family. Ever since his father’s arrest, Shin, his mother Kazuko and sister Suzu have been getting harsh looks and had to live in hiding – a life where they are always conscious of people and not even permitted to smile. However, Shin’s beloved wife Yuki accepts his past and has always given him encouragement and support. One day, Shin is told by Yuki to try and give his father the benefit of the doubt, and he decides to meet his father who is in prison. However, when he heads to the old crime scene, he is shrouded by a sudden mist and ends up going back in time to the past. Shin finds himself in the year 1989 – right before the murder took place. The crime scene has become a snowy village. At this village, Shin meets his father for the first time in his life as well as his much younger mother. They are a lovely, kind family with warm smiles. Why did his father become a murderer? If he stops his father’s case, he will not lose them. This spurs Shin to challenge the taboo of changing the past. He tries to unravel the mystery here and prevent the murder.

Characters
Takuechi Ryoma as Tamura Shin
31 years ago, his father Bungo was arrested for causing a series of murders by poisoning. Because of the father whose face he had never even seen, he has always been conscious of what other people think of him. After he travels back in time to the start of the Heisei era right before the case took place, he decides to try changing the past in order to bring back the smiles to his lost family.

Ueno Juri as Tamura Yuki
Tamura Shin’s wife. She married Shin against the wishes of her family despite knowing that his father is a murderer. She is pregnant now. She pushes him to confront the case.

Suzuki Ryohei as Sano Bungo
Tamura Shin’s father. 31 years ago, he was arrested for causing a series of murders by poisoning and sentenced to death. He used to work as a police officer in the village where he was stationed at. A cheerful, hearty man who is loved by his family and the villagers.

Eikura Nana as Sano Kazuko
Tamura Shin’s mother. A cheerful but plucky woman who makes an impression. She watched over her family with great love and gave them pep talks at times.

This blog contains information and musings on current and upcoming Japanese dramas but is not intended to be comprehensive.
View all posts by jadefrost →
This entry was posted in TBS/MBS, Winter 2020 Dramas and tagged Ando Masanobu, Aso Yumi, Eikura Nana, Kanjiya Shihori, Santamaria Yusuke, Suzuki Ryohei, Theseus no Fune, Ueno Juri. Bookmark the permalink.