Keiji to Kenji ~ Shokatsu to Chiken no 24-ji 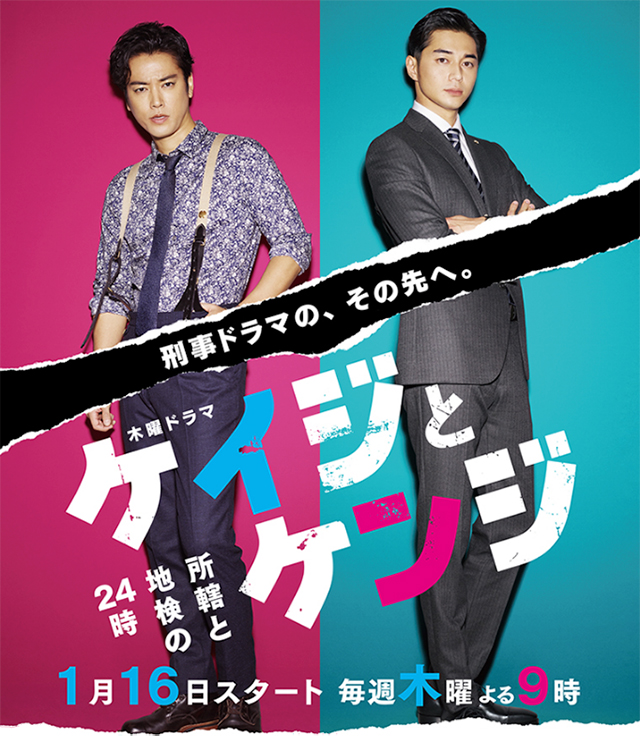 Story
Nakaido Gota has been working at a police box in Yokohama since switching careers from a physical education teacher to a police officer. One day, he arrests a thug on the spot for brandishing a knife at a shopping street. He is commended by the chief of the Kanagawa Prefectural Police which encourages him to make a direct appeal to the police chief. Gota gets transferred to the Investigation Division of Yokohama Sakuragi Police Precinct and makes a new start as a detective. He is unstoppable from his first day. After Gota is told about the people’s candid opinions to quickly arrest the serial burglar who has stoke public fears since the year before last, he announces that he will arrest the culprit even though this falls beyond the jurisdiction of his section. Gota begins a low-profile investigation but eventually catches the burglar. When he sees the person’s face, he is shocked. The serial burglar is his former student Namerikawa Hideyuki. Meanwhile, Mashima Shuhei, a prosecutor with the Yokohama District Prosecutors’ Office’s Minato Branch, is feeling increasingly impatient because he has not been put in charge of any big cases even though he has been a prosecutor for five years. Then, Shuhei is put in charge of Namerikawa who has been sent to the prosecutors’ office. When he questions Namerikawa about other charges, it turns out that Namerikawa bumped into an elderly person when he broke into a home one year ago, shoved the person aside and fled. Because of his ambition, Shuhei checks with Sakuragi Police Precinct to find out whether this elderly person was found dead right after that. Gota is the hot-blooded guy who goes to great pains to arrest criminals and enjoys appreciation by the victims. He has little concept of compliance at a time when it is considered important. On the other hand, Mashima is the coldhearted one who believes the best social justice is to prosecute criminals. Therefore, detectives who gather evidence are the “pawns” of prosecutors. Brimming with their own sense of justice, the two men team up to tackle numerous cases. Detectives often get no justice. Despite risking their lives to arrest suspects, 70% of the cases get dropped. All prosecutors will fight for convictions because the conviction rate for criminal cases is more than 99%. Gota and Shuhei naturally clash but begin to empathise with each other.

Characters
Kiritani Kenta as Nakaido Gota
A detective with the Investigation Division of the Kanagawa Prefectural Police’s Yokohama Sakuragi Police Precinct. Born in Osaka, he worked as a physical education teacher at a private high school for eight years before switching to become a police officer. He was promoted from a policeman at a police box at the age of 36 and fulfilled his dream of becoming a detective. He is a compassionate man who will not stop once he breaks into a run. He likes to act cool by nature but in very high spirits now that he is a detective. He loves the appreciation from victims after the bad criminals are arrested. Although he has confidence in his physical strength and reflexes, he does not like studying and has little concept of compliance at a time when it is considered important. The way he thinks of justice is very much like the common people and he often raises objections to the police organisation’s contradictions. A greenhorn as a detective and person working in an organisation, he also gets annoyed with condescending attitude of the prosecutor Mashima Shuhei, whom his younger sister Minami supports as an assistant officer.

Higashide Masahiro as Mashima Shuhei
A prosecutor with the Yokohama District Prosecutors’ Office’s Minato Branch. He graduated from Tokyo University’s postgraduate law faculty and passed the bar exam. He strongly feels that he is one of the chosen people and very proud too. While he is exceptionally intelligent, he is lacking in other areas and still half-baked as a prosecutor. He has had this job for five years but he has not been put in charge of a big case yet and this make him feel impatient deep down. He believes the best social justice is to prosecute criminals and the detectives who gather evidence for this purpose are the “pawns” of prosecutors. Therefore, he makes a detective who has been lax in gathering evidence, do it again thoroughly and at the trial, he will decisively drive suspects into a corner. However, his involvement with Nakaido Gota, the older brother of the assistant officer whom he likes, gets involved, steadily throws him off his stride.

Higa Manami as Nakaido Minami
Nakaido Gota’s younger sister. An assistant officer who supports the prosecutor Mashima Shuhei at the Yokohama District Prosecutors’ Office’s Minato Branch. She has an accurate grasp of the feelings and viewpoints of the people involved in cases and is a strong-minded woman who expresses her opinions as equals with Shuhei sometimes. She thinks he is an excellent prosecutor. But she smiles wryly at his inflexibility and attempts at acting cool. She is caught between her brother Gota and boss Shuhei who are total opposites and can never catch a break. She has just broken up with her boyfriend and is single. Even though she knows that Shuhei likes her, she has never seen him as a man. She is annoyed by her brother’s inconsiderate behaviour when he comes to live with her.

Shibuya Kento as Kusaka Naoki
A prosecutor with the Yokohama District Prosecutors’ Office’s Minato Branch. He passed the bar exam while he was studying at Tokyo University. Like Mashima Shuhei, he looks down on the police but flatters himself that he is outstanding. He openly shows rivalry with Shuhei. He is always scared of the assessment of Kashimura Takeo, the chief of the Minato branch.

Yashiba Toshihiro as Tago Eikichi
The head of the Investigation Division of the Kanagawa Prefectural Police’s Yokohama Sakuragi Police Precinct. He is constantly worried about thorough compliance as a middle manager. Because he is particularly concerned about prosecutors, he always feels nervous that Nakaido Gota may act rashly.

Yanagiba Toshiro as Kashimura Takeo
The head of the Yokohama District Prosecutors’ Office’s Minato Branch. Mashima Shuhei’s boss who used to be called the devil prosecutor at the Tokyo District Prosecutors’ Office. He looks fierce and is severe. He has been slow to put the inexperienced Shuhei in charge of serious crimes. He believes charm is absolutely essential because a prosecutor’s job is to make suspects open up. Although he thinks that Shuhei is still inexperienced, he secretly thinks he has potential. He and Onuki Seiichiro, the chief of Sakuragi Police Precinct, are old acquaintances and they probe each other while playing shogi.

Kazama Morio as Onuki Seiichiro
The chief of Kanagawa Prefectural Police’s Yokohama Sakuragi Police Precinct. He understands Nakaido Gota. He believes the police precinct needs a passionate detective like Gota and keeps an eye on the areas that he is still not experienced in. He looks mild-mannered but he makes meaningful remarks he makes from time to time also helps Gota and the others at the police precinct. Although he has stood up to the prosecutor Kashimura Takeo, he believes his position that the police does work that is unique to the police, is the same with prosecutors.

This blog contains information and musings on current and upcoming Japanese dramas but is not intended to be comprehensive.
View all posts by jadefrost →
This entry was posted in TV Asahi, Winter 2020 Dramas and tagged Higa Manami, Higashide Masahiro, Imada Mio, Keiji to Kenji, Kiritani Kenta, Yanagiba Toshiro. Bookmark the permalink.