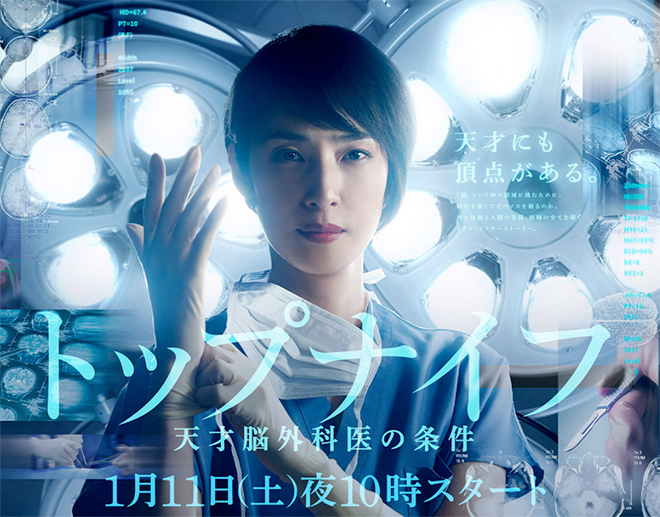 Story
The renowned neurosurgeon Miyama Yoko is the “empress” at Tohto General Hospital. She has been pushed into supervising three new doctors by Imadegawa Takao, the head of the neurosurgery department, and this has been stressing her out. The hospital’s neurosurgery department brings together surgical geniuses who are a select group among surgeons. These top doctors are constantly expected to be perfect and have to deal with the pressure that the slightest mistake could mean the difference between a patient’s life or death. The ones that will be reporting to her are Kuroiwa Kengo, a doctor with worldwide fame who is also a notorious womanizer; Nishigori Takuma, a genius who can handle both surgery and catheter and prefers doing operations over eating; and Kozukue Sachiko, a confident specialist doctor in training who graduated at the top of her class in medical school but does not realise her performance on the job is below satisfactory. One day, not long after starting her new job, Sachiko is put in charge of an emergency case. However, she freezes but Yoko shows up to save the patient with unerring judgment and brilliant skill. Yoko quickly gets irritated with Sachiko whom she finds useless. Meanwhile, the nurses are gossiping about a possible clash between the “empress” and Kuroiwa and Nishigoro who are both top surgeons. Even though they have the best skills, there is something awkward and irregular about these doctors. What did they sacrifice to learn how to save people?

Characters
Amami Yuki as Miyama Yoko
A specialist in brain aneurysms at Tohto General Hospital’s Neurosurgery Department. She has been told by Imadegawa Takao, the head of the department, to take a supervisory role and bring the department together. She believes that as a neurosurgeon, she can change a patient’s life through her ability. She is aware of the responsibility and importance of this, and puts her patients’ lives above all else but feels guilty for abandoning her family.

Shiina Kippei as Kuroiwa Kengo
A specialist in brain tumours at Tohto General Hospital’s Neurosurgery Department. A top neurosurgeon who is frequently covered in the media. He puts himself first. Because he has saved the lives of all sorts of people through his work, he believes he deserves priority for everything else.

Hirose Alice as Kozukue Sachiko
A specialist doctor in training at Tohto General Hospital’s Neurosurgery Department. Touted to as a prodigy since young, she has lived the life of one who would be top among the top, taking it for granted that she would be the best in everything. She became a doctor because she scored high and medicine was the hardest. When she joins the hospital, it is gossiped that she is a newbie with utterly hopeless practical skills. But she is oblivious to this. She also has not experienced any romance until she has her first love at the age of 26.

Nagayama Kento as Nishigori Takuma
A genius at Tohto General Hospital’s Neurosurgery Department who can handle both surgery and catheter. Although he has absolute confidence in his surgical skills, he is actually an insecure mess deep down. He is a solitary doctor who will neither open up to his colleagues nor patients.

Miura Tomokazu as Imadegawa Takao
The head of at Tohto General Hospital’s Neurosurgery Department. He is an ordinary doctor but he is good at placing the right people in the right jobs. He is careful of the people around him and often gets talkative when he tries to break the tension. However, there are times when he ends up hurting people by saying what they least want to hear because of his perceptiveness. In fact, he has a secret for bring these talented doctors together at the neurosurgery department … …

This blog contains information and musings on current and upcoming Japanese dramas but is not intended to be comprehensive.
View all posts by jadefrost →
This entry was posted in NTV, Winter 2020 Dramas and tagged Amami Yuki, Hirose Alice, Miura Tomokazu, Nagayama Kento, Shiina Kippei, Top Knife. Bookmark the permalink.