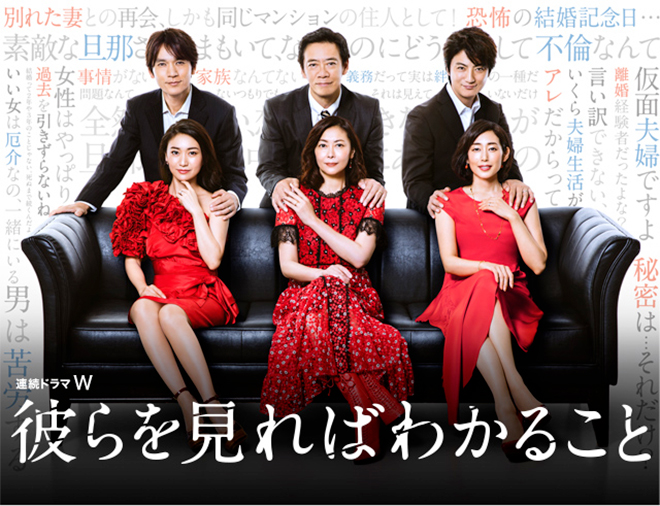 Story
Uchida Momoko, a manga artist popular for her sensual work, lives on the top floor of a swanky apartment building in Futako Tamagawa. She has a new husband Kaito and a son Shuji who is a university student. Tomizawa Mizuki and her husband Ichita are a family of five in the same apartment building. Momoko and Mizuki, who is a career woman, are of the same age and have become friends. They catch up with each other and relieve stress at their regular dining bar. One day, a newly married couple moves into one of the apartments. The man is Kamoi Yosuke, the ex-husband that Momoko divorced 20 years ago and his new wife is Rumi. It is rare for a former husband and wife to remarry and become neighbours. Furthermore, the arrival of this new couple brings a “secret” that Momoko and Mizuki have into the open. The relationships between these three wives and three families begin to take the shape of more than mere neighbours … …

Characters
Nakayama Miho as Uchida Momoko
A popular manga artist whose work has been serialised in a monthly magazine. At home, she strives to do her duty as a wife and mother.

Kimura Tae as Tomizawa Mizuki
A career woman who is the head of the damage insurance division at a leading insurance company. She lives with her husband, their two children and her mother. She behaves like the man of the house at home and no longer feels attracted to her husband Ichita.

Oshima Yuko as Kamoi Rumi
A nurse. She has a carefree personality but cannot hide her agitation at living in the same apartment building as her husband Yosuke’s ex-wife.

Kamiji Yusuke as Tomizawa Ichita
Tomizawa Mizuki’s husband who is three years her junior. A former professional boxer who is a house husband now. He loves cooking so much that he posts on recipe sites. Although he is a devoted husband who loves his wife even after more than 20 years of marriage, he is troubled that they have not been having sex.

Nagano Hiroshi as Kamoi Yosuke
Uchida Momoko’s ex-husband. He used to work for a securities firm but left his job. He is now a care worker at a day-care facility at the recommendation of Rumi whom he met later. Although his life with Rumi as newly weds is going well, they unexpectedly come to live in the same apartment building as Momoko. He is uncomfortable with his current wife and ex-wife seeing each other on a fairly regular basis.

Namase Katsuhisa as Uchida Kaito
Uchida Momoko’s husband. He owns a company that has grown rapidly in the F&B industry. He plays the good husband and father at home but there are constant rumours in the company about his relationships with women.

This blog contains information and musings on current and upcoming Japanese dramas but is not intended to be comprehensive.
View all posts by jadefrost →
This entry was posted in Winter 2020 Dramas, WOWOW and tagged Karera o Mireba Wakaru Koto, Kimura Tae, Nakayama Miho, Namase Katsuhisa. Bookmark the permalink.