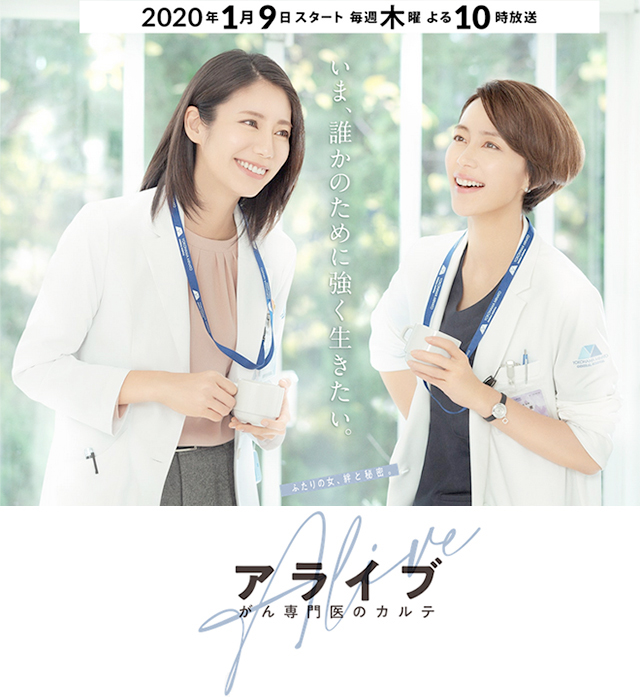 Story
Onda Kokoro is an oncologist who works for Yokohama Minato General Hospital. She is busy every day with cancer patients. Called Dr Onkoro for short by the people around her, she has been teased that she was born for this path. She got married to Takumi, whom she had known since she was a student, and they had a son. Life was going smoothly for her. But three months ago, her husband fell in an accident and remained unconsciousness even though he underwent emergency surgery. Although Kokoro puts on a brave face at work, she still has not been able to accept reality. On this day, Kokoro informs Kosaka Tamiyo, a patient that she is in charge of, that her cancer has relapsed. But Tamiyo merely cracks a joke and leaves. Kokoro has barely any time for a breather before she is notified about an emergency at the chemotherapy room. She rushes over with Yuki Ryo, a resident on his first day at the oncology department. A first-time male patient has collapsed. Even though he recovers after they treat him, Kokoro feels something is wrong when she takes a look at the patient’s medical records accompanied by a referral letter. She tries to recommend a biopsy to the head of the gastroenterology department who is the doctor in charge. However, she is told not to examine someone else’s patient without permission. After Kokoro finishes work, she heads to another hospital to visit her husband. Then she goes to pick up their son Ren. When they get home, her father-in-law Kyotaro greets them although she did not know that he was going to come over. Kokoro has had no breathing space at work or at home and this has been her routine lately. Several days later, Kokoro orders tests for that male patient and the results confirm what she had expected. She tries to confirm this with the doctor in charge but is told not to run a check as she likes. Kokoro is about to protest when a female doctor whom she has never seen before, steps forward to say she was the one who did it. This woman is Kajiyama Kaoru, a gastroenterologist who has transferred to work at the hospital. Kaoru understands the need for oncology as a surgeon and gives emotional support with her sunny personality as a colleague. She becomes a dear friend whom Kokoro feels is a sudden ray of light in her personal and professional life … …

Characters
Matsushita Nao as Onda Kokoro
She aspired to be a doctor because she wanted a career saving people, and went to medical school on a scholarship. After graduation, she first joined the radiology department. But her experience saving a cancer patient through diagnostic imaging made her think of becoming a cancer specialist. She decided to study oncology and transfer to the oncology department. She is one of the few cancer specialists in Japan. While she hates to lose and also has a bold side, she is able to empathise with her patients. She got married to Takumi, whom she had known since she was a student, and they had a son called Ren. Life was going smoothly for her. But three months ago, her husband fell in an accident. He is still in a coma even though he had emergency surgery.

Kimura Yoshino as Kajiyama Kaoru
A competent gastroenterologist. She had a strong will to become a doctor and went to a state-run medical school. She has been a gastroenterologist for 15 years. She has a reputation for her good skills and has performed many surgeries. She is very knowledgeable about cancer as a doctor who excises cancer with effective procedures especially for pancreatic cancer which is known as the silent killer. Although she is always calm and collected, and able to make the right judgment in a split second, she surprises the people around her with her daring personality. She constantly gets into romantic relationships with men who are difficult to deal with. One day, she transfers to the hospital where Onda Kokoro works at. She appreciates Kokoro’s knowledge and position as an oncologist and becomes a buddy who supports Kokoro in surgical care. However, there is a secret that she can never tell Kokoro.

Kiyohara Sho as Yuki Ryo
A second-year doctor in training. After making the rounds of various departments, he is placed in the oncology department for his final term. He has a cool and brusque personality. But he is actually an awkward person with a passion deep down. He is often misunderstood because he speaks his mind. He comes from a family of surgeons and aspires to be a surgeon too. The reason why he chose the oncology department during his residency is because he believes he will treat cancer as a surgeon and has been studying surgery when he has spare time, but … …

Nakamura Shunsuke as Onda Takumi
Onda Kokoro’s husband. They became acquainted while in school and are a love match. A genial and kind man who is a novelist albeit a struggling one. Because of that, Kokoro has to support the family while he does his best with the housework and parenting. One day, he fell in an accident and received emergency surgery but still had not regained consciousness. This completely changes the happy Onda family.

Miura Shohei as Sekikawa Ryuichi
A mysterious young man who is full of charm. He shows up in front of Kajiyama Kaoru one day and tries to get close to her at every opportunity. He seems to have some hidden agenda but no one knows his true intentions.

Tanabe Seiichi as Sudo Susumu
The deputy chief of the gastroenterology department at Kanto Medical University Hospital where Kajiyama Kaoru used to work before she transferred to Yokohama Minato General Hospital. Kaoru’s former boss. An outstanding gastroenterologist who is sharp and also sincere as a doctor. He is the most popular person in the hospital. Even after Kaoru changed hospitals, he offers advice in areas including surgery.

Kitaoji Kinya as Onda Kyotaro
Onda Kokoro’s father-in-law. A veteran scriptwriter who has produced many TV drama hits. He is a mischievous person with a generous heart. His wife passed away when his son Takumi was still a child and he brought him up on his own. That is why he is better at cooking as well as sewing than Kokoro who left the housework to Takumi. He tries to help out while his son is hospitalised and frequently comes to the house to prepare dinner and play with his dear grandson. At the same time, he seems to be realistic about his son’s future.

This blog contains information and musings on current and upcoming Japanese dramas but is not intended to be comprehensive.
View all posts by jadefrost →
This entry was posted in Fuji TV, Winter 2020 Dramas and tagged Alive, Kimura Yoshino, Kinoshita Houka, Kitaoji Kinya, Kiyohara Sho, Matsushita Nao, Takahata Atsuko, Tanabe Seiichi. Bookmark the permalink.