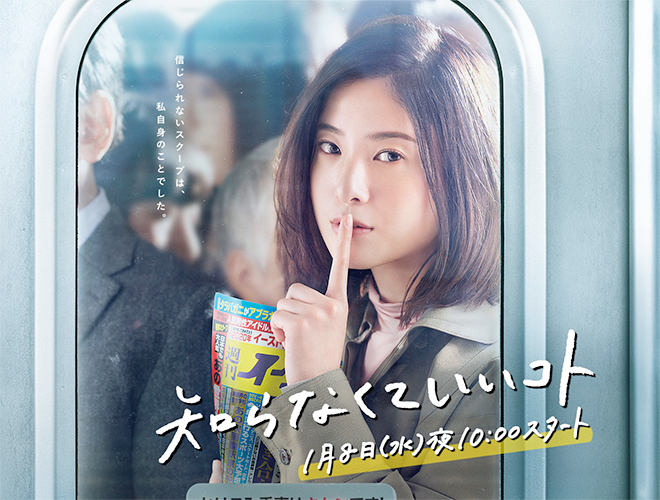 Story
Makabe Kate is a reporter for Shukan East, a weekly magazine which carries scoops from corrupt politicians to celebrity scandals. Her work life and love life are going really well. Then one day, Kate is informed that her mother Anna, who brought her up all on her own, collapsed all of a sudden. Before Anna passes away, her last words are the name of Kate’s father – Keanu Reeves … … Words that would create major turmoil in Kate’s life. How can Kate’s father possibly be a Hollywood star!? She talks this over with her boyfriend Nonaka Haruki and laughs it off. But there is convincing evidence. A photograph from her mother’s study shows Anna in her younger days with Keanu Reeves. Kate returns to work several days later and goes straight to the editor-in-chief Iwatani Susumu about a lead on the scam that she has been pursuing. She participates in tea ceremony classes run by an elderly woman called Taga Emiko in order to interview Emiko who fell in love with a fictitious person online and gave him a lot of money but does not believe she has been cheated. However, Emiko is on her guard and the interview does not go well. Meanwhile, Kate’s ex-boyfriend Odaka Yuichiro visits her home to offer incense to Anna after returning from an overseas business trip. When he hears Anna’s last words and does not reject the theory that Keanu is Kate’s father, it bolsters Kate’s spirits. As Kate digs into the mystery surrounding her own birth and father’s secrets, she stumbles upon a shocking truth that has been concealed and has to face the fact that sometimes it is best not knowing the truth.

Characters
Yoshitaka Yuriko as Makabe Kate
A journalist who belongs to the special features team at the editorial department of Togen Publishing’s weekly magazine Shukan East. She has been with the magazine for 10 years and has contacts in political circles as well as the Tokyo Metropolitan Police Department. A confident young woman with the charm and affability of her mother Anna who was a film critic and leading subtitler. She hopes for a proposal from Nonaka Haruki, a junior at her workplace whom she has been dating for two years.

Emoto Tasuku as Odaka Yuichiro
Makabe Kate’s ex-boyfriend. Although he was a press photographer for Shukan East who was even a candidate for the Pulitzer Prize, something spurred him to switch over to freelance animal photography. He is married with a wife and child.

Shigeoka Daiki as Nonaka Haruki
He belongs to the serialisation team at the editorial department of Togen Publishing’s weekly magazine Shukan East. He is good at gaining the trust of writers. Makabe Kate’s boyfriend. He is agonising over whether it is time to propose to her.

Akiyoshi Kumiko as Makabe Anna
Makabe Kate’s mother. A film critic and leading subtitler. She brought Kate up on her own and before she passed away, she left her daughter with some significant words.

Sasaki Kuranosuke as Iwatani Susumu
The editor-in-chief of Togen Publishing’s weekly magazine Shukan East. He has constantly kept Shukan East in top position for sales among the weekly magazines and been able to create an atmosphere where the editorial department is one in mind and body. He previously scored numerous scoops that will always be remembered and he is like an older brother to Odaka Yuichiro who was a photographer at the time.

Kobayashi Kaoru as Noto Atoru
A mysterious man who will greatly influence the second half of the story. He runs a bicycle repair shop.

This blog contains information and musings on current and upcoming Japanese dramas but is not intended to be comprehensive.
View all posts by jadefrost →
This entry was posted in NTV, Winter 2020 Dramas and tagged Emoto Tasuku, Kobayashi Kaoru, Sasaki Kuranosuke, Shiranakute Ii Koto, Yoshitaka Yuriko. Bookmark the permalink.