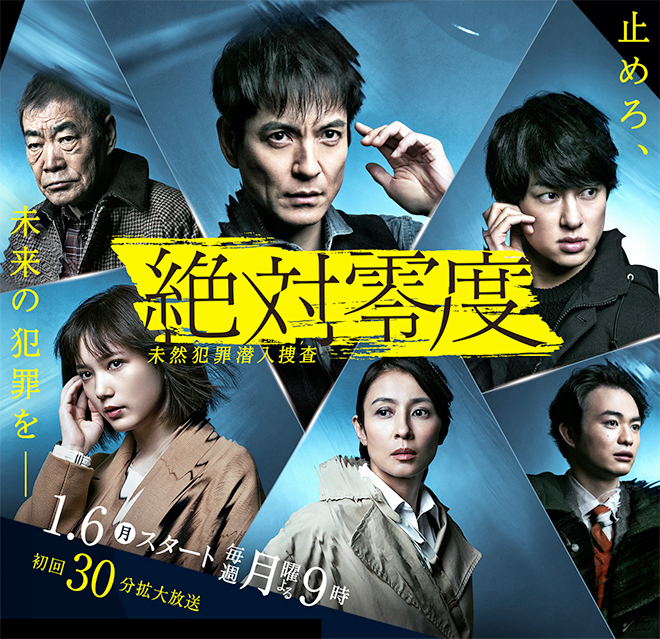 Story
The Mihan aggregates and analyses big data such as the personal information on Japanese citizens – email and phone records, financial institutions’ deposit and withdrawal records – and surveillance camera footage nationwide. It then investigates dangerous people identified by AI as future criminals and sets out to prevent such grave offences, primarily murders before these happen. Izawa Norito is the leader of team. He was a former elite detective of the Public Security Department but his wife and daughter were ruthlessly killed as a result of the false allegations in test case #0 because of the Mihan system. One day several months into the future, a large-scale terror attack is about to take place in Tokyo. Explosives have been placed in multiple places including Shibuya, Shinjuku and Kasumigaseki, triggering the highest alert level. The Prime Minister’s official residence declares a state of emergency. As the Special Assault Team and the bomb disposal unit are mobilised, Odagiri Yui and Yamauchi Toru from the Mihan join the investigation. While searching for the explosives, Yui hears a gunshot and enters a room where she finds Izawa standing in front of a woman who has been shot dead. He is in tears and holding a gun in his hand. Yui is so shocked that she is unable to make a sound. Several months earlier, the Mihan had boarded a cruise ship connecting Tokyo and Hong Kong to deter a battle between drug syndicates. With the support of the legendary hacker Kagami Sosuke, who had joined as a new member, they succeeded in preventing crime. At that time, two Ministry of Justice bureaucrats Kitami Toshiya and Kosaka Akari showed up. Kosaka, who had volunteered to be responsible for the Mihan, declared Izawa a dangerous person in front of everyone and her intention to review personnel but immediately issued investigation instructions. These are the same two people that the Mihan have tracked but found no common ground.

Characters
Sawamura Ikki as Izawa Norito
An assistant inspector who is the leader of the Mihan team of investigators. A former elite detective of the Public Security Department. He is usually gentle-mannered, easygoing and sort of elusive. As his wife and daughter were mercilessly murdered, his desire to prevent crimes before they happen so that there will not be similar victims again, is much stronger than others. His anger at criminals is all too extreme and he constantly has an intense ferocity that crosses the line for a detective. He is considered dangerous by the top brass.

Yokoyama Yu as Yamauchi Toru
He became a member of the Mihan after stints in the First Investigative Division and Special Criminal Investigations Unit. Although he now conducts investigations, his position is to “police the police” according to the new notice of personnel change. He has to check for illegal investigations such as breaking and entering homes and cracking computers. However, this is is the official reason because he has been ordered by the top brass to keep close tabs on Izawa Norito.

Honda Tsubasa as Odagiri Yui
A police officer who used to be with the Community Safety Division but was transferred to the Mihan because she was excessively violent to a suspected molester who tried to run away. Because she was attacked by a man when she was a high school student, she has a fear of men and behaves unusually cold and rough towards them. She dabbled in various martial arts in order to become tough and is relatively strong in her own style of martial arts

Mizuno Miki as Kosaka Akari
A bureaucrat from the Ministry of Justice. The existence of the Mihan within the police is public knowledge. However, citizens have not been informed that they are under surveillance and their personal information is being used without permission for investigations. Although she is from the Ministry of Justice, she cannot have the police enshrine the Mihan system in law and volunteered to take charge of the Mihan but she questions Izawa Norito’s true intentions. She regards him as a dangerous man and there is always a tense atmosphere between the two of them.

Morinaga Yuki as Yoshioka Takumi
A career police officer who was assigned to the Mihan as a new trainee. He is unhappy that an elite person like himself was posted to a unit with a story behind it and he adopts a negative attitude that the illegal investigations will harm his own career advancement. However, he was actually a gifted child actor and displays an odd tenacity only for getting into character during undercover investigations. He would even stick his nose into the acting of each of the other investigators. He frequently gets into arguments with Odagiri Yui who is older than him but lower in rank, and comically scribbles notes on the number of times that he has been drubbed by her.

Emoto Akira as Kagami Sosuke
A legendary genius hacker who is tired of facing computers. He has a natural affinity for new things and had been deeply involved in the world of computers since the early days. He has anecdotes assisting in the arrests of international hackers. Kosaka Akari had hoped he would be a white hacker to put this knowledge and skills to good use for the Mihan’s investigations. But he has lost his passion for computers and is greatly interested in the Mihan’s undercover investigations. He is a free spirit whose assistance in investigations very much depends on his mood.

This blog contains information and musings on current and upcoming Japanese dramas but is not intended to be comprehensive.
View all posts by jadefrost →
This entry was posted in Fuji TV, Winter 2020 Dramas and tagged Emoto Akira, Honda Tsubasa, Mizuno Miki, Sawamura Ikki, Takasugi Mahiro, Zettai Reido Series. Bookmark the permalink.