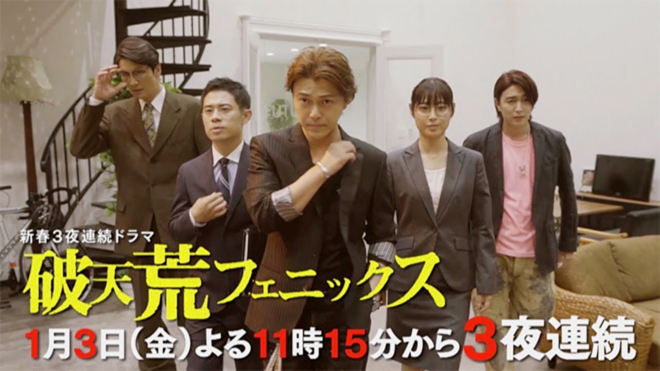 Date: From 11.15 p.m., 3 – 5 January 2020
Scriptwriter: Sakurai Tomoya
Original Work: Hatenkou Phoenix Owndays Saisei Monogatari by Tanaka Shuji
Cast: Katsuji Ryo, Ito Atsushi, Takimoto Miori, Inaba Yu, Maruyama Tomomi, Kanjiya Shihori, Kabira Jay, Masu Takeshi, Okuda Yohei, Miyazaki Tomu, Aitsuki Akiko, Nadaka Tatsuo
Synopsis: Tamura Yuji (Katsuji Ryo) runs a small design firm. One day, he suddenly acquires Sundays, an optical chain that is on the brink of bankruptcy, and becomes its new CEO. Yuji sets his sights on a global expansion and becoming number one in the industry. He exultantly makes his first appearance at Sundays together with Matsuo Hidekazu (Inaba Yu), a long-time friend whom he treats as a younger brother, and Okuda Yoshihiro (Ito Atsushi), a former elite banker whom he brought on board through persuasion and some force. However, the three of them are greeted by employees with frosty, defiant attitudes. Meanwhile, a statement of accounts prepared by Kanbe Asami (Takimoto Miori), who works quietly at an inconspicuous seat in the office, catches Yuji’s eye. Impressed by her attentiveness to detail and careful work, he selects her to be a a member of the project team that will report directly to him. This is how a new Sundays is born. Yuji intends to open new stores amid the company’s financial difficulties to symbolise the future of Sundays. Okuda insists that they need to undertake a bold cost cutting exercise by closing stores with poor sales and laying off employees. But Yuji considers people as assets and firmly refuses to retrench anyone. He even announces that he has already signed contracts for the new stores, leaving Okuda and others at their wits end. While Yuji is taking a break, the advertising and promotions manager Hashimoto Satoshi (Maruyama Tomomi), who has been sidelined, goes straight to him and asks to be put in charge of the Merchandise Department. Hashimoto used to be a buyer for a large apparel company in his previous job. He has knowledge of merchandise production and says he has confidence negotiating with suppliers. Yuji likes Hashimoto’s passion and readily agrees to put him in charge of the Merchandise Department. A goal is set to make Sundays the world’s best optical chain. As Yuji and the employees get down to work, the sales manager Mikami Eiji (Miyazaki Tomu) who is openly antagonistic and opposes Yuji’s way of doing things, submits his resignation along with his subordinates, and joins a competitor. Will Yuji and his team be able to overcome the series of setbacks ranging from funding woes to interference from rival brands, and spread their wings like the phoenix?
Official Website: www.tv-asahi.co.jp/hatenkou

This blog contains information and musings on current and upcoming Japanese dramas but is not intended to be comprehensive.
View all posts by jadefrost →
This entry was posted in TV Asahi, Winter 2020 Drama Specials and tagged Hatenkou Phoenix, Katsuji Ryo, Takimoto Miori. Bookmark the permalink.