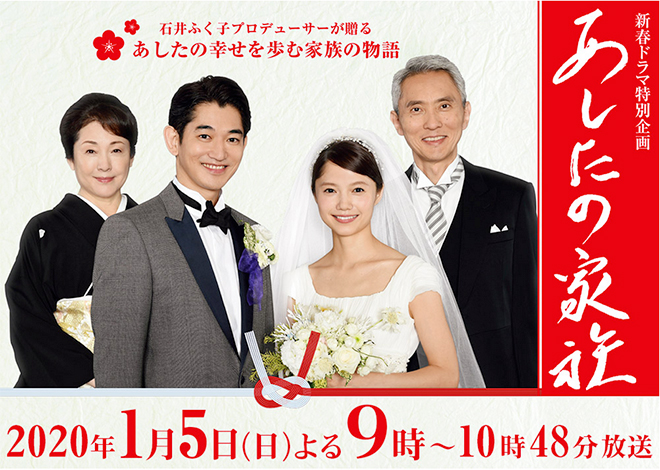 Date: From 9.00 p.m., 5 January 2020
Scriptwriter: Namie Hiroshi (Dinner)
Cast: Miyazaki Aoi, Eita, Ichiro Maki, Musaka Naomasa, Shibuya Asuka, Kondo Yoshimasa, Tamura Kentaro, Matsuzaka Keiko, Matsushige Yutaka
Synopsis: Four years ago, Onodera Risa’s (Miyazaki Aoi) groom ran away on the day of their wedding ceremony but she has completely bounced back from this episode. Her father Shunsaku (Matsushige Yutaka) was the head of a confectionary company’s sales department but he was assigned to another department in a personnel reshuffle. Her mother Machiko (Matsuzaka Keiko) is a cheerful full-time housewife. Wanting to live together with their daughter and her husband, Shunsaku and Machiko built a large home for a two-generation family. However, contrary to their expectations, the three of them now live in this big house. Hyodo Kotaro (Eita) assumes the role of the head of Shunsaku’s new department. He used to be Shunsaku’s subordinate but has now become his boss. Although Shunsaku is happy about Kotaro’s promotion, he has mixed feelings. The only place where he can complain about his job and family is at the pub that his childhood friend Murakami Yoichi (Musaka Naomasa) runs. Meanwhile, Machiko has been attending Kurahashi Kyoko’s (Ichiro Maki) classes because of her interest in flower arrangement. Kyoko is Yoichi’s ex-wife but also an important person Machiko who can talk to her about anything. Then one day, Risa brings her boyfriend home, saying that he has proposed to her. Her father takes a look at his face and is shocked. Risa’s boyfriend is Kotaro! He wants to give his blessings for Risa’s marriage but gets worried about living under the same roof with his boss. Will the four of them become a family?
Official Website: www.tbs.co.jp/ashitanokazoku

This blog contains information and musings on current and upcoming Japanese dramas but is not intended to be comprehensive.
View all posts by jadefrost →
This entry was posted in TBS/MBS, Winter 2020 Drama Specials and tagged Ashita no Kazoku, Eita, Matsushige Yutaka, Matsuzaka Keiko, Miyazaki Aoi. Bookmark the permalink.