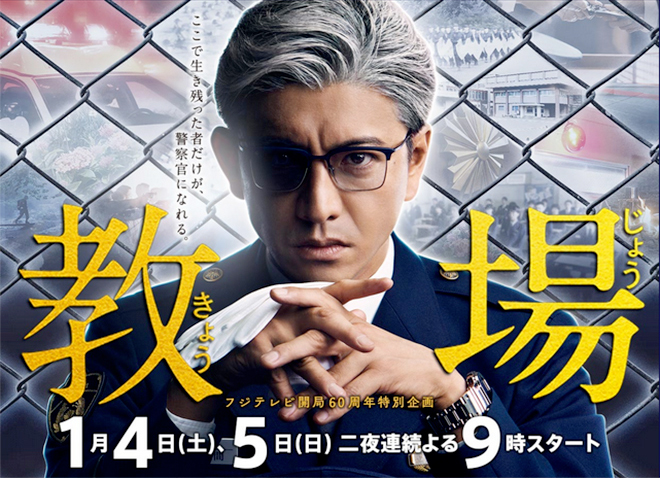 Date: From 9.00 p.m., 4 & 5 January 2020
Original Work: Kyojo by Nagaoka Hiroki
Scriptwriter: Kimizuka Ryoichi (Kareinaru Spy, Yakusha Damashii!)
Director: Nakae Isamu
Cast: Kimura Takuya, Kudo Asuka, Kawaguchi Haruna, Hayashi Kento, Aoi Wakana, Inowaki Kai, Nishihata Daigo, Tomita Miu, Mikata Ryosuke, Murai Ryota, Sato Hitomi, Wada Masato, Ishida Akira, Takahashi Hitomi, Kakei Toshio, Mitsuishi Ken (guest star), Oshima Yuko, Miura Shohei, Kohinata Fumiyo
Synopsis: Only the survivors become police officers at the police academy. This place is the start of desperate survival. Its classrooms are called “kyojo”. Kazama Kimichika (Kimura Takuya) is the extremely heartless instructor of the class for the 198th short-term course. The students are put through intensive training every day from the time they wake up at 6 am in the morning. They have to adhere to the rules. Their actions are constantly under surveillance and everyone is responsible if someone makes a mistake. In addition, their mobile phones have been confiscated and they need permission to go outside. Students from different backgrounds and with various motives have gathered at the police academy where the ultimate hardship awaits them. Miyasaka Sadamu (Kudo Asuka), a former elementary school teacher, has admired police officers ever since he was saved by one in an accident; Hishinuma Hazuki (Kawaguchi Haruna) prides herself in being the prettiest in class and is rather overconfident; Hirata Kazumichi (Hayashi Kento) is the son of a police officer but has the greatest difficulty keeping up in class; Kishikawa Saori (Aoi Wakana) who is timid and helpless, aspires to be a police officer to change herself; Kusumoto Shinobu (Oshima Yuko), used to be an interior coordinator and has the disposition of a big sister; and Kusakabe Jun (Miura Shohei) is a former professional boxer who is married and has children. They have conflicted feelings in this extreme situation. Kazama is a cold-hearted man who believes that the police academy is a place that eliminates people who are unqualified, and the moment a student has trouble, he will thrust an expulsion letter at the person. He always gives the students sudden commands that are hard to understand and leaves the place. In order to get through the survival game of the classroom where students are screened one after another, there is a jumble of secrets and ulterior motives that triggers all sorts of incidents. There are 30 students in Kazama’s class. How many of them will make it to the end without being eliminated and get their graduation certificates? And will Kazama be able to find out the complex web of truth of the incidents that the students have caused. What is his true objective for continuously giving the students mysterious trials that are somewhat absurd?
Official Website: www.fujitv.co.jp/kyojo

This blog contains information and musings on current and upcoming Japanese dramas but is not intended to be comprehensive.
View all posts by jadefrost →
This entry was posted in Fuji TV, Winter 2020 Drama Specials and tagged Hayashi Kento, Kimura Takuya, Kohinata Fumiyo, Kyojo Series. Bookmark the permalink.