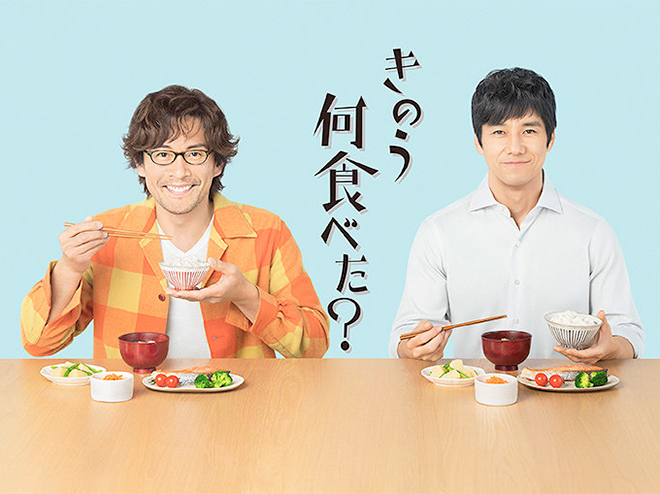 Chapter 1
One Friday night in March, Kakei Shiro (Nishijima Hidetoshi) and Yabuki Kenji (Uchino Masaaki) are summoned by their friend Kohinata Daisaku (Yamamoto Koji), who is a talent agency manager, to a very high-end barbecue restaurant that is popular with those in showbiz. His partner Inoue Wataru (Isomura Hayato) is also there. The actress Mitani Mami (Miyazawa Rie) arrives later while the four of them are eating. Shiro has been her big fan for years and cannot control his excitement although he tries to look cool when she thanks him for taking her manager’s divorce case. Seeing this, Kenji gets huffy and declares that he is Shiro’s partner. In fact, Kenji has been thinking about Shiro’s birthday surprise. Meanwhile, Shiro gets a phone call from his mother Hisae (Kaji Meiko). She wants to come up with the money for his father Goro’s (Tayama Ryosei) hospitalisation fees. When Shiro meets his friend Tominaga Kayoko (Tanaka Misako) at the supermarket, he pours out his anxiety about his parents’ funds for old age. 20 years ago, Hisae used money for something and has virtually no savings. However, Shiro thinks this is his fault.

Chapter 2
One Saturday in late April, Kohinata comes to Shiro and Kenji’s house looking haggard. He could not turn down last-minute work several hours earlier and accepted an actor’s invitation to gather clams at low tide. When he came home with a large amount of clams, Wataru, who was already in a bad mood because Kohinata cancelled their appointment, took a look and shouted that he dislikes clams. Then he got angry. Kohinata had no choice but to bring the clams to Shiro and Kenji’s house. It seems to be one of their regular tiffs but Kohinata has a grave expression on his face for some reason. One day, Wataru finishes work at home and searches for food in the fridge but cannot find something to suit his mood. Then he discovers a pack of clams that Shiro had given to Kohinata. Wataru thinks of something and goes out with the intention of making a rare meal. He meets Kenji while shopping and they hit it off with each other over an unexpected point that the two of them have in common.

Chapter 3
Kenji has been doing the cooking and household chores on behalf of Shiro who has been busy. Late one night in the middle of May, Kenji discovers he has spent more than expected in one week when he calculates the receipts, and feels troubled. Fearing that he will be scolded by Shiro, Kenji tries to cover this up. But he repents and starts to do research on ways to save money. Miyake Hiroshi’s (Makita Sports) wife Reiko (Okunuki Kaoru) advises Kenji to register for an app for leaflets which will allow him to see all the leaflets of supermarkets in the neighbourhood. As a result, Kenji is gradually able to maintain his budget. However, it has already been three weeks since he saw Shiro. Kenji seems like he will soon be overwhelmed with loneliness.