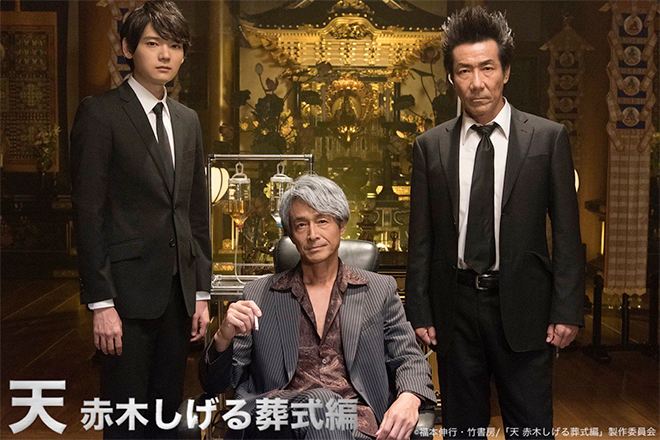 Date: From 9.00 p.m., 29 December 2019
Scriptwriter: Miyamoto Masaki (Ten ~ Tenhodori no Kaidanji)
Original Work: Ten ~ Tenhodori no Kaidanji by Fukumoto Nobuyuki
Cast: Kishitani Goro, Furukawa Yuki, Tanaka Yoji, Hoshida Hidetoshi, Tayama Ryosei, Denden, Matoba Koji, Yoshida Eisaku, Sotaro, Ohchi Hiroki, Kondo Ren, Ogura Haruka, Takizawa Kazunori
Synopsis: It has been three years since the East-West battle which was a near fight to the death. Igawa Hiroyuki (Furukawa Yuki) who has decided to become a pinch hitter after meeting Ten Takashi (Kishitani Goro), receives an email notifying him of the funeral service for Akagi Shigeru (Yoshida Eisaku), the legendary god of mahjong. Following the funeral, those in attendance are told that the people close to Akagi will hold an all-night vigil and the chief mourner who shows up in front of a bewildered Hiroyuki is none other Akagi himself. Hiroyuki is taken aback. Akagi tells him, “I should be dead several hours later.” He has Alzheimer’s and does not have long to live. The seven members in East-West battle including Ten, Asai Ginji (Tanaka Yoji), Igarashi Ken (Hoshida Hidetoshi) and Soga Mitsui (Denden) have been gathered for a last face-off with him one at a time. Can someone hold Akagi back from taking his own life?
Official Website: www.tv-tokyo.co.jp/ten

This blog contains information and musings on current and upcoming Japanese dramas but is not intended to be comprehensive.
View all posts by jadefrost →
This entry was posted in Fall 2019 Drama Specials, TV Tokyo and tagged Furukawa Yuki, Kishitani Goro, Ten Series. Bookmark the permalink.