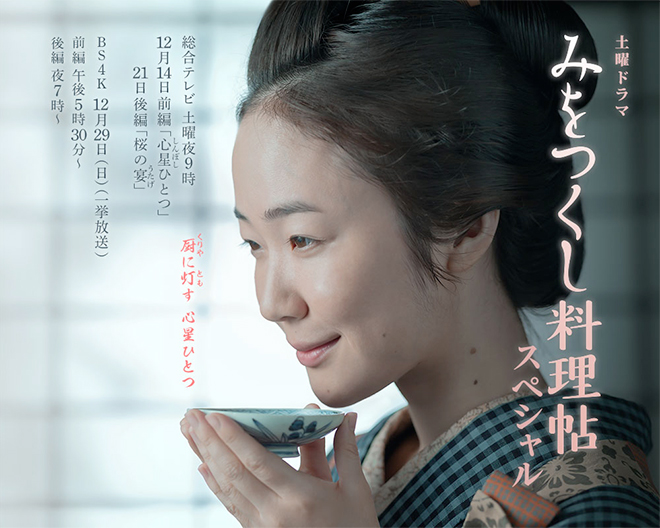 Date: From 9.00 p.m. 14 & 21 December 2019
Scriptwriter: Fujimoto Yuki (Chikaemon, Taira no Kiyomori)
Original Work: Mi o Tsukushi Ryouricho by Takada Kaoru
Cast: Kuroki Haru, Moriyama Mirai, Nagayama Kento, Narumi Riko, Hagiwara Masato, Kimura Yuichi, Murasugi Seminosuke, Yanagishita Tomo, Makita Aju, Namioka Kazuki, Sato Megumi, Nagao Mariya, Nakahara Takeo, Tokui Yu, Matsuo Suzuki, Ibu Masato, Aso Yumi, Fuji Sumiko, Kohinata Fumiyo, Yasuda Narumi
Synopsis: Tsuruya has been bustling daily with regular customers due to the popularity of female chef Mio’s (Kuroki Haru) food. The samurai Komatsubara (Moriyama Mirai) and doctor Nagata Gensai (Nagayama Kento) also visit now and then. One day, Saho (Sato Megumi), who is the wife of a samurai, comes with a request for Mio to teach her cooking. According to Saho, she is so dreadfully bad at cooking that even her servants fled. Yoshi (Yasuda Narumi), Taneichi (Kohinata Fumiyo) and everyone else at Tsuruya including Mio immediately feel affection for Saho, and Mio agrees to teach her after Taneichi gives permission. In truth, Saho is Komatsubara’s younger sister. Concerned that her older brother will remain a bachelor, Saho has come to probe his relationship with Mio. Not realising this, Mio completely opens up to Saho as if they are sisters and ends up talking about her feelings for Komatsubara. One day, Mio hears that Saho’s mother is suffering from swelling because of a kidney illness. Once Mio learns from the doctor that the seeds of some medicinal herbs can relieve swelling, she enlists his help to try and cook kochia. Her hands become chapped as she painstakingly prepares the kochia in the cold. When Mio finally delivers it to Saho for her mother, Saho drags her to a samurai residence. Saho tells her to make the meal in the kitchen to let her mother eat. Mio does as she is told and puts her heart into preparing it without knowing that this dish of kochia will affect her life. She brings it to Saho’s mother Ritsu (Fuji Sumiko) and they meet for the first time. Ritsu is surprised and smiles happily as she eats. Both Mio and Saho are relieved. However, after finishing her meal, Ritsu says some words that are quite unexpected to Mio … …
Official Website: www.nhk.or.jp/drama/dodra/miwosp