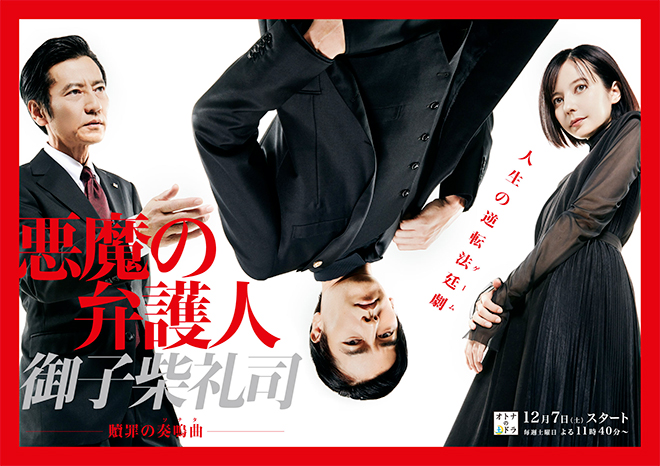 Story
An unemployed Kusakabe Yoko visits Mikoshiba Law Firm which has a broken signage bearing the company’s name. When she nervously tries to enter the office, there is a man sleeping on the sofa. He is Mikoshiba Reiji, the owner of the law firm. His eyes fly open and to her surprise, he says, “Your timing is precise. I’ll hire you.” A bewildered Yoko accompanies Mikoshiba to the court where she sees him shrug off the curses of “devil” by a victim’s mother. Mikoshiba is a “devil’s advocate” who will do whatever it takes to win a case for his client if he is handsomely rewarded. The cracked office signage is the work of disgruntled parties who lost in court. When Yoko asks if he is open to defending bad people, he declares that his policy is to do anything if he gets what he can get. Meanwhile, Mikoshiba shows an interest in the trial of Tsuda Akiko, a housewife in Tokyo’s Setagaya ward who killed her husband. She was found guilty and handed a 16-year prison sentence at the first hearing. After an affair, Akiko murdered her husband and also tried to abandoned her son. Public opinion is against the accused. However, Mikoshiba pressures Horai Kaneto, the lawyer in charge of Akiko’s trial to let him take over. Horai is baffled why he would defend an ordinary housewife with no assets. Meanwhile, Misaki Kyohei, the deputy chief prosecutor of the Tokyo District Public Prosecutors Office, receives word about the change in lawyers. He immediately announces that he will take charge of this case. A case that Misaki was once in charge of was overturned on appeal by Mikoshiba and he vows not to let it happen this time. To a man like Misaki who believes in punishment by law to keep order, a lawyer like Mikoshiba cannot be left unchecked. At the first hearing, Mikoshiba’s words “The defence submits that the accused Tsuda Akiko is innocent on the grounds that she had no intention to kill” causes an uproar in the courtroom. What is Mikoshiba’s motive?

Characters
Kaname Jun as Mikoshiba Reiji
A lawyer called “Devil’s Advocate” because he demands a handsome fee and will do whatever it takes to win the cases that he takes on. In fact, when he was 14 years old, he was Teen A who committed a violent crime. At that time, his name was Sonobe Shinichiro. However, he changed his name to Mikoshiba Reiji when he entered a juvenile medical reformatory and became a lawyer after he came out.

Becky as Kusakabe Yoko
An office staff of Mikoshiba Law Firm. She grew up without her father and won a scholarship to study in university. However, after graduation, she got a job at a company that exploited its employees. Her health suffered and she resigned. Her contract at the company where she was working as a temporary employee was also terminated. While she was unemployed, she was referred to her current role by the job placement office. She ends up learning about Mikoshiba Reiji’s past.

Tsuda Kanji as Misaki Kyohei
The deputy chief prosecutor of the Tokyo District Public Prosecutors Office. He is a strait-laced man who believes the law is absolute and that people who have committed crimes should receive appropriate punishment to maintain social order. He feels revulsion for Mikoshiba Reiji’s coercive tactics.

This blog contains information and musings on current and upcoming Japanese dramas but is not intended to be comprehensive.
View all posts by jadefrost →
This entry was posted in Fall 2019 Dramas, Fuji TV and tagged Akuma no Bengonin, Becky. Bookmark the permalink.