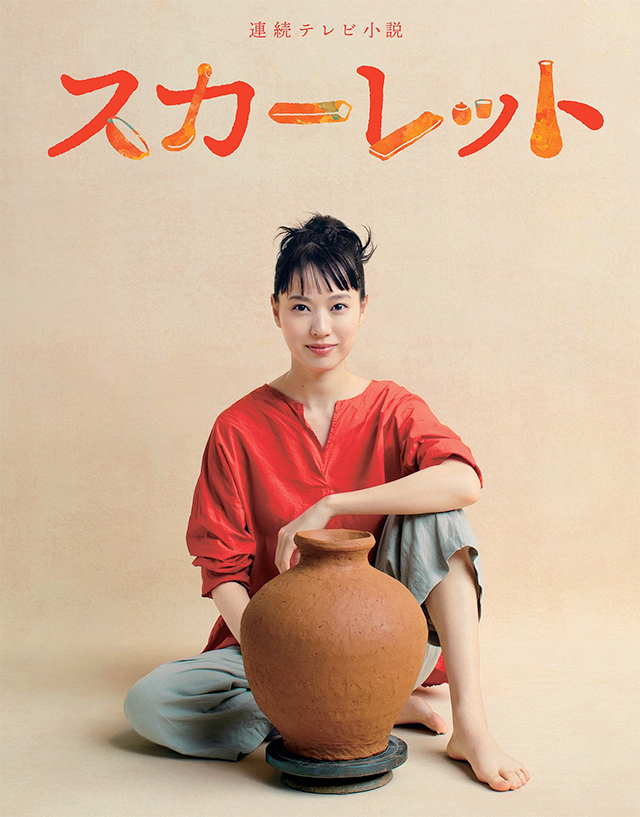 Story
In 1947, shortly after the end of the war, 9-year-old Kawahara Kimiko moves to Shigaraki, a pottery town in Shiga Prefecture, from Osaka with her father Joji, mother Matsu and two sisters. Owing to the helpfulness of the people of Shigaraki, they lead a happy life although they are poor. Kimiko encounters Shigaraki ware in the town. However, as the eldest of three girls, she has her hands full with attending school, looking after her sisters and helping out with the housework. One day, her father brings a young man called Kusama Soichiro home. Kusama was repatriated from Manchuria and has lost the will to live. But his spirits are slowly restored through his interactions with Kimiko and the family. As Kusama counsels Kimiko on her rude behaviour and praises her talent for drawing, she learns important lessons and grows. At the age of 15, Kimiko finds work in Osaka and grows further through meeting new people. Several years later, she returns to Shiragaki. Drawn to the local ceramic ware, she plunges into the male-dominated world. Kimiko thrives on her passion and joy for creating things. Undaunted by failure and setbacks, she proceeds to blaze a trail as a pioneering female ceramic artist. Kimiko falls in love and gets married to her husband who is also a ceramic artist. United by their aspiration to be the ideal creative couple, they strive to create unique Shigaraki ware with their own kiln. She becomes a mother of two children and also cultivates many disciples.

Characters
Toda Erika as Kawahara Kimiko
Born in Osaka as the eldest of three sisters, she moved to Shigaraki in Shiga Prefecture at the age of 9. A hardworking girl who has been supporting her family since she was a child. She grew up with the local Shiragaki ware but after the war, and spends her impressionable years in post-war Osaka which has made a remarkable recovery. She later returns to Shiragaki and plunges into the male-dominated world of ceramics and starts to blaze a trail as a pioneering female ceramic artist. She eventually has her own kiln and strives to create unique Shigaraki ware. Even after she gets married and becomes a mother, she is affectionate towards her disciples. Her passion for pottery is second to none. A good-natured person whom people often rely on, she does not pick on small things. She is good at drawing and judo.

Kitamura Kazuki as Kawahara Joji
Kawahara Kimiko’s father. Born in Osaka, he graduated from elementary school and went His parents have already passed away and he also lost two older brothers in the war. He apprenticed under a tradesman. Because he loves to speculate, he dabbled in all sorts of businesses before the war. But his habit of immediately showing off and treating people to drinks and helping people in need, made him completely penniless. To free himself from debt, he moves to Shiragaki with his family through his connections. He starts a transportation job in the ceramic industry which is on the rise. He is a domineering husband and loves his three daughters greatly, but he is strict in their discipline. Kimiko gets her cheerfulness and optimism from him.

Tomita Yasuko as Kawahara Matsu
Kawahara Kimiko’s mother. The daughter of a big landowner in Yao in Osaka. She eloped with Kawahara Joji who came in and out of her family home for business, and they got married with next to nothing. Gentle and calm by nature, she accepts what her husband does with a smile and follows him to Shiragaki without a fuss. Her health is frail and she relies on her hardworking oldest daughter Kimiko. She has Japanese and Western dressmaking skills, and is also educated. In fact, she secretly holds power. Kimiko is affectionate and tenacious like her.

Sakuraba Nanami as Kawahara Naoko
Kawahara Kimiko’s second sister. She still remembers being left behind in the air raid when she was 3 years old, and this has traumatised her. She hates to help out in the house. A wilful and free-spirited girl. Comparing Kimiko and herself, she somehow has the feeling that she has a disadvantage. She quickly runs away from Shiragaki. Contrary to her rebelliousness, she behaves like a spoilt child and frequently brings Kimiko trouble.

Fukuda Mayuko as Kawahara Yuriko
Kawahara Kimiko’s youngest sister. She was still a baby when the family moved from Osaka and truly grew up in Shiragaki. She is kind and gentle like her mother. Unlike her second sister Naoko, she stays on in Shiragaki. She tries to understand Kimiko and becomes her confidant.

Hayashi Kento as Ono Shinsaku
Kawahara Kimiko’s classmate. The only son of the owner of the general store in Shiragaki. He knows the Kawaharas because his parents helped with their house. He is good looking but does not appeal to their classmate Kumagai Teruko although he actively tries to impress her. He is the exact opposite of Kimiko, timid and reserved. When she returns from Osaka, the unexpected changes surprise him.

Mizobata Junpei as Sakata Keisuke
A medical student who stayed at the boarding house in Osaka where Kawahara Kimiko works. A well-bred and earnest young man. He is very kind to Kimiko who does her best as a servant. He is like an older brother to Kimiko, but unexpectedly becomes her love interest in a surprise turn of events.

Sato Ryuta as Kusama Soichiro
A man whom Kawahara Joji suddenly brings to Shiragaki and lives in the house for free. He worked in Manchuria during the war. He has been searching for his wife who went missing in the air raid in Japan. He treats a young Kimiko with warmth and sincerity. He is actually good at judo and Kimiko and all the children of Shiragaki take lessons from him. Even after he leaves Shiragaki, he would show up in front of Kimiko from time to time and prompts her to choose a new path.

Mizuno Miki as Ando Chiyako
A newspaper reporter whom Kawahara Kimiko gets acquainted with at the boarding house in Osaka where Kimiko ends up working. She does not care about details or herself but she is serious about work. She becomes a good friend of Kimiko’s and has a big influence on Kimiko, living as a woman with a job. Kimiko is soon inspired by her to take a new path.

This blog contains information and musings on current and upcoming Japanese dramas but is not intended to be comprehensive.
View all posts by jadefrost →
This entry was posted in Fall 2019 Dramas, NHK and tagged Fukuda Mayuko, Hayashi Kento, Kitamura Kazuki, Mizuno Miki, Sakuraba Nanami, Scarlet, Toda Erika. Bookmark the permalink.