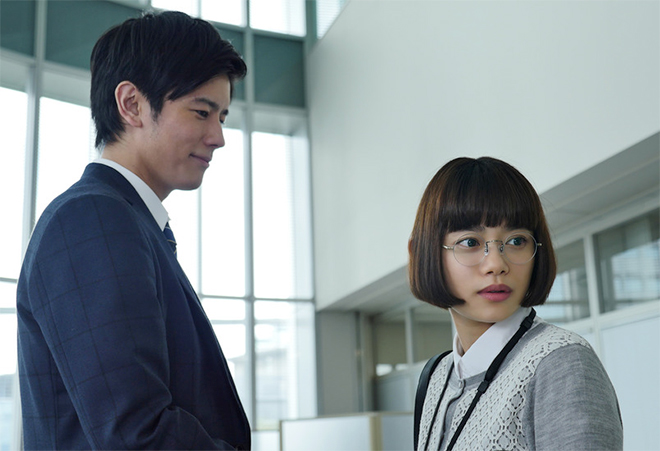 Cold Sleep
Story: Fujita Goro (Muro Tsuyoshi) is a CEO who has been described as the “whiz kid of IT” and “man who imagines the future”. He is trying to fulfil his childhood dream of becoming the first Japanese to travel in space. After preparations have been made, Fujita stands in front of a capsule along with Deputy CEO Oiwa (Sakurai Hijiri) and his only son Kohei (Nagano Sora/Ochiai Motoki). Oiwa eyes it anxiously. Several weeks ago, Fujita was diagnosed with an incurable illness and was given three months to live. The capsule that he is about to enter is a “cold sleep” machine that will keep living things alive in a low-temperature state and prevent ageing at the tissue level. He will be able to hibernate in this machine for up to 50 years and wake up four times during the journey. Fujita goes into hibernation in the hope that a cure will be found, but … …
Cast: Muro Tsuyoshi, Ochiai Motoki, Nagano Sora, Yanagi Yurina, Sakurai Hijiri

Koi no Kioku, Tomaranaide
Story: Singer-songwriter Murase Shiho (Saito Yuki) is in a panic as she has not been able to compose music like in the past. Although she sings live at a restaurant, no one listens to her and the comments on social media are caustic. Even her husband Nakai Kenji (Riju Go) supports her but seems a little exasperated. One day, Shiho ends up dozing off while working on a song and has a strange dream. She gets interested in a melody that was playing in the dream and composes a new song from memory. When she performs it at the restaurant, the customers look up from their meals all of a sudden, charmed by the song. Shiho starts to gain attention. She comes in 4th place in rankings the and even begins to get positive comments on social media. Then one night while Shiho is writing a song at home, she learns that the melody she had heard in her dream was the tune of a commercial for a TV programme that she once appeared in as a child. She realises that she has plaigiarised it … …
Cast: Saito Yuki, Riju Go

Solo Camp
Story: Fujiwara Joji’s (Itao Itsuji) hobby is to go camping alone as a treat after he finishes a big job. This solo camp is precious time for him to forget all the unpleasant things at work and be himself. One night, Fujiwara is enjoying camping alone like always when he hears the scrunch of gravel from the dark. The sound seems to get closer. He looks as hard as he can and notices a middle-aged man in an ill-fitting suit. With a smile on his face, the man sits opposite Fujiwara and starts to talk about his 5-year-old daughter. When he asks “Are you not afraid of camping alone deep in the mountains in the middle of the night? Fujiwara responds that he feels joy rather than fear. Then the man suddenly picks up the knife beside Fujiwara and stands up … …
Cast: Itao Itsuji

Futa
Story: One day, Yoshikawa Naomi (Sugisaki Hana) turns on her computer and is notified of a message along with a recommended product from an online shopping site. The message announces a new service for her desire for a better life. Naomi is not particularly interested and lets it pass. But she eventually ends up purchasing after being bombarded by numerous notifications. This turns out to be the favourite character merchandise of Arai Atsushi (Iwanaga Tetsuya), the senior whom she idolises. The next day, he speaks to her for the first time because of the merchandise. After that, Naomi has good luck each time she buys products recommended by the site, and even becomes appreciated by the people around her. The only puzzling thing is the pot lid that she does not know how to use. Even so Naomi continues to make use of the recommendations. She brightens up and gradually grows closer to Arai. She even goes out on a date alone with Arai. Naomi starts to feel confidence that someone like herself can be happy too. But she sees Arai and a colleague Teshima Yuka (Ishikawa Ren) seem chummy while they are going home … …
Cast: Sugisaki Hana, Ishikawa Ren, Iwanaga Tetsuya

Emiron
Story: One day, Yoshimura Emi (Shiraishi Sei) feels sleepy and dozes off during class. When she wakes up suddenly, the teacher is talking about her personal history, composition of her family and more. Then the teacher says, “This will come out in the test!” Emi takes a good look at the blackboard which is covered with her history and the name of the name of the subject on the textbook has changed to Emiron. Emi is so stunned that she is the curriculum that she gives an involuntary cry. However, both the teacher and the students around her regard Emiron as a subject like Japanese history and physics. Furthermore, the class even covers her fluctuating weight and ex-boyfriends. This is way too embarrassing for Emi. After class, she collides with a handsome guy Izawa Ryosuke (Yamashita Kohei) who is walking along the corridor. He is holding a reference book on Emiron. Emi is ecstatic after she hears that he has liked “Emi” since a long time ago, which turns out to be Emiron … …
Cast: Shiraishi Sei, Yamashita Kohei

This blog contains information and musings on current and upcoming Japanese dramas but is not intended to be comprehensive.
View all posts by jadefrost →
This entry was posted in Fall 2019 Drama Specials, Fuji TV and tagged Muro Tsuyoshi, Sugisaki Hana, Yo ni mo Kimyouna Monogatari Series. Bookmark the permalink.