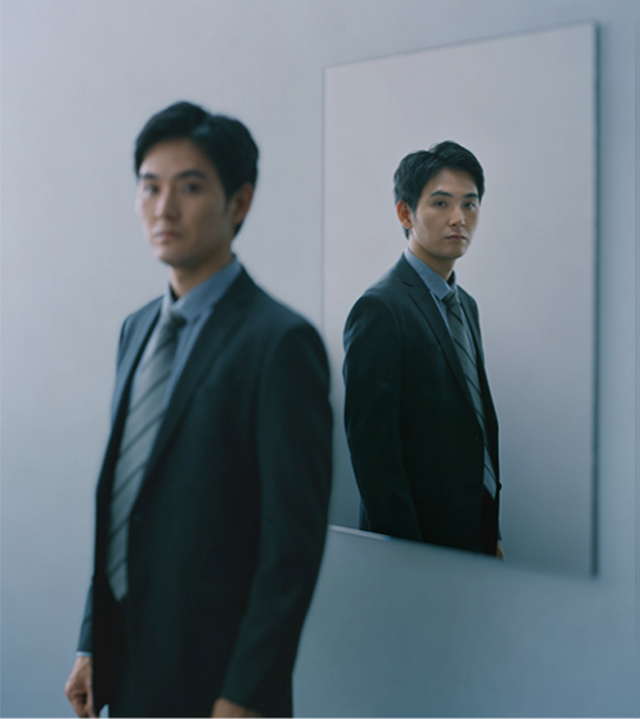 Story
Sawamura Masahiko is a roving reporter with a local newspaper, Shin Kanagawa Nippo. One day, he gets an scoop on a hit-and-run case. Morimoto Atsuko, the grieving wife of the man who died, is reportedly the culprit. Masahiko also hears that there is sufficient evidence to prove it. He gets excited by this scoop which is the first he has had in a long while, and immediately writes up a story. However, it is false information. Masahiko’s university schoolmate Mitazono Kunio, who is now the chief editor of an online news website called Fact Journal, suspects this fake news could have been planted by Masahiko’s colleague Kirino Hiroshi. Masahiko pursues Kirino who has disappeared. Meanwhile, Oga Masakazu, a former journalist of a national newspaper and a old friend of Masahiko’s father Ippei, pays Masahiko a visit. Oga has started investigating whether the suicide of a former colleague Kakiuchi Tomonari was due to an incorrect story that Kakiuchi published 15 years ago.

Characters
Matsuda Ryuhei as Sawamura Masahiko
A roving reporter with the newspaper, Shin Kanagawa Nippo. He obtains a scoop on a hit-and-run case. But it is actually fake news that a senior reporter Kirino Hiroshi planted, and he ends up publishing an incorrect story. Then Kirino vanishes and as he pursues the website, Make News, that was the source of the fake news, he faces up to the impact of his story.

Matsuyama Kenichi as Mitazono Kunio
The chief editor of the news website, Fact Journal. Sawamura Masahiko’s university schoolmate. He used to be a reporter at Dainichi Shimbun. He has been criticised by Masahiko for being heartless in his interview methods, but he unapologetically calls this “realistic”. Like Masahiko, he is also pursuing the website, Make News.

Koshiba Fuka as Morimoto Atsuko
The pregnant wife of the victim in a hit-and-run case. While she is grieving over the loss of her husband, she suffers because of Sawamura Masahiko’s incorrect story which dramatically changes her life.

Yamaguchi Sayaka as Nomura Misa
Sawamura Masahiko’s colleague. She is in charge of Shin Kanagawa Nippo’s digital media. She has a daughter who goes to nursery school and she is struggling to balance parenting and work.

Tsutsui Michitaka as Kirino Hiroshi
A roving reporter with the newspaper, Shin Kanagawa Nippo. Sawamura Masahiko’s senior at work. He disappears after the incorrect story is published. He used to work at Dainichi Shimbun and had covered a bank’s cover-up together with Masahiko’s father Ippei, Kakiuchi Tomonari and Oga Masakazu.

Mimura Rie as Sawamura Sayuri
Sawamura Masahiko’s wife. They have a son. She worked at a facility as a caregiver and got to know Masahiko when he visited the place for an interview.

Katsumura Masanobu as Nakajima Yuichiro
The editor of Shin Kanagawa Nippo’s local news desk. He has been working with Kirino Hiroshi on Project IJ which is dedicated to investigate journalism. However, they have not been able to deliver results and he becomes impatient. He attends the live shows of an idol group for a breather.

Kadono Takuzo as Sawamura Ippei
Sawamura Masahiko’s late father. He joined Dainichi Shimbun after graduating from high school and became a local news reporter. He got along well with Oga Masakazu and Kakiuchi Tomonari. He later became the head of the local news section but died all of a sudden. The truth behind this is … …

Nagatsuka Kyozo as Oga Masakazu
A former colleague of Sawamura Ippei and Kakiuchi Tomonari. He played the role of peacemaker to the other two who clashed with each other and was a good go-between. Together with Sawamura Masahiko, he goes after the reason for Kakiuchi’s suicide.

Issey Ogata as Kakiuchi Tomonari
He was a colleague of Sawamura Masahiko’s late father Ippei at Dainichi Shimbun and frequently quarrelled with him. He lived alone after his retirement but committed suicide all of a sudden. He took care of Kirino Hiroshi during his days as a reporter.

This blog contains information and musings on current and upcoming Japanese dramas but is not intended to be comprehensive.
View all posts by jadefrost →
This entry was posted in Fall 2019 Dramas, NHK and tagged Issey Ogata, Koshiba Fuka, Matsuda Ryuhei, Matsuyama Kenichi, Mimura, Nagatsuka Kyozo, Yuganda Hamon. Bookmark the permalink.