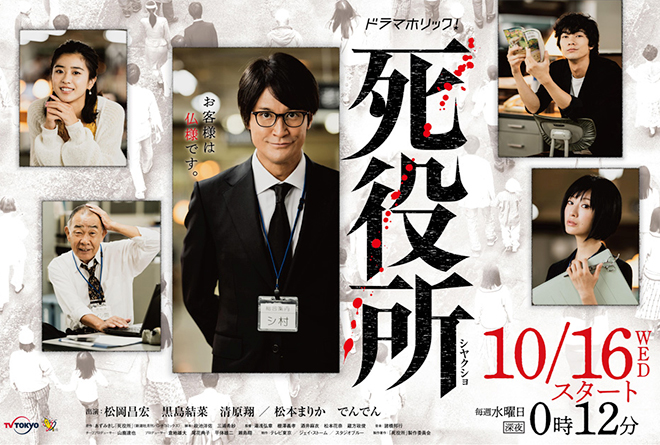 Story
The first place that departed souls visit is the Death Office. This office determines the destinations of those who have died of various reasons such as suicide, murder, illness and accidents. Shimura is a staff at the Death Office’s General Information Desk and he treats the endless stream of dead people who show up with feigned politeness. They range from those who accept death to those who do not grasp reality. How they lived and died is revealed by their written applications. The innocent go to heaven while the guilty go to hell. In fact, the staff of the Death Office have secrets. How did they end up working in this place after death? When Miki Michiru wakes up, she is in an unfamiliar place. She wonders where this is as someone calls out to her. It is Shimura and his words trigger memories of her murder. Michiru brings this to the attention of Ishima at the Death Office’s Murder Division and asks, “How can I take revenge on her?” Meanwhile, Shimura calls Kano Taichi, a third-year junior high school student who is sitting on a bench. He sees the boy’s bent leg and takes him to the Suicide Division. Taichi has to write the specific reason for his suicide in the permit application to go to heaven. He hesitates but starts writing that he did it because of malicious bullying and indifferent parents. As the unpleasant past comes back to him, he grows agitated. Then he meets someone at the Death Office … …

Characters
Matsuoka Masahiro as Shimura
An officer at the Death Office’s General Information Desk. He treats the endless stream of dead people who show up with feigned politeness. From the smile he pastes on his face, it is impossible to imagine his horrific past. He is a dark person with a mysterious and intense charm.

Kuroshima Yuina as Miki Michiru
A university student who died of acute alcohol poisoning at the age of 20. She is naive and selfish. Although her death was handled by the Accident Division, she wants it to be processed as murder because she was forced to drink alcohol, and remains at the Death Office. She gradually becomes curious about the secret behind Shimura’s smile … …

Kiyohara Sho as Hayashi
A staff of the Death Office’s Accident Division. A young man who seems to be the frivolous type that follows the crowd. He was profoundly influenced by his grandfather who was an actor in period dramas. Although he is burdened by the secret of his birth, he creates a happy family but … …

Matsumoto Marika as Nishikawa
A beautiful staff of the Death Office’s Suicide Division who is good at what she does. However, she does not smile and has a sharp tongue.
When she was alive, she was a beautician. She seems to get along with Shimura but has no interest in other people.

Denden as Ishima
A staff of the Death Office’s Murder Division. Although he looks fierce, he is compassionate and easily moved to tears. He is the conscience of the Death Office. When he was alive, he did not have children as he outlived his wife so he treated his niece Michi like a daughter. However, his life drastically changed when he got involved in an incident.

This blog contains information and musings on current and upcoming Japanese dramas but is not intended to be comprehensive.
View all posts by jadefrost →
This entry was posted in Fall 2019 Dramas, TV Tokyo and tagged Denden, Matsuoka Masahiro, Shiyakusho, Yo Kimiko. Bookmark the permalink.