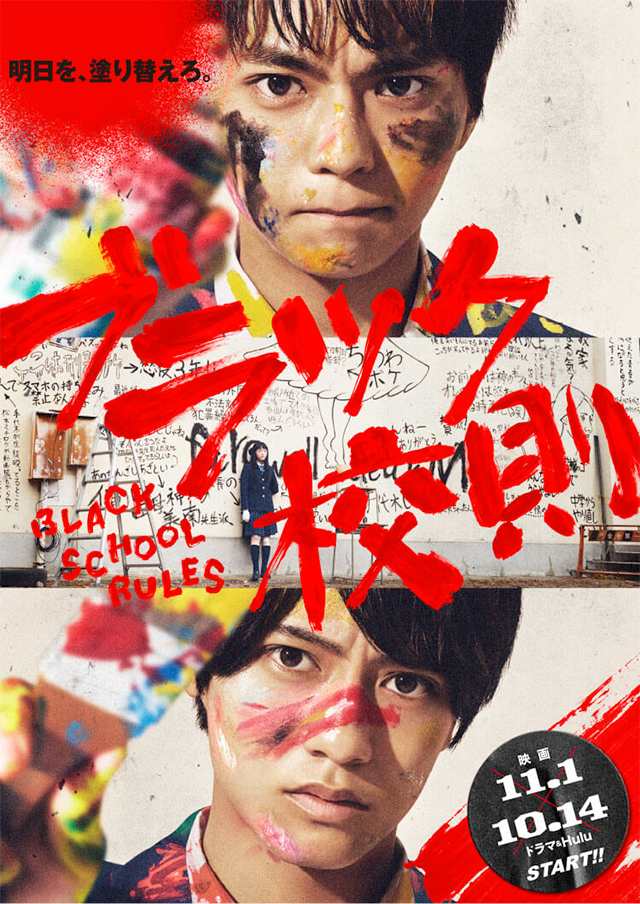 Story
Onoda Sora is a second year high school student. All the students at his school have the same hairstyle, uniform, bag and shoes. There is not a hint of individuality. Their school life is governed by unreasonable and excessively strict rules which place emphasis on discipline. Sora who is virtually invisible at school, leads a lousy adolescence at the bottom of the class. His good friend Tsukioka Chuya belongs to the same class and is the total opposite of Sora. Chuya does not read situations and his unpredictable behaviour always surprises those around him. There is a female student Machida Mao that the two of them are interested in. She cannot fit in at school and refuses to go to school because she is against dyeing the beautiful brown hair that she was born with to black. Sora and Chuya decide to crush their school’s unreasonable rules. Their decision soon develops into a situation that involves the whole school.

Characters
Sato Shori as Onoda Sora
A second year high school student. He is invisible like the air and is leading the worst student life at the bottom of the class. His love for Machida Mao spurs him to fight against the unreasonable school rules with his good friend Tsukioka Chuya.

Takahashi Kaito as Tsukioka Chuya
A second year high school student. He identifies with Onoda Sora feelings and they fight their school’s unreasonable rules together. He cannot sense the atmosphere in class and always surprises the people around him with his unpredictable behaviour.

Motola Serena as Machida Mao
The female student whom Onoda Sora likes. She has an aura of mystery. Because the school rules only permits black fair, she is forced to dye her naturally chestnut brown hair black.

Hotta Mayu as Miike Kotone
She is high up in the school’s caste system. She would rather obey the school rules than attract the attention of the teachers, and cleverly does as she pleases outside.

Tanaka Juri as Tanaka Michiro
The vice president of the student council who is also a gang leader. He belongs to the judo club. He uses the school rules to control the other students because he does not want to lose his position at the top of the school’s caste system.

Yanai Yumena as Kamisaka Kirari
The president of the student council who is too serious. She belongs to the track and field club. She believes that if there are no rules, she will not be able to live due to anxiety.

Sakai Maki as Machida Mari
Machida Mao’s mother. She speaks and acts freely, and lets Mao do what she wants. She thinks her daughter is justified in leaving school if she has to obey the school’s unreasonable rules.

This blog contains information and musings on current and upcoming Japanese dramas but is not intended to be comprehensive.
View all posts by jadefrost →
This entry was posted in Fall 2019 Dramas, NTV and tagged Black Kousoku. Bookmark the permalink.