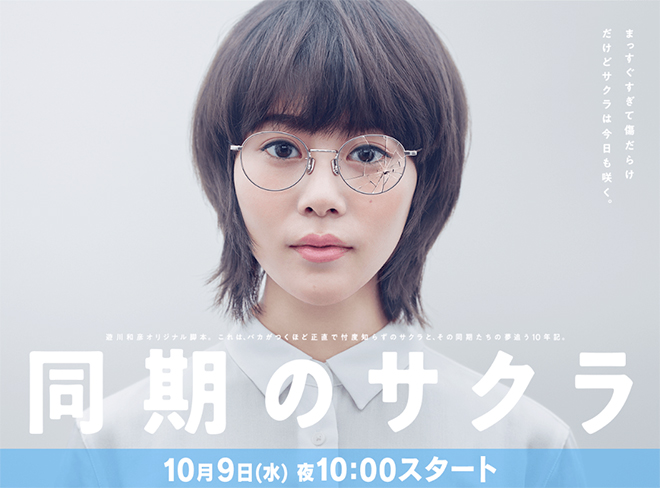 Story
A woman named Kitano Sakura lies on a hospital bed. She is unconscious and hooked up to an artificial respirator. Her colleagues Tsukimura Yuri, Kijima Ao, Shimizu Kikuo and Doi Rentaro, who are the only four people whose contact information are listed in her mobile phone, receive word and rush to her side. All four of them share the same thought, “There’s no reason living in a world without Sakura …” 10 years earlier in the spring of 2009, Hanamura Construction, the largest general construction firm in Japan, is holding its annual welcome ceremony for its new graduates. Sakura is conspicuously a country bumpkin. She hails from a small, sparsely populated northern island and joined the company because of her dream “to build a bridge that joins my hometown to mainland!” She leaves a strong impression when she opines that the CEO’s speech is long, a remark that stuns the people around her. After the ceremony, it is announced that the final project for the three-week induction is to create a model of a structure that the new employees want to leave for future generations, and this will determine which department they will be assigned to. Sakura is chosen to be the leader of a group which includes the cool Yuri, ambitious Ao, enthusiastic Kikuo and negative Rentaro. Sakura speaks openly about her desire to get into the civil engineering department because of her dream to build a bridge for her island when asked at a get-together with her new teammates. The four of them are bewildered by her personality and inscrutable expression. Sakura single-mindedly charges toward her dream. However, her inability to consider the feelings of others causes an unthinkable situation and throws her off the career track. She sticks to her convictions despite adversity and gradually inspires her colleagues, who initially did not want to have anything to do with her, to have a change of heart and get involved.

Characters
Takahata Mitsuki as Kitano Sakura
Born on an island, she treats the islanders like family and is close to other people too. She is full of love and firm. She never guesses and never gives an inch. She loves to say, “I have a dream”. She sends a fax to her grandfather every day. When she feels weak, she craves her grandfather’s croquettes.

Hashimoto Ai as Tsukimura Yuri
Born in Tokyo, she graduated from a famous private university. Her parents run a construction business and have the look of new money which she does not like. She is taken with high society. She wants to have a good time and live without working hard like today’s youth. She is constantly searching for a place where he can be himself.

Arata Mackenyu as Kijima Ao
Born in Tokyo, he lived abroad before returning to Tokyo. Although he grew up in a wealthy family, his outstanding older brother and stern father look down on him and he does not feel comfortable at home. Because of that, he puts on a brave front. He truly wants to become a CEO and reads between the lines a lot of the time.

Ryusei Ryo as Shimizu Kikuo
Born in Kumamoto, he is from a well-known private university. The annoyingly enthusiastic type, he honestly wants to be of help to his colleagues and people who do their best. He sends a monthly allowance to his family.

Okayama Amane as Doi Rentaro
Born in Tokyo, he graduated from university after failing the entrance exam twice. He aspires to be a first-class architect and studies hard because he does not want to take over his family’s Chinese restaurant. He is thinks negatively about everything.

Aibu Saki as Hino Sumire
She works for Hanamura Construction’s Human Resource Department. She takes care of the new graduates from the time they come on board. She is struggling with raising her child and her work.

Shiina Kippei as Kurokawa Morio
The head of Hanamura Construction’s Human Resource Department. He is not apparent whether he is a good boss, ally or foe.

This blog contains information and musings on current and upcoming Japanese dramas but is not intended to be comprehensive.
View all posts by jadefrost →
This entry was posted in Fall 2019 Dramas, NTV and tagged Aibu Saki, Douki no Sakura, Hashimoto Ai, Shiina Kippei, Takahata Mitsuki. Bookmark the permalink.