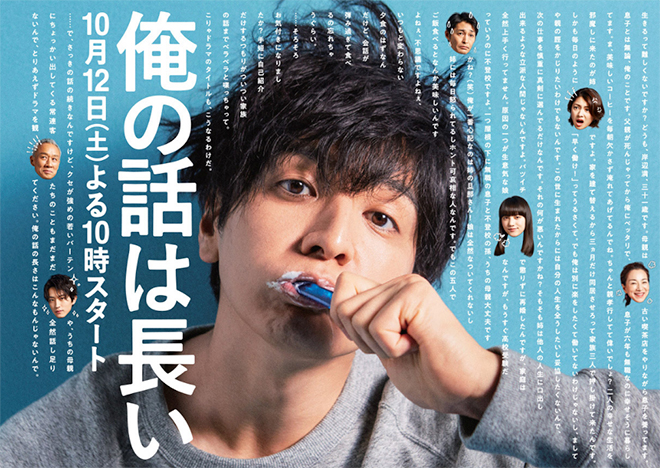 Story
31-year-old Kishibe Mitsuru has been unemployed for seven years now. After graduating from university, he got hooked on coffee and started a business six years ago but it failed. However, no one can beat him in a war of words and he keeps using twisted logic to make excuses for his shortcomings. Mitsuru lives off his mother Fusae, who runs the cafe left to her by her late husband. But one day, his older sister Ayako and her husband Akiba Koji come over to the house with beef for sukiyaki. The purpose of Ayako’s visit is to get permission for her family including her teenage daughter Harumi to live with them for three months while the house is being rebuilt. Mitsuru hates sukiyaki and the siblings get into a war of words. Nevertheless, it is decided that they will all live together and preparations begin. Mitsuru goes with Koji to sell old books that he does not need, and learns about his brother-in-law’s troubles. Since his marriage to Ayako, he has had to deal with Harumi’s refusal to acknowledge him as her father on top of doing whatever Ayako says. Mitsuru promises to take Koji’s side. Mitsuru finds his life change all of a sudden as Ayako and her family live with them. With her in the mix, huge changes are in store. Ayako concludes that Mitsuru is simply escaping from reality and faults their mother for how he turned out. These words hit Fusae where it hurts. She challenges Ayako to try making Mitsuru get a job while she camps out here and Ayako gets that gleam in her eyes. Will Mitsuru be able to turn his disastrous situation and stand on his own two feet?

Characters
Ikuta Toma as Kishibe Mitsuru
He has been a NEET (not in education, employment, or training) since six years ago. He wants to do something about it but his special talent for quibbling and making excuses for himself helps him to escape from reality. He is living off his mother Fusae.

Koike Eiko as Akiba Ayako
Kishibe Mitsuru’s older sister who is a divorcee. A career woman, she has a lot on her mind raising her teenage daughter Harumi, her child with her ex-husband.

Yasuda Ken as Akiba Koji
Kishibe Mitsuru’s brother-in-law and the man whom Ayako remarried. His greatest wish is for his stepdaughter Harumi to acknowledge him as her father. He feels isolated at home.

Kiyohara Kaya as Akiba Harumi
Akiba Ayako’s 15-year-old daughter. She is a third year student at a private junior high school but she has been cutting classes. She despises her stepfather for doing whatever Ayako says.

Harada Mieko as Kishibe Fusae
The mother of Kishibe Mitsuru and Akiba Ayako. She is a cheerful lady who has been running the cafe Polaris on her own since her husband passed away.

This blog contains information and musings on current and upcoming Japanese dramas but is not intended to be comprehensive.
View all posts by jadefrost →
This entry was posted in Fall 2019 Dramas, NTV and tagged Harada Mieko, Ikuta Toma, Kiyohara Kaya, Koike Eiko, Ore no Hanashi wa Nagai, Yasuda Ken. Bookmark the permalink.