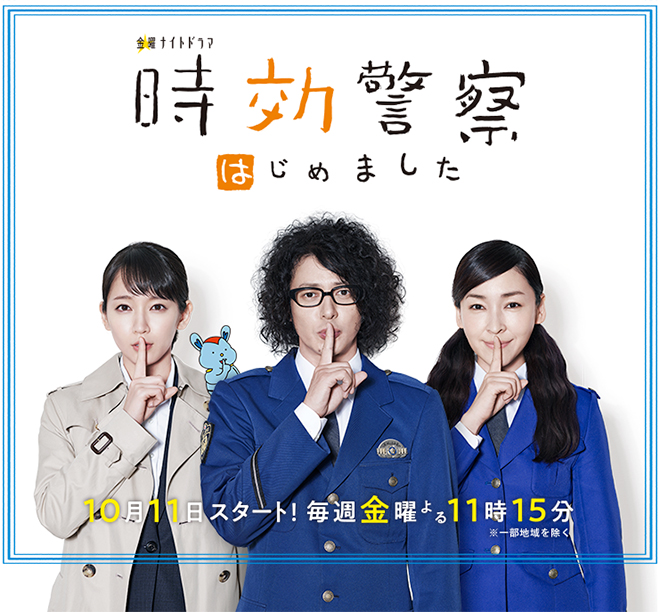 Story
Kiriyama Shuichiro returns to Japan after a 12-year secondment to the FBI in the US, and rejoins the Statute of Limitation Management Division at Sobu Police Precinct. The primary job of this division is to send documents on cases where the statue of limitations have run out to the prosecution, and to manage these investigation materials. However, ever since the statue of limitation was abolished for serious cases such as murders, the division has become more redundant than ever. Kiriyama returns to his old haunt and gets started on his hobby again with his assistant Mikazuki Shizuka. It is to personally investigate cases where the statute of limitation is expiring. He is not particularly concerned about identifying the criminal or the size of the cases. All he wants to do is to make sure his deductions are correct. One day, Kiriyama receives a box of personal effects that has been inside a refrigerator from a woman who works at the precinct’s cafeteria. Someone had misread the characters Kaname Tamazo that was written on the box and thought it required refrigeration. The box was kept in the refrigerator for over 10 years past the statue of limitation. Kaname is a man who was called Sobu’s Utamaro for his promiscuity. 25 years ago, his ex-lover Kaminuma Kinue who was the founder of Asura no Mizu, a new religious sect, was found frozen to death in a fisheries processing company’s freezer room. She was caught on a security camera entering the freezer room. But right after that, the door was locked from the outside even though there was no one. Because Utamaro, who was the prime suspect, also died from carbon monoxide poisoning around the same time as Kinue, the case went unsolved. Kiriyama starts to investigate the case accompanied by his assistant Mikazuki Shizuka. They visit Kaminuma Misako, Kinue’s daughter who was also Utamaro’s wife. The second leader of the religious sect, Misako’s response to the story of the case is vague despite her keen interest in Kiriyama. Kiriyama eventually forms the hypothesis that Hanasaki Shinichi, a member of the sect, was the accomplice in the two cases because he has liked Misako all along. At the same time, a hand-written note with mysterious numbers among the personal effects is stuck in his mind.

Characters
Odagiri Joe as Kiriyama Shuichiro
12 years ago, he was chosen to be a member of a government programme for some reason and seconded to the FBI in the US. He was under the impression that he would be on the fast track. But when he returned to Japan, he was assigned to Sobu Police Precinct’s Statute of Limitation Management Division once again. His hobby is to personally investigate cases that come to his attention among the documents accumulated at the division. When he investigates cold cases, he demonstrates his skills all of a sudden. Despite his powers of observation, he does not care to use it for work.

Aso Kumiko as Mikazuki Shizuka
The deputy of Sobu Police Precinct’s Traffic Division. She tried to be Kiriyama Shuichiro’s girlfriend in the past. But in the end, he went to America before she could convey her feelings. Her happiest moments were having to accompany him for the investigations on cold cases, and she felt empty. About six years ago, she got married to a detective with the Criminal Affairs Division, but they soon divorced due to a personality mismatch. They did not have children and she now lives alone. However, she still cherishes the marriage certificate stolen from Kiriyama and his return to the precinct makes her restless.

Yoshioka Riho as Ayakumo Masora
A rookie detective in Sobu Police Precinct’s Criminal Affairs Division. A passionate young woman who does her best in everything. She also gives her all for the daily “surveillance training” imposed on her by Jumonji Hayate and his cryptic instructions. Although she is told that she does not talk about interesting things, she has an unexpectedly wide breadth of interests and knowledge from novels to pro wrestling. She is particularly interested in the investigations that Kiriyama Shuichiro reopens into cases that have reached the statue of limitation. She hangs around the Statute of Limitation Management Division without Jumonji seeing her and sticks her nose into their investigations.

Toyohara Kosuke as Jumonji Hayate
The ace of Sobu Police Precinct’s Criminal Affairs Division. He thinks he is perfect as a detective with his passion for investigations and obsession over his trench coat, but he does not really know anything. He brags about his achievements and is a little out of place with his taste in jokes and behaviour that misses the point … but he is a playful character who is impossible to hate. He has recently found a sense of purpose guiding the rookie detective Ayakumo Masora. The only hang-up that this narcissist has is failing the university entrance exams thrice in the past. He regards Kiriyama Shuichiro as his rival.

Mitsuishi Ken as Morosawa
A forensic officer who works for Sobu Police Precinct’s crime lab. He is calculating and a penny-pincher who asks for a small reward every time he is asked by Kiriyama Shuichiro to examine the case he is investigating. His fees have tiers commensurate with the work required. His hobby is to photograph unusual things that he sees on the streets. He enjoys showing Kiriyama this photo collection a little at a time.

Iwamatsu Ryo as Kumamoto
The head of the Statute of Limitation Management Division at Sobu Police Precinct. His primary responsibility is to use the “Statute of Limitation” seal on the files of cases that have reached the statue of limitation. He is the sole breadwinner of the family and is supposed to be responsible at work and at home. But he is irresponsible and disorganised. While he stands out for actions spurred by ideas and remarks that do not make sense, he is an extremely good-natured person. He is easily influenced by fads and has a tendency to collect all sorts of things although he often contributes to Kiriyama Shuichiro’s investigations.