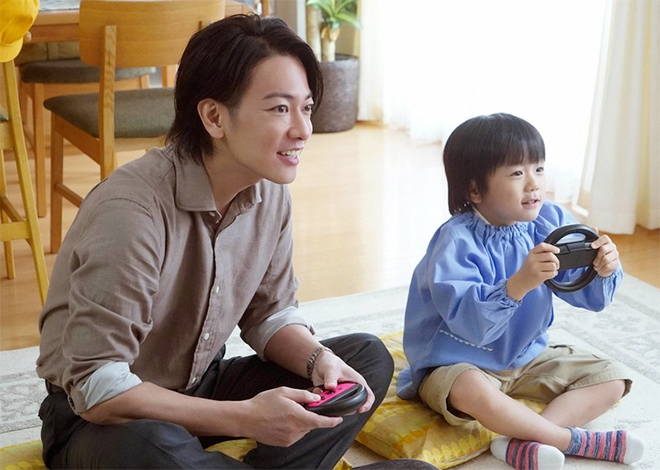 Kyuuen no Manazashi
Story: Miyazaki Takashi (Sato Takeru) lives an ordinary but happy life with his wife Asuka (Abe Junko) and their son Satoshi (Mori Yurito). There is rather child-like part of him that becomes engrossed in video games with Satoshi and ends up getting yelled at by Asuka. One day, Takashi is playing with his son at a park when he notices a creepy woman. He is not too concerned about her. But after that, he continues to catch sight of this woman on the way home from work and even when he is in the bus to work. Then one night, Takashi feels a presence in bed fit perfectly to his back. He thinks it is his wife, but Asuka is in front of him! Takashi gingerly turns around only to find that creepy woman with bloody eyes. What is the identity of this woman who is terrorising him?
Cast: Sato Takeru, Abe Junko, Mori Yurito, Shuri

Akai Shuuchaku
Story: Miyaoka Mai’s (Nakajo Ayami) parents died in an accident half a year ago, and she now lives with her young sister Ayaka (Awano Sari). Mai drops out of university and works constantly in order to earn a living. On the way home from work one day, she feels a presence as she steps out of an elevator at the public housing complex where she lives. When Mai looks down, a woman with long black hair who is dressed fully in red is looking up at her. At first, Mai thinks the woman is a resident at this housing complex and relates this to Yoshioka Masao (Miki), who is a regular customer at the Japanese-style pub where she works part-time, like funny story. She lives normally but slowly starts to feel uncomfortable. One day, she is suddenly asked by Otani Hiroki (Izumisawa Yuki), Yoshioka’s junior at work, if something strange has happened lately. Then Mai experiences hair-raising fear because of that woman in red.
Cast: Nakajo Ayami, Awano Sari, Miki, Izumisawa Yuki

Kata no Onna
Story: Hikawa Takehiko (Sasaki Kuranosuke) quit his job as a salaryman and finally opened a ramen shop. This was his long-cherished dream of 10 years. However, he is troubled that there are no customers at all even though the both the location of the shop and the taste of the ramen is not bad. Hikawa vaguely realises the reason why customers do not come. A woman with only the upper half of her body has coiled around the shoulders of Tachibana Keisuke (Sano Hayato) who works part-time for him. Hikawa believes that customers will come to the shop if he makes Keisuke, who is being haunted by the woman, quit. However, he does not have the heart to fire the cheerful and good-natured Keisuke. Hikawa tries to purify Keisuke with salt but it does not work. This time, a woman with only the lower half of her body shows up at the shop. Hikawa throws salt at both women with grim determination and they disappear. After that, the shop fills up with customers and does brisk business. However, when Hikawa gets into his bed feeling a pleasant exhaustion from his first busy day, the woman with only the lower half of her body appears … …
Cast: Sasaki Kuranosuke, Sano Hayato

Tsukue to Umi
Story: Wedding planner Tanaka Masami (Matsumoto Honoka) has started living alone, which is something she had always wanted. She moved with the help of Kawashima Yuki (Adachi Rika), a senior at her workplace. The furniture for Masami’s new home are all her favourite items that were purchased from a thrift shop. She falls in love at first sight with a desk and buys it. Even Yuki compliments her choice which matches the style of her apartment. Late at night on the first day Masami moves in, she is surprised by a clattering sound. Even though she looks in the direction of the noise, all she sees is the desk and she does not give it a second thought. However, after that, she experiences sleep paralysis while her father is suddenly hospitalised for an unknown medical problem. Masami is dogged by misfortune. She consults Yuki who introduces her to a woman. This woman correctly guesses that Masami bought a table recently and tells her to burn it on the beach of Kujukuri at 3.00 a.m. in the morning or her life will be put in danger. Masami follows the woman’s advice, rents a light truck and heads to Kujukuri, but … …
Cast: Matsumoto Honoka, Adachi Rika

Dare ni mo Ienai
Story: Toda Minako (Suzuki Honami) is the form teacher of Class 3/1 at an elementary school. She graduated from this school and returned to her alma mater as a teacher. Minako had often seen mysterious phenomenon at the school since the time she was an elementary school student, and there have been constant rumours about the classroom for Class 3/1 in particular. Even after Minako returned as a teacher, the door of the closet for cleaning equipment would suddenly open or the flower vase placed on the teacher’s table would break without warning. After school one day, Minako is asked by a student called Sato (Saito Taiyo) who believes she can also see the strange happenings but she ignores him. Some time later, Sato transfers schools because of his father’s job. However, the mysterious phenomenon continues to happen in the classroom. Minako thinks to herself, “I know what’s causing it.” Some object beyond imagination is in her line of sight … …
Cast: Suzuki Honami

This blog contains information and musings on current and upcoming Japanese dramas but is not intended to be comprehensive.
View all posts by jadefrost →
This entry was posted in Fall 2019 Drama Specials, Fuji TV and tagged Honto ni Atta Kowai Hanashi Series. Bookmark the permalink.