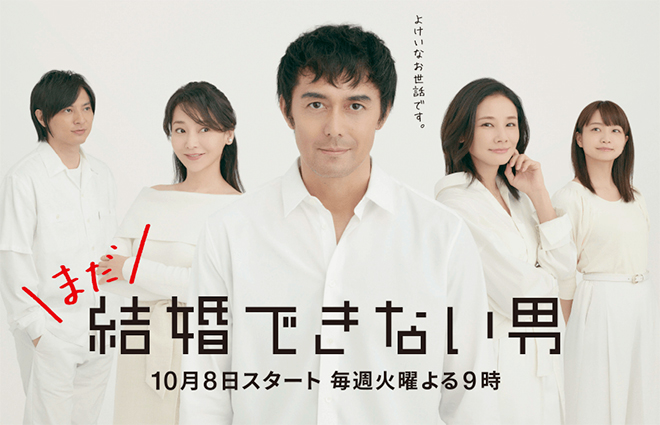 Story
Kuwano Shinsuke, a successful architect, is good-looking, knowledgeable and earns more than the average person. He is now 53 and even more eccentric. Kuwano still lives alone in the same apartment which has the latest gadgets, and enjoys single life. Although he fell for Hayasaka Natsumi, the doctor who treated him and changed his perspective toward marriage, and even dated, they later broke up. So Kuwano’s heart is shut firmly to love again even though he feels a little anxious when he thinks about the future. His mother Ikuyo and younger sister Keiko lament his proud, obsessive and cynical personality, but his brother-in-law Yoshio remains his confidant. One day, the wheels of fate start to move all of a sudden after Kuwano’s chance encounter with some women. While doing a routine internet search on himself, Kuwano notices that Yakkun’s blog, which has been critical of him, is rising in the search rankings, and he is visibly irritated. He consults the lawyer Yoshiyama Madoka whose law firm happens to be in the neighbourhood. Kuwano’s cranky behaviour bewilders Madoka and she tells him that he will easily make enemies. However, Kuwano is indifferent to her caustic remark and later visits the court to size up Madoka’s ability as a lawyer. He sits in on a divorce case much to her surprise. Madoka is the lawyer for Okano Yukie whose husband has filed for divorce and on this day, the husband’s affair becomes a point of contention. But there is no conclusive proof and Yukie is at an overwhelming disadvantage. After the court is adjourned, Kuwano happens to hear the husband and his lawyer talk in the toilet. Yukie is receptive to a settlement where she can lead a quiet life rather than money and Kuwano offers an unsolicited suggestion, “How about a settlement?” Meanwhile, a young woman Tonami Saki moves into the apartment next to Kuwano’s … …

Characters
Abe Hiroshi as Kuwano Shinsuke
An architect. His looks, income, social status, in fact everything is above average. However, he shows no signs of getting married. That is because of his eccentric and cynical personality. He means no harm but he constantly clashes with the people around him. He surrounds himself with the latest gadgets at home and enjoys single life. Although he dated the doctor Hayasaka Natsumi 13 years ago, she gave up on him and they broke up. He continued to push ahead in his work. But in this age where people can expect to live to the age of 100, it is no wonder that there are occasions when he thinks about having to spend the remaining half of his life alone, and feels anxious.

Yoshida Yo as Yoshiyama Madoka
A lawyer who is single. She runs her own law firm and Kuwano Shinsuke consults her as a lawyer. But she gets confounded by him because she is serious by nature, and they end up arguing frequently. However, this brings them closer together somehow or other although it is not clear whether that is love.

Inamori Izumi as Okano Yukie
She is hired to be the manager of the cafe Brown Clover. She is gentle in her manners and the type that needs protection. She happens to make Kuwano Shinsuke’s acquaintance through the divorce trial. She does not dislike Kuwano who is awkward but well-meaning. Kuwano also likes her and goes to the cafe which he finds cozy.

Tsukamoto Takashi as Murakami Eiji
He used to be Kuwano Shinsuke’s assistant but several years ago, he became his business partner. Although he is grateful to Kuwano for what he is today, he shuns Kuwano’s example.

Fukagawa Mai as Tonami Saki
A young lady who has moved next door to Kuwano Shinsuke. She hides her face with a big mask and sunglasses. Because the rent is high, it is a mystery whether she has a high-paying job or rich parents. Moreover, there are times when she can be heard arguing with a man … …

Omi Toshinori as Nakagawa Yoshio
He was Kuwano Shinsuke’s friend from the start and was introduced to his younger sister Keiko whom he married. He became Kuwano’s brother-in-law and remains his only friend and confidant. A doctor and the director of a hospital. He and Kuwano occasionally complain to each other over drinks.

Miura Rieko as Nakagawa Keiko
Kuwano Shinsuke’s younger sister and Nakagawa Yoshio’s wife. She is strong-willed and has a sharp tongue. She and her daughter Yumi have Yoshio under their thumbs. She wants her brother who is still single and living freely even though he is over 50, to shape up.

Kusabue Mitsuko as Kuwano Ikuyo
Kuwano Shinsuke’s mother. She used to consider every woman around her son as a candidate to be her daughter-in-law. But now that Kuwano is over 50, her enthusiasm has waned. However, in her heart, she continues to worry about her son’s future. She is probably similar to Kuwano in the way that she takes things at her own pace.

This blog contains information and musings on current and upcoming Japanese dramas but is not intended to be comprehensive.
View all posts by jadefrost →
This entry was posted in Fall 2019 Dramas, Fuji TV and tagged Abe Hiroshi, Inamori Izumi, Kusabue Mitsuko, Mada Kekkon Dekinai Otoko, Omi Toshinori, Ozaki Masaya, Tsukamoto Takashi, Yoshida Yo. Bookmark the permalink.