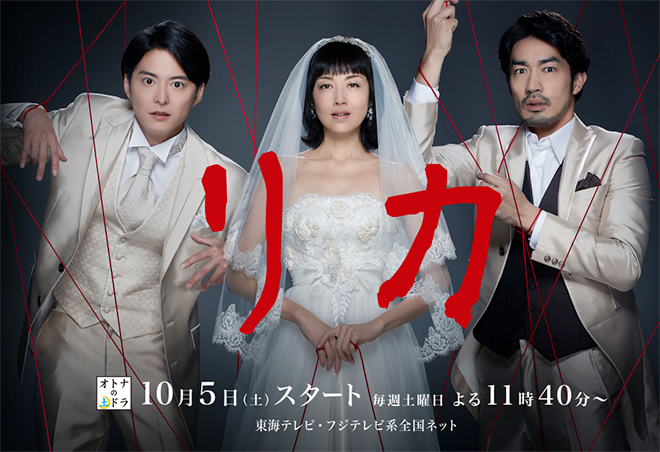 Story
Amamiya Rika has been starved of family love. She feels empty. Lonely. Her yearning for a family steadily grows. When she meets the man who fits her idea of the perfect husband, marriage and family, her pure love explodes. She is oblivious to anyone other than this person of her destiny. Actually, anyone who blocks her marriage will end up becoming her enemy. She will do everything she can to get the man she loves. Rika’s first target is Oya Masashi, an outstanding surgeon at the privately-run Hanayama Hospital. He has a fiancee and everything is going well for him until he meets Rika who comes for an interview as a nurse. She claims to be 28 years old which Oya finds odd. However, she has considerable experience and even a written recommendation from the previous chairman of the national association of doctors which gets her hired on probation despite the opposition of the head nurse Osanai Noriko. This is all part of Rika’s plot. Mysterious incidents keep happening at the hospital and patients, nurses as well as doctors vanish. Then Rika also gets her clutches on Oya’s fiancee … … Three years later, Honma Takao becomes Rika’s second target. Honma is living apart from his wife Yoko and their 7-year-old daughter because of Yoko’s infidelity. He makes the acquaintance of a woman who uses the name Rika through a matchmaking app and suggests that they meet. However, she keeps stalking him on his mobile phone with a deluge of messages and phone calls, and even at his office and home. Honma’s colleagues, wife and daughter and even detectives get entangled.

Characters
Takaoka Saki as Amamiya Rika
A mysterious nurse who comes over to Hanayama Hospital. She conceals a ghastly birthmark on her left arm with foundation. Everything including her work experience, current address and age has been fabricated. She is devoted in her love but it is always unrequited. She attempts to create her own ideal world with the men she believes to be her destiny, and will even kill anyone she deems to be an obstacle. Her view on marriage is that a woman’s ultimate happiness is getting married at 28 and start a family. She loves words from men that satisfy her need for self-affirmation and mistakes them for the person of her destiny. She has had a lonely life and a darkness in her heart. Each time she seriously falls in love, she goes after the man as her lifetime partner.

Koike Teppei as Oya Masashi
Amamiya Rika’s target. The deputy director of Hanayama Hospital. The hospital’s director Hanayama Daijiro is his father’s older brother. He is stalked by Rika as the man of her destiny. He takes actual control of the hospital on behalf of Hanayama who is ill. Although he is a skilled doctor, he is a little indecisive and always worried with thoughts about the people around him. He is engaged to Sato Mayumi, a young resident who works at a university hospital. He gradually loses staff that he can trust because of Rika and he starts to get put in danger … …

Otani Ryohei as Honma Takao
Amamiya Rika’s target three years after Oya Masashi. He is a producer who works for a movie production company. After tying the knot with his wife Yoko, they had a daughter Aya who has grown up adorable. He discovered Yoko’s infidelity half a year ago. She took Aya with her and they have been living separately. In the midst of this, he meets Amamiya Rika through a matchmaking app that he had accessed for the purpose of research for his work. This is the entrance to hell … …

Natsuna as Okadome Chiaki
She is in charge of the front desk at Hanayama Hospital. She tweets her observations of the baffling commotion happening in the hospital as well as the web of human relationships, and also makes her own inferences about various suspects within the hospital using her powers of deduction. She later gets divorced and goes back to her maiden name Kanazawa. She works at a movie company and anonymously tweets about the daily events surrounding the movie production department. She meets Amamiya Rika again when Rika comes to the company in pursuit of Honma Takao.

Tokunaga Eri as Honma Yoko
Honma Takao’s wife. She works for a national restaurant chain. Because she has become intimate with her boss, she has been living apart from Honma since six months ago. As her parents live close by, she takes their daughter Aya with her. She has a hard time making up with him.

Kashiwabara Shuji as Harada Shinya
An investigator who is a former detective. He is hired by Honma Takao and uses the skills he honed as a detective to track Amamiya Rika.

Nishioka Tokuma as Hanayama Daijiro
The director of Hanayama Hospital. Oya Masashi’s uncle. He suffered a stroke and is taking charge of the hospital while staying in its VIP room. He has made significant contributions to local health care. He was an earnest man. However, after the movements on the right side of his body are restricted following the stroke, he grows increasingly bad-tempered. Amamiya Rika cunningly wins him over and starts to make use of him little by little … …

This blog contains information and musings on current and upcoming Japanese dramas but is not intended to be comprehensive.
View all posts by jadefrost →
This entry was posted in Fall 2019 Dramas, Fuji TV and tagged Koike Teppei, Otani Ryohei, Rika Series, Takaoka Saki. Bookmark the permalink.