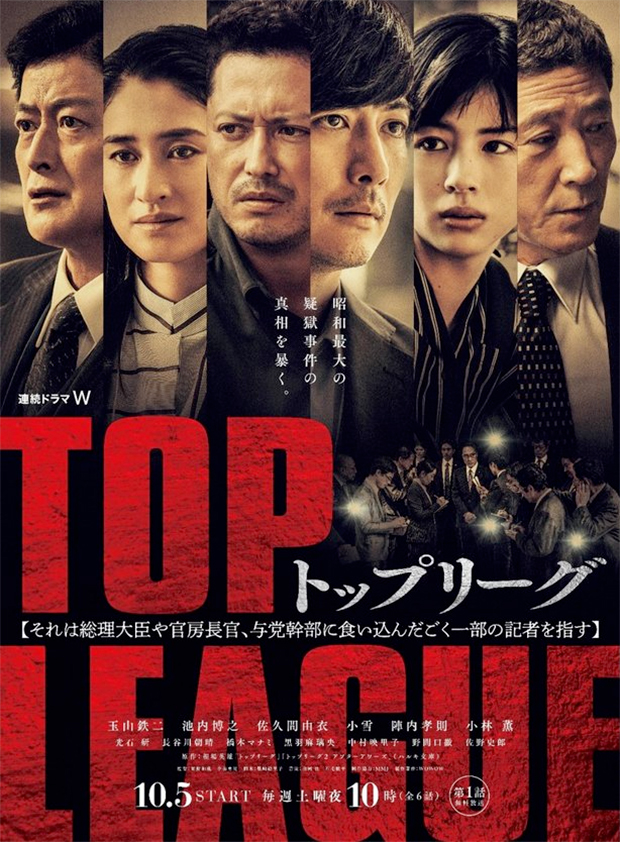 Story
The news of the discovery of a safe with a large amount of money in a Tokyo landfill changes the fate of two members of the media. Matsuoka Naoki is a journalist who has worked for the business desk of Daiwa Shimbun, a major Tokyo-based newspaper publisher, for 15 years. One day, he is told that he is being transferred to the political desk for a year. On Matsuoka‘s first day in his new position, he is advised by Akutsu Yasuo, the head of the political desk, not to look for trouble. However, he disregards the rules at the first of Chief Cabinet Secretary Kondo Michiie’s scheduled briefings he attends. When Matsuoka seeks Kondo’s opinion on the safe discovered in a landfill in Minato ward, this catches Kondo’s attention for some reason and Matsuoka rises to the top league. Meanwhile, Sakai Yuji, a weekly magazine reporter who used to be Matsuoka’s colleague, has been pursuing the truth of the 150 million yen in old banknotes that was found in the landfill. Then a robbery takes place. The victim is someone whom Sakai had just interviewed regarding the safe. Matsuoka and Sakai have gone along different paths as reporters. However, their reunion after 10 years, begins to expose the biggest taboo in the official residence which rocks the country’s political centre.

Characters
Tamayama Tetsuji as Matsuoka Naoki
A journalist with Daiwa Shimbun, a major newspaper in Tokyo. He is transferred from the business desk to the political desk with the promise that it will be a one-year stint. At first, he is unhappy with this arrangement which is against his will. But after he catches the eye of Chief Cabinet Secretary Kondo Michiie, he rises to the top league. He has a young daughter Saki with his wife Aiko who is a freelance writer.

Ikeuchi Hiroyuki as Sakai Yuji
An ace reporter with the weekly magazine Shukan Shin Jidai. He used to be Matsuoka Naoki’s colleague and a political journalist at Daiwa Shimbun. However, he resigned from his job all of a sudden. While pursuing the mystery of a safe that was discovered in a landfill, he gets close the truth of the country’s largest bribery scandal in the history of the Showa period, but … …

Koyuki as Haibara Miki
A business journalist with Daiwa Shimbun. She joined the newspaper in the same year as Matsuoka Naoki and they are on good terms. She aims to move to the political desk one day and join the top league.

Sakuma Yui as Ohata Yasue
A rookie reporter with the weekly magazine Shukan Shin Jidai. She dreamt of interviewing Hollywood stars but now spends each day going after scandals. She targets a big scoop in order to get a project that she wants to do passed, and assists Sakai Yuji.

Kobayashi Kaoru as Kondo Michiie
The Chief Cabinet Secretary who remains a permanent fixture despite the cabinet reshuffle. He takes notice of Matsuoka Naoki after Matsuoka ignored the rules of the the regular press briefing and asked a question. He invites Matsuoka to a social gathering that is only open some journalists.

Mitsuishi Ken as Shibata Yoshikazu
A detective with the Tokyo Metropolitan Police Department’s First Investigation Division. He and Sakai Yuji exchange information on a regular basis. In the process of providing information on the safe that was discovered in a landfill, he gets too involved in the matter … …

Sano Shiro as Awara Tsunetaro
The Prime Minister. A lawmaker of the Minsei Party. who comes from a family of politicians. He has faith in his Chief Cabinet Secretary Kondo Michiie.

Jinnai Takanori as Akutsu Yasuo
The head of Daiwa Shimbun’s political desk. He is called Nagatacho’s Top League and is also respected within the company. He warns Matsuoka Naoki on his first day not to look for trouble.

This blog contains information and musings on current and upcoming Japanese dramas but is not intended to be comprehensive.
View all posts by jadefrost →
This entry was posted in Fall 2019 Dramas, WOWOW and tagged Ikeuchi Hiroyuki, Kobayashi Kaoru, Koyuki, Mitsuishi Ken, Sano Shiro, Tamayama Tetsuji, Top League. Bookmark the permalink.