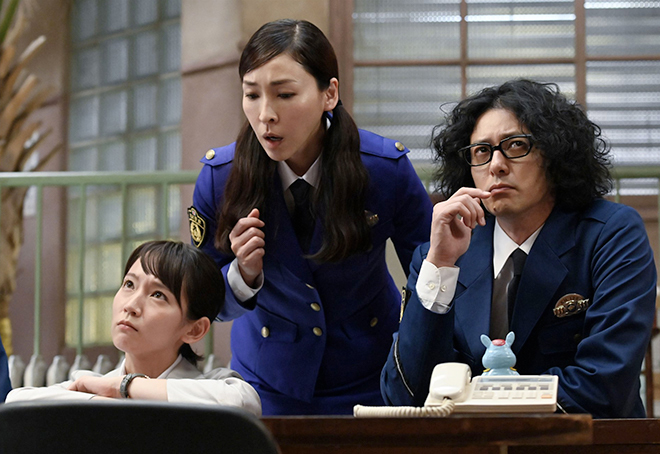 Date: From 9.00 p.m., 29 September 2019
Scriptwriter: Miki Satoshi (Atami no Sousakan, Jikou Keisatsu Series)
Cast: Odagiri Joe, Aso Kumiko, Yoshioka Riho, Isomura Hayato, Toyohara Kosuke, Eguchi Noriko, Fuse Eri, Hida Yasuhito, Mitsuishi Ken, Iwamatsu Ryo, Takeda Shinji (guest star), Kikuchi Rinko (guest star), Yo Kimiko (guest star)
Synopsis: Kiriyama Shuichiro (Odagiri Joe), who investigates cases that have reached the statute of limitation as a hobby, was sent to FBI. 12 years later, he unexpectedly returns to Sobu Police Precinct’s Statute of Limitation Management Division. Kiriyama also takes an interest in the Urashima gasoline stand fire case that took place 24 years ago. The gasoline stand in the deserted port town of Urashima was not only completely burned down. It caused a huge explosion and a badly burnt body was discovered from the charred pile of rubble. At that time, the police concluded that the victim was Sawamura Koji, a high school student who was a former part-timer, from the physique and the uniform button that the dead body had been holding. The investigation included the possibility of an accident, murder and suicide but the truth remained shrouded in darkness. Strangely, nine years ago, the statute of limitation for murders was abolished just one day before of the statute of limitation ran out. Kiriyama has had nothing in particular to do since he came back to Japan, and decides to try investigating this case. Mikazuki Shizuka’s (Aso Kumiko) romantic feelings for Kiriyama are rekindled. She volunteers to help in the investigation even though she is from the Traffic Division. In addition, the rookie detective Ayakumo Masora (Yoshioka Riho) pokes her nose into investigations of cold cases and her primary role in the Criminal Affairs Division takes a backseat. That weekend, Kiriyama and Mikazuki head to a police box in the town of Urashima to gather information on the case. They learn that the burnt body was found in a vacant room at that time, and Sawamura’s parents have divorced. The whereabouts of mother Kanako (Yo Kimiko) and father Shinichi are not known. Furthermore, that is all they are able to establish. The other day, a writer called Kuhonbutsu Sayaka (Kikuchi Rinko) showed up at the police box and asked about the case. Kiriyama is curious to know why she is investigating the same case as they are at the same time. He immediately gets in touch with Sayaka and finds out that she is not following Sawamura’s case. She claims to have visited Urashima in pursuit of Bimajo Fujiwara (Takeda Shinji), a widely popular personality who is 71 years old but has the body of someone in his 40s. She believes he is lying about his age. However, Kiriyama suspects a connection between Sawamura’s case and Bimajo from Sayaka’s nonchalant behaviour and presses ahead with the investigation. A shocking truth eventually emerges.
Official Website: www.tv-asahi.co.jp/jikou2019

This blog contains information and musings on current and upcoming Japanese dramas but is not intended to be comprehensive.
View all posts by jadefrost →
This entry was posted in Summer 2019 Drama Specials, TV Asahi and tagged Aso Kumiko, Jikou Keisatsu Series, Kikuchi Rinko, Odagiri Joe, Yo Kimiko, Yoshioka Riho. Bookmark the permalink.