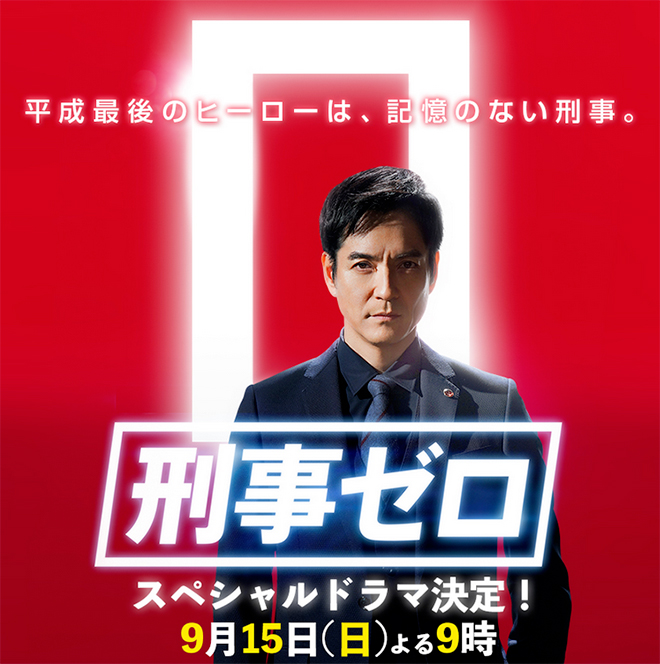 Date: From 9.00 p.m., 15 September 2019
Scriptwriter: Todayama Masashi (Keiji Zero, Ishi Tsubute, Specialist Series)
Cast: Sawamura Ikki, Takimoto Miori, Terajima Susumu, Yokoyama Daisuke, Nekoze Tsubaki, Watanabe Ikkei, Zaizen Naomi, Takeda Tetsuya, Daito Shunsuke (guest star), Ono Nonoka (guest star), Namioka Kazuki (guest star), Hasegawa Tomoharu (guest star)
Synopsis: Tokiya Rekihiko (Sawamura Ikki), Sasou Tomoka (Takimoto Miori) and the other members of the Thirteenth Section at Kyoto Prefectural Police’s First Investigation Division set off on their annual company trip. This year, the theme is mystery tour so they are led to a hotel near the summit of Mt Rokko in Kobe without knowing their destination. However, despite the large size of their lodgings, the only hotel guests besides the members of the Thirteenth Section are a group of six people who seem distant. When a suspicious Tokiya asks them, they reveal that they just met today. They are all acquaintances of Kuroe Michiru, a university student who died nearby seven years ago – psychiatrist Sone Kazumi (Daito Shunsuke); model Akashi Mai (Ono Nonoka); events company executive director Anzai Tatsuki (Namioka Kazuki); freelance writer Miyaura Itsuo (Hasegawa Tomoharu); cram school teacher Kasagi Toko (Miyaji Mao); and flower shop manager Hagimura Shigekazu (Nagashima Toshiyuki). All of them came here after receiving mysterious invitations from the hotel. In fact, seven years ago, an IT company CEO who stayed in this hotel, was murdered in a forest nearby. The next day, a wooden shed behind the hotel went up in flames and Michiru’s body was discovered in the charred ruins. At first, it was believed that the two cases were the work of a murder-robbery criminal who is on the run. However, the wife of the CEO turned out to be the true culprit. She not only killed her husband for his money, but also appeared to have murdered Michiru who happened to stay at the same hotel because she presumed Michiru had seen through her fake alibi. The next morning, the members of the Thirteenth Section leave the hotel and head to the hot springs. But Tomoka has come down with a fever. Fearing that his memory loss would be exposed if she is not around, Tokiya also decides to remain in the hotel. However, someone destroys the tunnel leading from the hotel to the town, making it impossible for vehicles to pass through. The antenna and phone lines have also been cut off leaving them with no way of communicating. In other words, there is no way to ask for help. Tokiya, Tomoka and the other six guests are confined in this hotel which has become an “isolated island”. Right after that, Mai’s dead body is found suspended from the “Bell of Eternal Love” at a sightseeing spot close by and everyone is shocked. Then another murder occurs within the premises of the closed hotel. Even Tokiya himself eventually feels threatened and this causes his missing memories to return … …?!
Official Website: www.tv-asahi.co.jp/keiji-0

This blog contains information and musings on current and upcoming Japanese dramas but is not intended to be comprehensive.
View all posts by jadefrost →
This entry was posted in Summer 2019 Drama Specials, TV Asahi and tagged Keiji Zero Series, Sawamura Ikki, Takeda Tetsuya, Takimoto Miori, Terajima Susumu. Bookmark the permalink.