Posted on September 3, 2019 by jadefrost 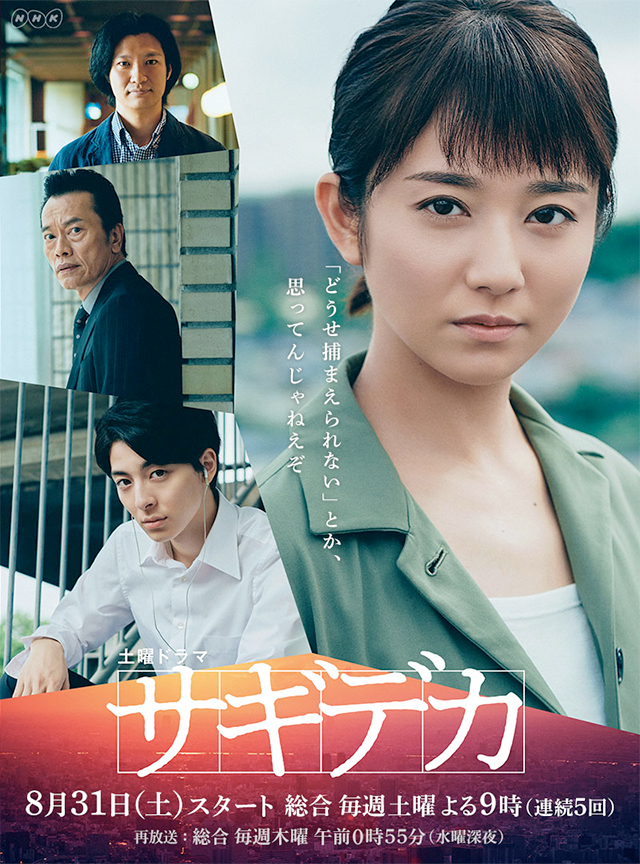 Story
Detective Imamiya Karen belongs to the Second Investigation Division which is in charge of white-collar crime. She thoroughly and single-mindedly investigates and tracks down criminals wherever they are on her bike. Her secret investigation pays off, allowing her colleagues including Moriyasu Shingo to burst into a secret operations base and successfully arrest the criminals behind a bank transfer scam. However, this bunch are at the bottom of the organisation and do not know anything about the higher-ups who have the large sums of money. In an interrogation with Imamiya, one of the young men called Kaji Hayato starts to make a strange claim that their “job” is of help to society. Imamiya’s section chief Tezuka Kenzo proposes that Imamiya let Kaji go free in the hope that he will make contact with the top. This is the start of Imamiya’s long “game” with Kaji. Meanwhile, Imamiya meets Meguriya Makoto, a well-known entrepreneur, at the yakitori shop that her grandmother Shinobu runs and the two of them hit it off … …

Characters
Kimura Fumino as Imamiya Karen
An assistant inspector who specialises in investigating special types of fraud such as bank transfer scams. She feels strongly about arresting those behind these scams and closes in on these criminals through single-minded and thorough investigations. She is perturbed that she has been rather easily reduced to tears lately. Motorbikes are her interest.

Mashima Hidekazu as Moriyasu Shingo
An assistant inspector who is diligent, competent and handsome. He has been told by Imamiya Karen that he will not understand someone’s feelings.

Endo Kenichi as Tezuka Kenzo
An inspector. Imamiya Karen’s section head. He leads the investigation of bank transfer scams. He proposes letting Kaji Hayato go free to find out whether he will make contact with the higher-ups in his organisation.

Tsurumi Shingo as Kitahara Soichiro
A superintendent. The director of the division. He is a little worried about the time and and budget for the investigation, and is reluctant to start it from bottom up.

Takasugi Mahiro as Kaji Hayato
One of the criminals in the bank transfer scam, he plays the role of the person who makes the phone calls and cheats people. He grew up in unfortunate circumstances and gets involved in fraud in his attempt to succeed in society. Even after he is arrested, he insists that his actions were justified. However, a strange relationship of trust gradually grows between him and Imamiya Karen.

Aoki Munetaka as Meguriya Makoto
A well-known entrepreneur who is dedicated to the development of new drugs. He makes Imamiya Karen’s acquaintance through motorbikes and they oddly hit it off.

This blog contains information and musings on current and upcoming Japanese dramas but is not intended to be comprehensive.
View all posts by jadefrost →
This entry was posted in NHK, Summer 2019 Dramas and tagged Adachi Naoko, Aoki Munetaka, Endo Kenichi, Izumi Pinko, Kimura Fumino, Mashima Hidekazu, Sagi Deka, Takasugi Mahiro. Bookmark the permalink.