Posted on September 1, 2019 by jadefrost 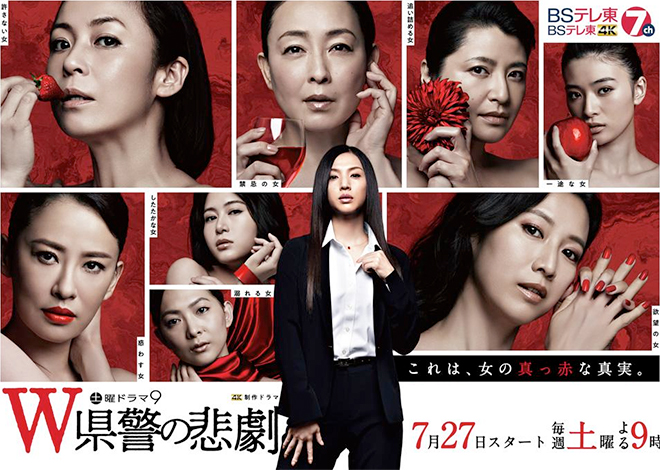 Story
A gathering of the top brass of the prefectural police headquarters, dubbed “Entaku Kaigi” or roundtable conference, is held in a special private room at Tamayoshien, the most exclusive Chinese restaurant in W Prefecture. One woman is summoned to this tremendously powerful roundtable, which is the highest decision-making body. She is an inspector called Matsunaga Nahoko. Nahoko pushes herself every day with the intention of becoming a member of this roundtable in order to pave the way for female police officers in the prefectural police which remains chauvinistic and old-fashioned. Her job is a position that can be called “police among the police” and she exposes mistakes and the truth about cases to clean up issues before they become detrimental to the prefectural police. She holds her own with female police officers in the various police precincts, making full use of her powers of observation and insight. However, none of them are easy women. Even so, Nahoko is broad-minded enough to be tolerant with an eye toward joining the Entaku Kaigi. But each woman seems to have some sort of secret … …

Characters
Ashina Sei as Matsunaga Nahoko
An inspector called the “police of police”. She was promoted to Senior Superintendent and became the first female member of a roundtable meeting. She aims to reform W Prefectural Police.

Sato Hitomi as Kumakura Sei
A police sergeant with W Prefecture’s Narumi Police Precinct. Her father Kumakura Tetsu was also a police officer. He was a role model for police officers but died mysteriously.

Satsukawa Aimi as Katsuragi Chisa
A police sergeant with W Prefecture’s Nogura Police Precinct’s Community Safety Bureau. In high school, she placed third in the prefecture for judo, but she could not do anything when she was molested because she is so reserved. She wants to become strong. She accused her superior of sexual harassment.

Tanimura Mitsuki as Kusaka Rinko
A police officer with W Prefecture’s Tatsusawa Police Precinct’s Criminal Investigations Division. She has special feelings for her boss Uehara who is in the same division.

Yuki Mio as Chiharu
She secretly has feelings for the veteran Nojiri Tsuneyuki from W Prefecture’s Forensics – Organisational Policy Division. She has a special ability to search out things because of her fine sense of smell.

Toda Naho as Kanei Satomi
A police sergeant with W Prefecture’s Hongo Police Precinct who is in charge of thieves. She is stressed about her work and family but even so she makes great effort every day because of juvenile crime. However, there is a grave secret behind this.

Suzuki Sawa as Takadera Sayuri
A police sergeant with W Prefecture’s Kitamoto Police Precinct’s Organised Crime Division. Although she is a detective, she is in a forbidden relationship with a member of a designated organised crime group. She tries to make this secret relationship work but … …

Tokoshima Yoshiko as Takizawa Sumie
A police sergeant with W Prefecture’s Hio Police Precinct’s Criminal Affairs Division. She once quit as a police officer and became a housewife. However, she returned to work after her husband developed depression. She turns herself in for killing her father who is a priest in a Catholic church, but … …

Ito Kazue as Shimoda Yuri
A police sergeant with W Prefecture’s Saruwatari Police Precinct’s Juvenile Division. A single mother who is strict in the upbringing of her daughter Anna. However, when Anna goes missing, Matsunaga Nahoko also gets involved and the hands of fate start to move … …

This blog contains information and musings on current and upcoming Japanese dramas but is not intended to be comprehensive.
View all posts by jadefrost →
This entry was posted in Summer 2019 Dramas, TV Tokyo and tagged Ashina Sei, Satsukawa Aimi, Suzuki Sawa, Tanimura Mitsuki, Toda Naho, W Kenkei no Higeki. Bookmark the permalink.