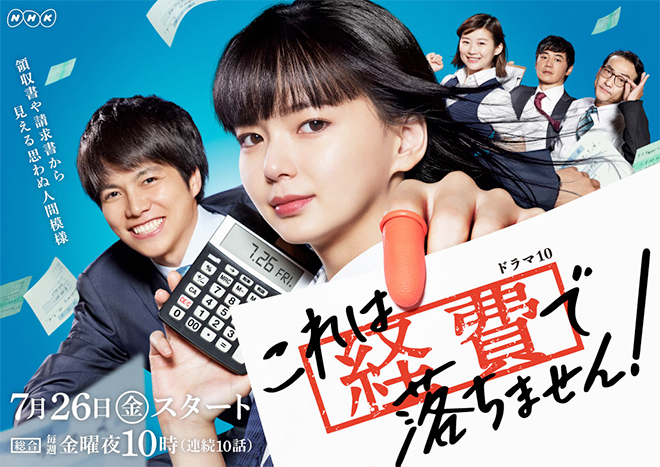 Story
Moriwaka Sanako, a single young woman near 30, works for the accounting department of Ten Ten Corporation, a soap manufacturer. Sanako, Sasaki Mayu, Takura Yutaro review expenses every day together with their boss Shibata Hideki. Sanako’s motto in life is the same as a balance sheet – to balance everything in life. She checks the receipts and invoices that come to her. Only the amount of money and minimal reasons are written on each slip. However, when Sanako carefully scrutinises them, she is able to see questionable facts of the people concerned or their troubles. Sanako truly does not want to go after something that is none of her concern. But it is impossible for her to overlook those who mix business with personal affairs. As a low-ranking employee in the accounting department, how will she approach these dishonest people and establish an equal relationship? One day, Yamada Taiyo from the sales department comes to Sanako with a receipt for grilled octopus balls. He has become the chief of a new parlour cafe project which integrates a hot spring and a cafe. The person Yamada met was Sonezaki Mirei, the designer commissioned to design the cafe’s interior. Mirei is a beautiful woman who does not look her age and a famous person who has even appeared on TV. After that, Yamada brings another receipt for tickets to a theme park that he visited with Mirei for research. However, there happen to be rumours that he recently went on a date at the same theme park with a female colleague. Sanako suspects that it was actually for personal use, but … …

Characters
Tabe Mikako as Moriwaka Sanako
A member of the accounting department. She is excellent in her work and also a perfectionist in her personal life. She keeps her distance from people to do things at her own pace, and she is a late-bloomer in romance. “Don’t chase rabbits”, which means stay away from things that are not her business, are the words she lives by.

Shigeoka Daiki as Yamada Taiyo
The young ace of the sales department. He gets involved with Moriwaka Sanako because of a controversy and falls for her. He makes a move on Sanako despite her naivety. He gets carried away easily but he is a good young man with a kind smile that dazzles.

Kiriyama Ren as Yamazaki Shuichi
Yamada Taiyo’s senior at the sales department. Unlike Yamada he is cool but he is good at getting into people’s pockets and is the number one in sales performance. Moriwaka Sanako respects him.

Hirayama Hiroyuki as Takura Yutaro
Moriwaka Sanako’s senior. He is in charge of the production department. Sanako takes her cue from his calmness and seriousness towards his job.

Fukikoshi Mitsuru as Shibata Hideki
The head of the accounting department who is Moriwaka Sanako’s boss. He and the head of the sales department Yoshimura Akihiro were senior and junior back in university and they are not on good terms. He appears to be very serious but is actually quite a humorous character.

This blog contains information and musings on current and upcoming Japanese dramas but is not intended to be comprehensive.
View all posts by jadefrost →
This entry was posted in NHK, Summer 2019 Dramas and tagged Fukikoshi Mitsuru, Kore wa Keihi de Ochimasen!, Tabe Mikako. Bookmark the permalink.