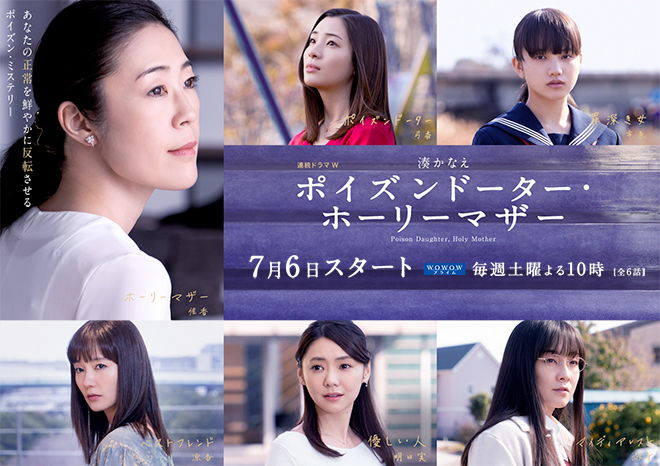 Poison Daughter, Holy Mother
Story: Actress Fujiyoshi Yumika (Adachi Rika) has been troubled by her mother Yoshika’s (Terajima Shinobu) excessive interference since young. She regards her mother who tries to control her the way she wants, as a toxic parent. Yumika runs to Tokyo in an act of rebellion but she is unable to break free. When she returns home for the wedding of her good friend Riho (Yamashita Rio), Yumika is reunited with an ex-classmate Asaoka (Ochiai Motoki) and falls in love. She even gets an offer for the leading role in a new drama. Just when she feels that she is starting to do well in life, her mother’s machinations cause her to split up with the man and lose important work. Learning about this, Yumika releases her pent-up feelings about her mother on a television talk show and this generates tremendous response. Meanwhile, the people who know Yoshika, regard her as a caring mother and certainly not a toxic parent. Yoshika reflects on her own life after hearing what Yumika said, and decides to let go of her daughter. But … …
Cast: Terajima Shinobu, Adachi Rika, Yamashita Rio, Ochiai Motoki, Yamada Anna, Murata Hideaki, Tosaka Junichi, Kataoka Reika, Watanabe Makiko, Miyazaki Yoshiko

Tsumibuki Onna
Story: A youth called Masayuki (Takahashi Yuto) carries out indiscriminate mass killings at a shopping mall. Despite persistent interrogation, he refuses to disclose his motive. Then a girl call Yukina (Kiyohara Kaya) appears at a police station and begins her statement with the words, “I’m entirely to blame.” According to Yukina, she has lived in the same apartment with Masayuki since childhood and the two of them have an emotional connection even now. At first, the lawyers consider her confession important, but … …
Cast: Kiyohara Kaya, Takahashi Yuto, Misaki Ayame, Nakagawa Nozomu, Akizuki Mika, Minemura Eri, Sakai Maki,

Best Friend
Story: Ryoka (Nakamura Yuri) works at a factory for wet towels while aspiring to become a scriptwriter. However, it has been eight years and she has not gained much popularity. Then one day, she receives a phone call about winning the grand prize in a competition for scripts by newcomers. Ryoka heads to the award presentation ceremony in high spirits, and meets the grand prize winner Karuko (Yamada Maho). Although Ryoka is scornful of the quiet and awkward Kaoruko in private, Kaoruko gradually gains public recognition and Ryoka who had been conveniently used by a producer (Wada Masato) grows impatient.
Cast: Nakamura Yuri, Yamada Maho, Wada Masato, Onoue Hiroyuki, Komakine Ryusuke, Komiya Takayasu, Nakamura Kumi,

Yasashii Hito
Story: Asumi (Kurashina Kana) grew up being told by her mother Mikiko (Akama Mariko) to be a kind person from a young age. Because of that, she treats everyone kindly both in school and in office. She is the only person in the company who is kind in her dealing with her colleague Tomohiko (Hamano Kenta) who is a repeated failure. But one day, a colleague called Junya (Okuno Eita) who joined the company as a mid-career hire, points out to Asumi that “a person who is kind to everyone, is kind to no one”, and something in Asumi starts to change.
Cast: Kurashina Kana, Hamano Kenta, Okuno Eita, Yanagi Yurina, Minosuke, Chiba Masako, Akama Mariko

Muddy Arrest
Story: Yoshiko (Ito Ayumi) is the exact opposite of her free-spirited younger sister Arisa (Satsukawa Aimi). She has never left their hometown and still lives with their parents even though she is now 40. She only opens up to her cat name Scarlet. There have been a series of disturbing cases of pregnant women being attacked in this town of all places. In the midst of this, Arisa returns from Tokyo pregnant all of a sudden. Their mother Kazuko (Umezawa Masayo) who has been hard on Yoshiko is indulgent with her younger sister. As the atmosphere in the house begins to change, Yoshiko’s world starts to collapse.
Cast: Ito Ayumi, Satsukawa Aimi, Uda Takaki, Kameda Yuki, Umezawa Masayo

This blog contains information and musings on current and upcoming Japanese dramas but is not intended to be comprehensive.
View all posts by jadefrost →
This entry was posted in Summer 2019 Dramas, WOWOW and tagged Ito Ayumi, Kiyohara Kaya, Kurashina Kana, Poison Daughter Holy Mother, Terajima Shinobu. Bookmark the permalink.