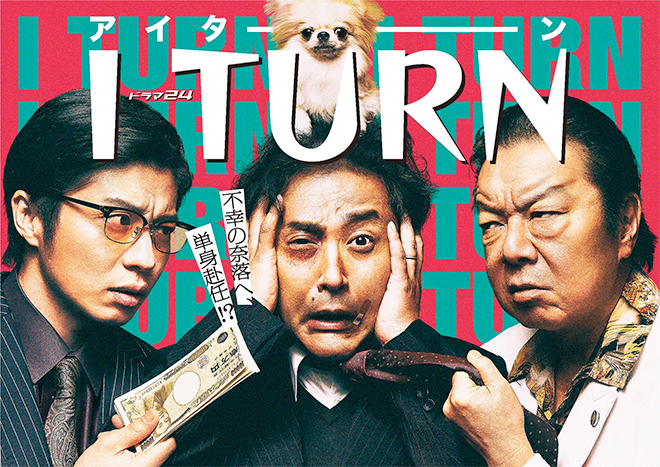 Story
45-year-old Komae Mitsuo is a salesman who works for a mid-sized advertising agency. He gets demoted from the head office and transferred to a small branch office in the countryside. He has to leave his wife Atsuko and daughter behind in Tokyo and go alone to Ashura City, the furthest town in Japan. Komae becomes the manager of the dinky branch office which only has a pathetic two employees. He is stuck with the unreasonable demand to boost performance or face immediate closure and dismissal. With a home loan and his daughter’s further education to consider, Komae plans to increase sales with the skills he honed back at headquarters. Meanwhile, he receives a sudden phone call from a client regarding the production of new flyers they have undertaken. This is the beginning of a nightmare. The CEO, Ryuzaki Kenji, has one of these flyers in his hand and he is absolutely furious. A grave mistake is about to change Komae’s life dramatically. He finds out that his client is a company run by a gang called Ryuzaki-gumi. Komae is doomed. To make matters worse, Iwakiri Takeshi, the boss of Iwakiri-gumi, storms in to complain. Komae is suddenly caught between two gang bosses. Furthermore, Iwakiri forces him to become an underling in his gang. Now Komae has to lead a dangerous double existence as an ad man and gangster. How this man who is caught in an endless loop of misfortune regain himself?!

Characters
Muro Tsuyoshi as Komae Mitsuo
A salesman who works for Senkokusha, a mid-sized advertising agency. He is demoted from the head office and transferred to a small branch office in Ashura City in the countryside. He is made an underling of the gangster Iwakiri Takeshi and gets in the blacklist of Ryuzaki Kenji who is at odds with Iwakiri Takeshi as he leads a double existence as an ad man and gangster. Caught between two gang bosses with strong personalities, he is forced to make extreme choices.

Furuta Arata as Iwakiri Takeshi
The boss of Iwakiri-gumi. He is one of the two big gangsters who control Ashura City, Japan’s furthest town. Although he has a small gang of only five members, he is an old-fashioned man who values loyalty and sentiment. He never betrays his buddies, but he is merciless to those who betray him. He ends up forcing Komae Mitsuo to be a member of Iwakiri-gumi. He is hostile towards the Ryuzaki-gumi which Ryuzaki Kenji leads.

Tanaka Kei as Ryuzaki Kenji
The boss of Ryuzaki-gumi. He is also the CEO of a consumer finance firm. A hard-nosed, calculating gangster, he is the complete opposite of Iwakiri Takeshi and they dislike each other. Unlike the old-fashioned Iwakiri, he rose to the top with a new way of doing things. He schemes to make use of Komae Mitsu and destroy the Iwakiri-gumi.

Suzuki Airi as Yoshimura Mizuki
A clerk who works for Senkokusha’s Ashua City branch. She does things as she pleases, and has no interest in work or romance. She somehow gets by each day, but is influenced by Komae Mitsuo and begins to change little by little.

Watanabe Daichi as Yanagi Naoki
A salesman who works for Senkokusha’s Ashua City branch. He is one of two employees in the office. He is unmotivated, and comes to work late and looking sloppy. He seems to handle work without much interest, but is actually enthusiastic.

Kuroki Hitomi as Reika
The proprietress of the bar called Limelight. She is on friendly terms with both the Iwakiri-gumi and Ryuzaki-gumi and provides a soothing place. She is good at fortune telling with tarot cards and this divination even gives Komae Mitsuo advice.

This blog contains information and musings on current and upcoming Japanese dramas but is not intended to be comprehensive.
View all posts by jadefrost →
This entry was posted in Summer 2019 Dramas, TV Tokyo and tagged Furuta Arata, I Turn, Kuroki Hitomi, Muro Tsuyoshi, Tanaka Kei. Bookmark the permalink.