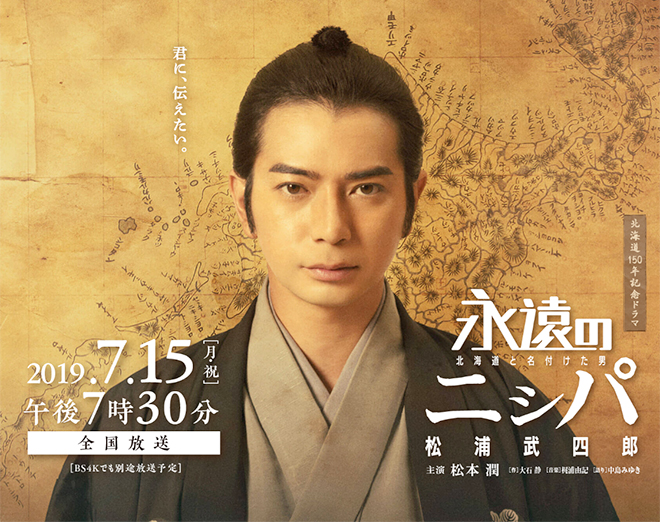 Date: From 7.30 p.m., 15 July 2019
Scriptwriter: Oishi Shizuka (Ie Uru Onna Series, Dairenai, Totto-chan)
Cast: Matsumoto Jun, Fukada Kyoko, Ukaji Takashi, Kimura Shogo, Kakei Toshio, Yamada Yoshiaki, Ishii Masanori, Ishikura Saburo, Saito Ayumu, Shogaki Minato, Arizono Yoshiki, Nishimura Masahiko, Kohinata Fumiyo, Eguchi Yosuke
Synopsis: The Edo shogunate faced an unprecedented crisis of being forced by the Western powers to open up with the arrival of Matthew Perry’s black ships and Russian demands to demarcate the border. The explorer and geographer Matsuura Takeshiro (Matsumoto Jun) decides that Ezo, the land of the Ainu as Hokkaido was then called, had to be protected from Russia and would travel there six times between the ages of 28 and 41. His exploration of Ezo is guided by the Ainu. Takeshiro develops close ties with them and identifies with the richness of Ainu culture and kindness of the people. However, he witnesses firsthand the exploitation and looting of the Ainu by the Matsumae Domain which controls Ezo. One day, Takeshiro encounters Rise (Fukada Kyoko), a beautiful Ainu woman who lives in a village he visits. She has been protecting her family (Ukaji Takashi, Kimura Shogo, Shogaki Minato), but has a past that she does not talk about much about. He is struck by the look of sorrow in her eyes. When Takeshiro returns to Edo, he publishes a map of Ezo and exposes the harsh reality facing the Ainu. This angers the Matsumae Domain which obstructs Takeshiro, and finally sends assassins to try to kill him. Although Takeshiro is being pursued for dear life, he is appointed by the shogunate which demands haste in developing Ainu land to protect against Russia’s southern advancement and once again surveys Ezo. Following the Meiji Restoration, he proposes the name Hokkaido with kanji characters denoting “northern lands of the Ainu” which served as the basis for the new government’s eventual choice of the kanji “north” and “sea”.
Official Website: www.nhk.or.jp/sapporo/nispa

This blog contains information and musings on current and upcoming Japanese dramas but is not intended to be comprehensive.
View all posts by jadefrost →
This entry was posted in NHK, Summer 2019 Drama Specials and tagged Eguchi Yosuke, Eien no Nispa, Kohinata Fumiyo, Matsumoto Jun. Bookmark the permalink.