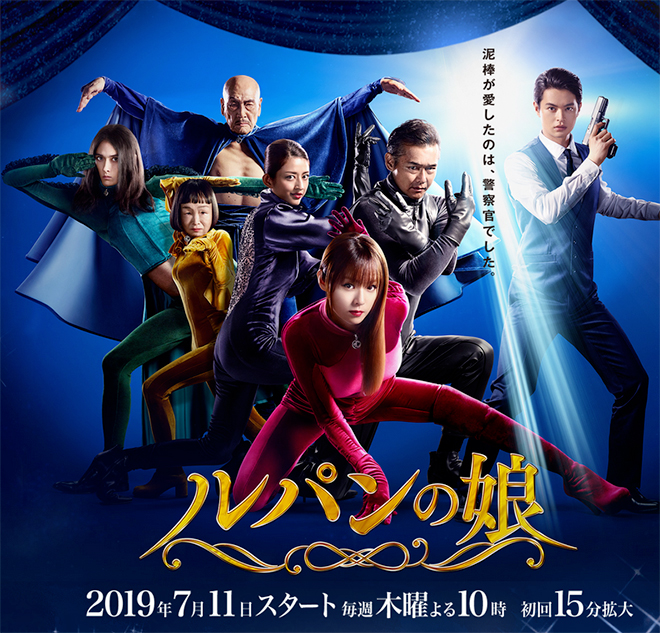 Story
Mikumo Hana works at a library and is seriously dating Sakuraba Kazuma. One day, Kazuma decides to introduce her to his family and she gets extremely nervous. Kazuma’s father Norikazu speaks in a stern tone while his mother Misako looks shocked by Hana’s workplace. Hana had only heard that Kazuma is a civil servant, but now she realises that the Sakuraba family comes from a long line of police officers. Hana shudders after she hears this. Then she learns that Kazuma belongs to the Tokyo Metropolitan Police Department’s Third Investigation Division which specalises in catching thieves … … Kazuma sends Hana back and she goes into an ordinary house. When his car leaves, she stealthily slips out and heads to the upper floors of a high-rise apartment building. This is actually where the Mikumo family lives. Hana is ushered inside by her mother Etsuko who is holding an expensive cat, father Takeru who is having wine with caviar and grandmother Matsu who is in the middle of handling a pufferfish. However, the cat, caviar as well as the pufferfish have all been pilfered from other people. The Mikumo family is a family of thieves. Hana considers giving up Kazuma. Meanwhile, Kazuma is told by Norikazu that he will approve of his relationship with Hana once he becomes a detective of the First Investigation Division. When Kazuma consults a senior detective in the Third Investigation Section, he is advised to arrest L’s clan, an entire family which has been professional thieves for generations and is famous even within the Tokyo Metropolitan Police Department. Labelled L, the clan never gives itself away. But they do not steal from the weak, just like Arsène Lupin’s audacious crimes. Kazuma resolves to capture them even though no one knows who they are. However, this family, is Hana’s family, the Mikumos.

Characters
Fukada Kyoko as Mikumo Hana
The daughter of the L clan, she is the most talented at stealing among her family members. But she refuses to inherit the family business and lives an ordinary life working as a librarian. Even though the family’s motto is to only target villains, her boyfriend Sakuraba Kazuma whose duty is to arrest thieves, understandably gets involved every time. He occasionally gets attacked by villains and ends up in dire straits. Although she feels conflicted, she ends up helping her family of thieves against her better judgement in order to save her beloved Kazuma.

Seto Koji as Sakuraba Kazuma
He brings Mikumo Hana home to his family but their marriage is opposed by his parents just because Hana is not a police officer. It has been the Sakuraba family’s long-cherished wish to produce a detective with the First Investigation Division. So he makes his parents approve of his marriage to Hana on condition he transfers to the First Investigation Division from the Third Investigation Division. He yearns to perform a great deed in order to transfer, and targets the arrest of L’s clan, a family of thieves that is famous even within the Tokyo Metropolitan Police Department.

Watabe Atsuro as Mikumo Takeru
Mikumo Hana’s father who is a thief specialising in works of art. He is refined and a dandy. Besides art works, he “procures” caviar and expensive wines from the other residents of the fashionable high-rise apartment building where the Mikumo family lives. As the decision-maker of the Mikumo family, he is not pleased that Hana will not take over the family business and Wataru is a social recluse, fearing that the family will end with his generation.

Ozawa Maju as Mikumo Etsuko
Mikumo Hana’s bewitching mother who is a thief specialising in jewellery. Because of her desire for beauty, she looks very young for her age and nothing like a 55-year-old. She is always in flashy outfits. She and her husband mess around like love birds but she does a great job when the time comes to steal.

Kurihara Rui as Mikumo Wataru
Mikumo Hana’s older brother. Although he is the eldest son and rightful heir of the family, he never leaves his room. A hardcore social recluse, even his parents have given up on him because he communicates in an artificial voice with the family through a tablet … … However, like father like son, he is a top hacker who steals information through the internet.

Onuki Yusuke as Enjoji Akira
A thief who is in love with his childhood friend Mikumo Hana. He bothers Hana when he appears in front of her all of a sudden. He has an annoying habit of striking a musical note in the middle of a conversation. He tries his best to win Hana’s heart but … …

Shida Masayuki as Sakuraba Norikazu
Sakuraba Kazuma’s father. The pillar of the dignified Sakuraba family and the head of the Tokyo Metropolitan Police’s Special Assault Team. Although he is opposed to marriage between Mikumo Hana and his son Kazuma, his dearest wish is for the family to produce a detective with the First Investigation Division. If Kazuma can make this come true, he will approve the union.

Marcia as Sakuraba Misako
Sakuraba Kazuma’s mother who is an adjunct with the crime lab. A cool, collected as well as sharp woman, she is opposed to Mikumo Hana dating her son Kazuma and feels irritated with Hana will not leave him. On the other hand, she detects a faint whiff of crime from the strange vibes of the Mikumo family.

Maro Akaji as Mikumo Iwao
Mikumo Hana’s grandfather. A legendary pickpocket. He drilled a young Hana in the skills and knowledge to be a thief. Because he typically stays away from home, he is treated as dead by his wife Matsu, but he occasionally makes an appearance.

This blog contains information and musings on current and upcoming Japanese dramas but is not intended to be comprehensive.
View all posts by jadefrost →
This entry was posted in Fuji TV, Summer 2019 Dramas and tagged Fukada Kyoko, Lupin no Musume Series, Seto Koji, Tokunaga Yuichi, Watabe Atsuro. Bookmark the permalink.