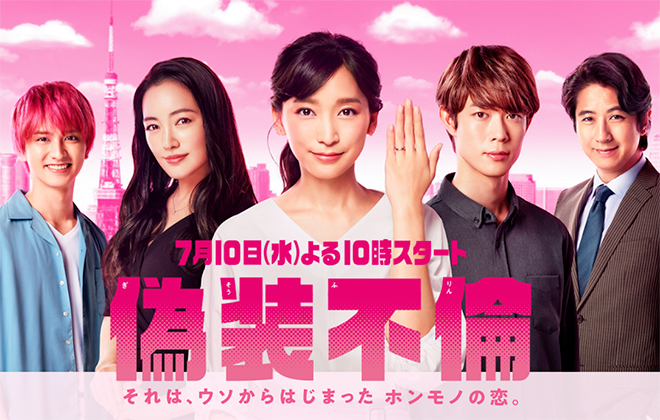 Story
32-year-old Hama Shoko has never had a serious relationship and lives with her parents, older sister Yoko and Yoko’s husband Kenji. Nothing has come out of an arduous three-year search for a marriage partner, but gossip swarming around about affairs. On the day that her temporary employee contract with her workplace ends, Shoko resolves to stop looking for a husband since marriage has no meaning if everyone is fooling around. Meanwhile, Shoko’s older sister Yoko is a career woman. She got married to the perfect man three years ago despite being seemingly plain-looking and strait-laced, and has been leading a happy married life. She accuses Shoko of travelling by herself again as Shoko starts packing for a solo trip to celebrate the end of her search for a husband. The next day, as Shoko leaves for Hakata, she realises that there is a wedding ring in the pocket of the dress she had borrowed from her sister. The moment she boards her flight, she is suddenly hit on the head by a falling suitcase and ends up dropping the ring. The person who holds out the ring to a flustered Shoko is Banno Joe, the owner of the fallen bag. Shoko feels shaken by this charming, handsome younger man and pretends that she is already married. The two of them end up having a meal together in Hakata. Shoko keeps up the pretense that she is someone’s woman instead of a spinster. She gets an unexpected chance at romance with this “married” tag when he proposes that she have a fling with him during this trip. Shoko learns the joy of romance for the first time through this “limited-time romance”. Although she tells herself that this is an affair to Joe and not pure love, she gradually falls too deep. Can this happiness be called true happiness?

Characters
Anne as Hama Shoko
A temporary employee who is single and weary of looking for a marriage partner. Because she still lives with her parents, she is labelled a “parasite single”. She is not good at romance and always viewed as a person who overreacts. She likes travelling and meets Banno Joe while on one of her trips. She unintentionally lies that she is married and gets a chance at an unexpected romance.

Miyazawa Hio as Banno Joe
A 25-year-old freelance photographer. He was born in Fukuoka Prefecture and spent his childhood there, but moved around Europe from the age of 10 due to his father’s work. He suddenly returns to Japan as a result of some incident. He bunks in with his older sister Akari who runs a Spanish restaurant in Tokyo but meets Hama Shoko on a plane bound for his hometown of Fukuoka.

Nakama Yukie as Yoshizawa Yoko
Hama Shoko’s older sister. A career woman who works for a consulting firm. She is plain and strait-laced. Three years ago, she suddenly married the handsome Yoshizawa Kenji and surprised her family. She has a marriage that is the envy of everyone and does not seem to be unhappy about anything. However, she is actually pretending to be single and having an affair with a younger man.

Seto Toshiki as Yagami Futa
A professional boxer. He is the friendly type who is good at acting spoiled, and appeals to maternal instincts. However, as a professional boxer, he hates to lose. He meets Yoshizawa Yoko without realising that she is married and is attracted to her.

Tahihara Shosuke as Yoshizawa Kenji
Yoshizawa Yoko’s husband. He works for a trading company. Besides his height and good looks, he is good-natured and affable. He is the ideal husband who readily agreed to live with Yoko’s parents and is also concerned about his sister-in-law Shoko.

Tanaka Michiko as Yamada Masako
Hama Shoko’s good friend who is also a temporary employee. She works hard at searching for a husband with Shoko. But she is not popular for some reason even though she is a beauty.

This blog contains information and musings on current and upcoming Japanese dramas but is not intended to be comprehensive.
View all posts by jadefrost →
This entry was posted in NTV, Summer 2019 Dramas and tagged Anne, Gisou Furin, Miyazawa Hio, Nakama Yukie, Tahihara Shosuke. Bookmark the permalink.