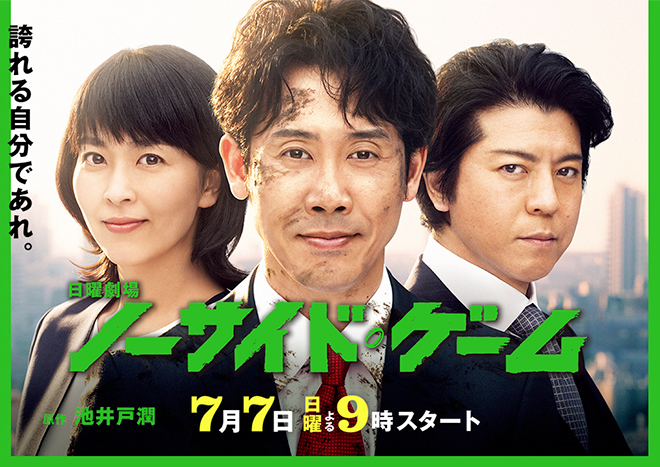 Story
Kimijima Hayato, a mid-level salaryman who works in the corporate strategy office of the headquarters of a large manufacturer Tokiwa Motors, is said to be leading the field of candidates for an executive position. He lives happily with his wife Maki and their two sons Hiroto and Naoto. However, one day, Kimijima is relegated to be the administrative manager of a regional plant as a result of opposing a major M&A deal pushed by his boss Takigawa Keiichiro. This transfer is against his wishes but this is also the fate of a salaryman. A disconsolate Kimijima takes up his position at the plant after a pep talk from Maki. On his first day, he is introduced by Sakura Tae, an employee of the general affairs department, to Tokiwa Motors’ rugby team Astros including the captain Kishiwada Toru. Kimijima is ordered to double as the general manager of Astros. Established with CEO Shimamoto Hiroshi’s help, Astros was once a mighty team. However, the team has been mired in a slump and drained an enormous 1.4 billion yen, resulting in whispers that it is the company’s burden. None of the members are keen on Kimijima who lacks knowledge and experience in rugby. However, like Kimijima, who has no hope for career advancement, they have their backs to the wall. Kimijima begins his battle to make a comeback with the struggling rugby team. Saimon Takuma who has experience coaching university rugby clubs is invited to be the coach of Astros, and becomes his partner in rebuilding the team.

Characters
Oizumi Yo as Kimijima Hayato
The administrative manager of Tokiwa Motors’ Fuchu plant and general manager of Astros. As as an elite employee, he has built a successful career over 25 years. However, he was transferred from headquarters to this plant for opposing the M&A deal pushed by his boss Takigawa Keiichiro. He is also ordered to be the general manager of Astros which has drained the company of 1.4 billion.

Matsu Takako as Kimijima Maki
Kimijima Hayato’s wife and mother of 8-year-old and 10-year-old sons. A cheerful optimist. While she understands her husband the most, she will not let him get too depressed and instead encourages him that it is not that big a deal. Like Kimijima, she will object to anything unreasonable or wrong no matter who the other party is.

Saigo Teruhiko as Shimamoto Hiroshi
The CEO of Tokiwa Motors. His family founded the company which has a history of 120 years. He has a great love of rugby and he supported the establishment of the platinum league which is the top league for non-professional teams sponsored by companies. He decided to set up Astros and join the league. He is the only person who is supportive of the team which has been described within the company as a burden for posting an annual deficit of 1.4 billion.

Otani Ryohei as Saimon Takuma
Astros’ coach who comes from the well-known Jonan University rugby club. Although he is a man of few words, he quietly burns with fighting spirit and is fixated on winning. He displays penetrating insight, deeper consideration for the team and overwhelming passion than anyone else. He has a past connection with Kimijima Hayato. He pushes through numerous reforms to make Astros win.

Nakamura Shikan as Kazama Yuya
The third-generation CEO of Kazama Trading. He is the man involved in the M&A deal that got Kimijima Hayato transferred to a regional plant. He has some agenda and his presence soon begins to shake up the whole of Tokiwa Motors.

Watanabe Hiroyuki as Tsuda Saburo
A high-profile alumni of Jonan University which is famous for its rugby. He is the great commander of the Cyclones, the champion of the platinum league. A central figure of Japan’s rugby world who is known to everyone. He is the person responsible for Saimon Takuma’s dismissal as Jonan University’s rugby club’s coach. He respects tradition and deeply loathes Saimon who has pushed through reforms and trampled on tradition.

Kamikawa Takaya as Takigawa Keiichiro
The managing director and sales chief of Tokiwa Motors. A man on the fast track, he is regarded as a candidate to be the next CEO. He has an imposing presence and a way with words, and is viewed with awe within the company. He considers Kimijima Hayato who opposed the M&A deal that he raised as his nemesis and begins hostilities.

Original Work
No Side Game by Ikeido Jun

This blog contains information and musings on current and upcoming Japanese dramas but is not intended to be comprehensive.
View all posts by jadefrost →
This entry was posted in Summer 2019 Dramas, TBS/MBS and tagged Kamikawa Takaya, Matsu Takako, No Side Game, Oizumi Yo, Otani Ryohei. Bookmark the permalink.